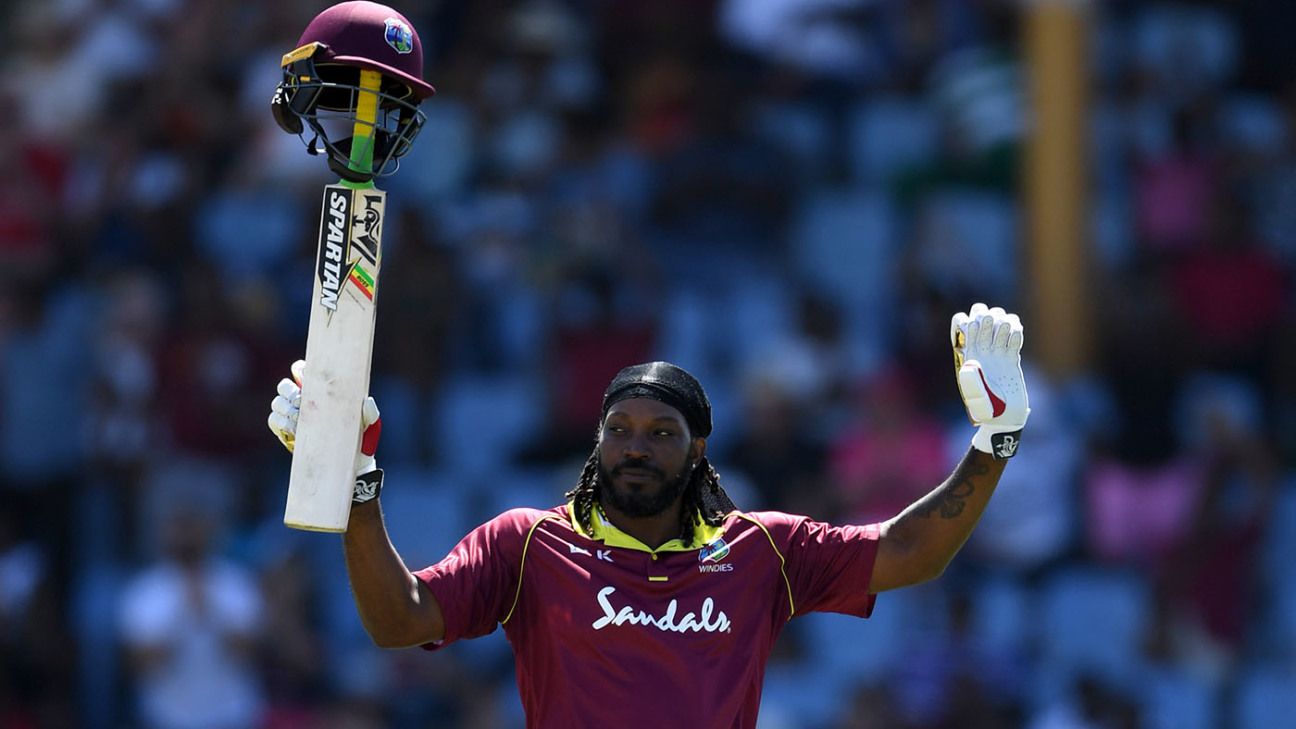 It looked like a goodbye. And, as Chris Gayle reflected on his remarkable ODI series against England, it started to sound like one as well.

Gayle had just rounded off his incredible series – 424 runs in four innings at a strike-rate of 134.17 – with an innings of 77 in 27 balls that included the fastest half-century (19 deliveries) by a West Indies batsman in the history of this format. He hit 39 sixes from the 316 balls he faced in the series – a record in either series or tournaments of any length – meaning he hit, incredible though it sounds, every 8.10 balls he faced for six.

And while he said, only days ago, he could yet be persuaded to extend his career beyond the World Cup, as he walked off here – turning to salute all corners of the ground – it looked pretty clear that he would not be back.

“This is my last ODI series in the Caribbean,” he said. “So I was giving the fans a nice wave. Right through the tournament they have been superb from both sides: West Indies and England sides. It would be nice if it was in Jamaica, but the crowds have been fantastic.

It hasn’t always seemed that way. When he flew into London from the IPL 48 hours ahead of the Test series against England in 2009 – he was captain at the time – it seemed representing the region’s team was getting in the way of his T20 career. Equally, when he was alleged to have been seen in the party stand not long his side had been defeated by England in 2004, when he was embroiled in a long-running stand-off with the board, or castigating the selectors for their failure to pick Dwayne Bravo and Kieron Pollard for the 2015 World Cup it didn’t always appear that West Indies was his top priority.

And, if he didn’t care, how has he played until he was 39 and when, at times, he has clearly been struggling with injury? And, if it sometimes seemed he had an eye on the T20 dollar, well, why shouldn’t he? The history of cricket is full of episodes when players have been chastised for trying to increase their earning opportunities. On nearly every occasion – the rebel tours perhaps offering the greatest exception – history has vindicated them. Gayle has played 100 Tests and nearly 300 ODIs. He could have limited himself to the T20 circuit years ago if he wasn’t committed to West Indies cricket.

While Gayle rebuffed the suggestion he is in the form of his life – “My better ODI form was in India when Carl Hooper was captain,” he says, “I made three centuries in that series and I made two here” – he accepted he might never have played better in a home series.

“I’m thankful for the form,” he said. “I wasn’t getting any runs in the T20 tournaments I was playing. When you get a chance to score runs, make sure you score heavy. But it’s the best [I’ve played] in my home conditions and I’m happy and grateful for that.

“I’m not surprised by how well I’ve done. Or the number of sixes. Sixes come along. It’s just natural, to be honest. In T20s I score a lot of sixes as well, but this is the first time in an ODI series. To hit 39 sixes aged 39: it’s fantastic from a personal point of view.

It sounds as if he still enjoys it, doesn’t it? And you can tell, it’ll be a wrench to leave. And maybe, just maybe, he is keeping the door open a crack.

“You’ll just have to wait and see,” he says. “There’s still a long way to go. Let’s just carry on with life.”

West Indies cricket will miss Chris Gayle. World cricket, even. And, it seems, he’ll miss it a little more than it sometimes appeared.