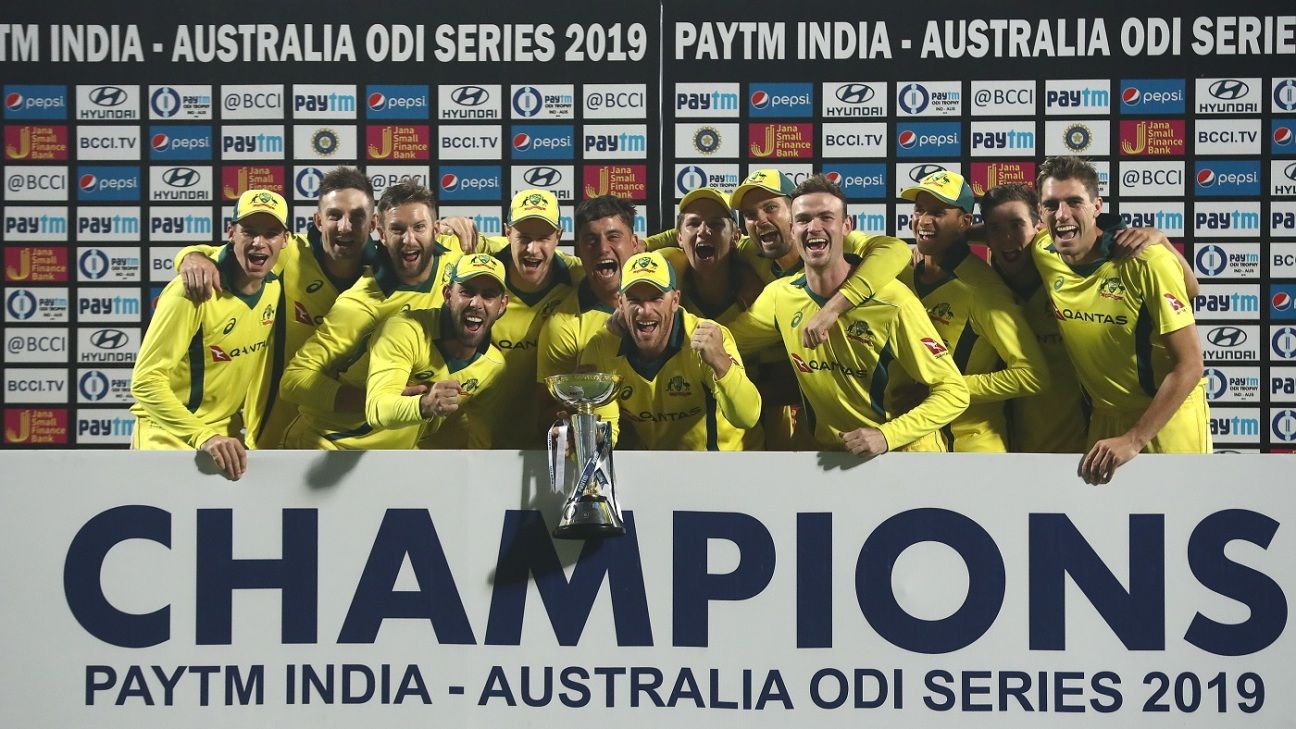 A matter of weeks ago, Australia’s touring team arrived in India with quiet optimism but little else. There had been scarcely a break since a draining home summer, and in the case of Aaron Finch, Glenn Maxwell and Marcus Stoinis, all participants in the Big Bash League final, only a few snatched hours of sleep before they were on the plane to India.

Benefiting from the rare format continuity, the T20 side emerged victorious in the two-match entree, but after a pair of opening defeats in Vizag and Bangalore, the second from a position where the Australians really should have won, it appeared that both the ODI sides; time in the wilderness would be continuing.

Finch’s side had other ideas however, and over the ensuing three matches something notable emerged. Suddenly, Australia looked to be balanced, confident and capable, able to win game on three different pitches and in a variety of scenarios. Ashton Turner’s fireworks in Mohali were undoubtedly the highlight, taking the team coached by Justin Langer into the sort of territory that will cause even the World Cup fancies England to be worried, but there was much to savour in Ranchi and Delhi also.

Most importantly, the Australians have emerged from India with belief in their plans and their ability, whether it was in putting runs on the board beyond the opponent’s reach or chasing down a mighty total in Mohali that was also kept within reach by the excellent late innings bowling of Pat Cummins. Spin bowling has also been a feature: both Adam Zampa and Nathan Lyon can expect World Cup inclusion on the strength of their displays here.

“The resilience and fight that we showed being down 0-2, it would have been easy to roll over in those small moments in the game, just let them drift away and India win the series,” Finch said. “But the fight that we showed, we’ve had our backs against the walls for quite a while now so I’m really proud of the group.

“From 2-0 down to win 3-2 is pretty special. I’ve been coming here for a while now trying to win and haven’t, so have a lot of Australian players, so it’s a special moment. People have written us off for quite a while now. We always knew that the plans and the style that we wanted to play are all there, can win us the World Cup, win us big series against great teams and India are definitely a great team.

“It’s about ourselves believing we’re good enough and sticking to our game plan. We did that for four of the five games and India were too good in a close one in Nagpur. To get over the line in three of them was a great series all round.”

Reflecting on how Australia had found the right balance, albeit with a combination of circumstances dating back to the bans on Steven Smith and David Warner, and then more recently an injury to Marcus Stoinis that allowed Turner his chance, Finch reflected on the fact that the selectors had looked for a better combination of heavy hitters and strike rotators, namely Peter Handscomb and Usman Khawaja.

“If you go in with all attacking players in these conditions you’re going to struggle, because we know the wickets slow up and the quality of Chahal, Kuldeep, Jadeja these guys they’re too good to just walk out and blast them out of the park,” Finch said. “You need good batsmanship on these wickets and guys who know how to play situations.”

Another man with something to prove was Cummins, who did not enjoy being bullied by England’s top order in the home ODI series a little more than a year ago and has subsequently pointed out that he needed more time to hone his white-ball skills. In India, Cummins was granted the new ball for the first time in some years and used it expertly before returning to the crease later in the innings with equally strong effect.

“I’ve played a little bit of one-day cricket before but it felt like I hadn’t really clicked in this format,” Cummins said. “It felt like I bowled well in the Australian summer, so glad it keeps on clicking. Hopefully it continues for the World Cup.

“We always seem to peak around the World Cup. I wouldn’t want to be a selector, it’s going to be a tough job whittling the team down to 15 and there are obviously a few to come back as well. Especially the batsmen, I thought the way they played the spin let alone the quicks, to get those scores on these kind of wickets, they made it look a lot easier than they were.”

As far as selection is concerned, Cummins isn’t wrong. From a time a few weeks ago when Australia looked forlornly towards the returns of Smith and Warner. The success of the India tour now means that the suspended pair will have to do something many have wondered about in the 11 and a half months since they were ruled out: actually earn their places.