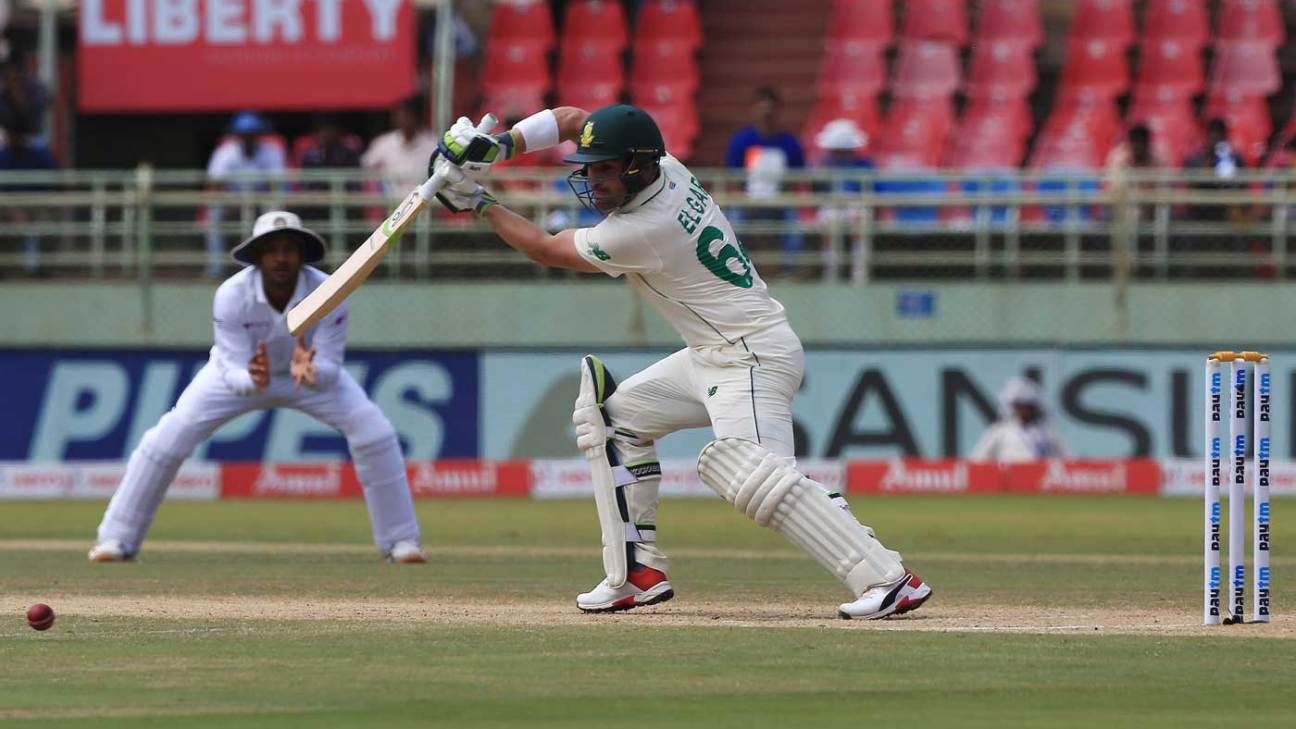 Dean Elgar does not usually need a reason to be determined but he went into this series with a few very good ones. At 32 years old, with a Test career in its seventh year, the South Africa opener is now a senior member and wanted to set the tone for all of his the team’s innings and an example for his younger team-mates to follow. Especially on a tour as tough as India.

Elgar said his 160 in Vizag was “maybe” his best for South Africa and it was easy to see why.

“You are always up against it and they [India] are always coming at you,” he said at the end-of-day press conference. “But I felt with previous experiences of playing against them that if you apply yourself and give yourself opportunity you can get there. If you allow yourself time, you give yourself the best opportunity with your defensive game, your attacking game will come naturally.”

The ability to grind out a score has always been a feature of Elgar’s game but here, he switched gears and took on the spinners. The proof lies in the numbers that are among the least looked at in Test cricket: boundaries. Elgar struck 18 fours and four sixes in his 160, the most by a South African in a Test innings against India, including a slog sweep of R Ashwin to bring up his century.

“It was me putting my stamp on my innings, not allowing them just to bowl to me which has happened in the past,” Elgar said.

History has to come up on this tour bus because of how poorly South Africa performed the last time they were in India. In 2015, they only totalled 200 once, as a team, and had no centuries between them. They left defeated, not just in the scoreline but also in morale, with the conclusion that they could not take on the turning ball more firmly entrenched. Though Elgar told Star Sports he considered the pitches used in that series a “farce,” it was still important to him to show that the stereotype about South African batsmen and spin is not entirely true.

“I’ve learnt over the last few years that I can play the spinning ball. I’ve played a lot of cricket around the world and developed my game in the county circuit and that’s why I ultimately go and play, to develop. It’s nice to see the results and all the hard work I have put in overseas pay off on days like today.”

“If you allow yourself time, you give yourself the best opportunity with your defensive game, your attacking game will come naturally”

Elgar on playing in India

Since the 2015 tour, Elgar spent a season at Somerset and two at Surrey and credited the domestic scene in the UK with improving his skills, especially against spin. “In county cricket, you face a lot of spin. The ball actually spins in England now because it’s so dry which is a good experience.”

Elgar’s personal development has also brought him to the realisation that South African needs him for more than just runs. In their current “building phase,” the team is relying on him, captain Faf du Plessis and wicket-keeper Quinton de Kock to be mentors. And all three made significant contributions to South Africa’s first innings.

“We’ve lost quite a few senior heads and our side needs some leadership and a few old faces to stand up because we’ve got some young faces here.” Elgar said.

Despite all this effort, South Africa still face the possibility of not being able to save the Test. They will have to bat last, on a surface that will deteriorate and will need the younger players, as well as the seniors, to stand up again. Whatever happens though, Elgar is hopeful that South Africa can be a world-beating force again and asked the fans to keep the faith.

“We’ve got some experienced heads who have played a lot of domestic cricket back home and they know the environment and then you’ve got a lot of young guys who are immensely talented. They need time to grow and they are going to fail. That’s a foregone conclusion that young guys are going to fail but it’s how you as a senior group allow them to fail and allow them to grow.