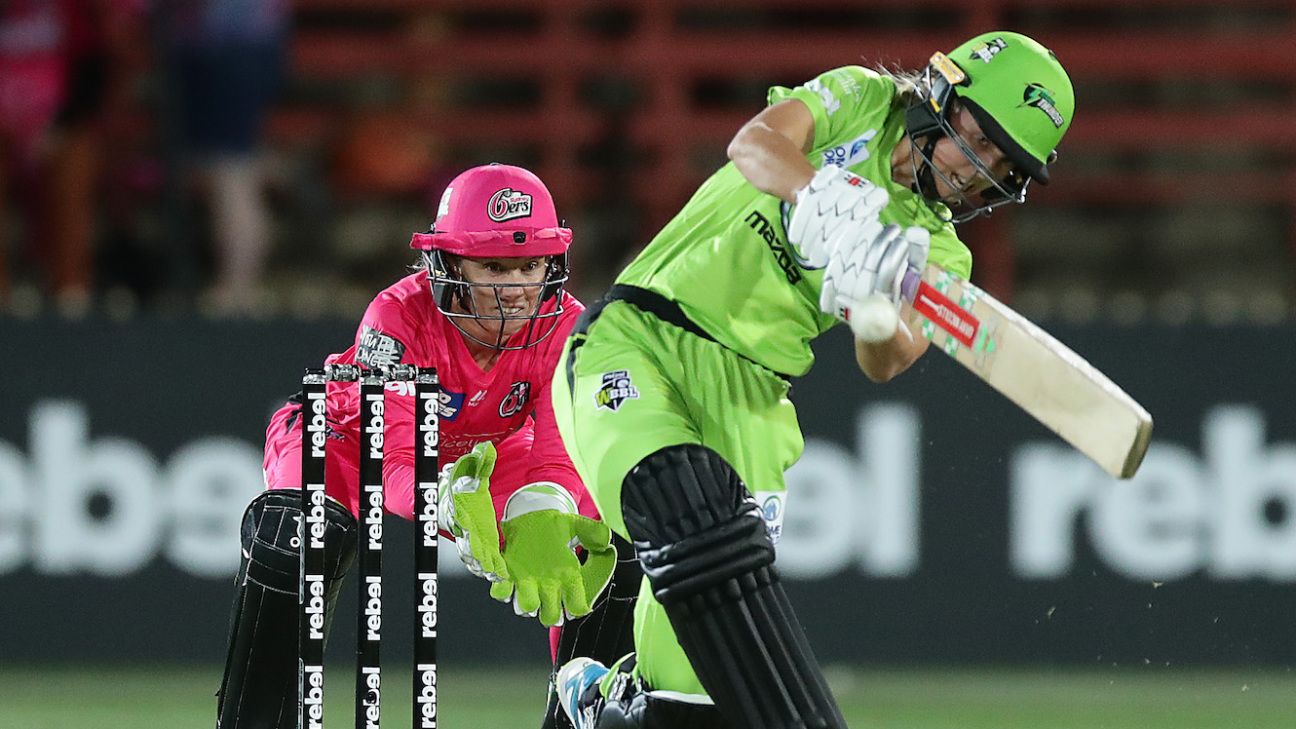 The past, present and most definitely the future of the Australian cricket team was on display at North Sydney Oval on Friday.

Alex Blackwell, who was capped 251 times by her country, padded up for another WBBL season and struck 56 off 38 balls. Ellyse Perry and Alyssa Healy, two stars of the current world-beating Australia side, did what they often do and sent the ball to all parts.

And then there was a 16-year-old on debut who will, probably sooner rather than later, be part of that Australia team.

Phoebe Litchfield only lasted 22 balls, but played out in front of a worldwide TV audience the innings went to reinforce why she has been talked about as one of the most talented players of the next generation.

Earlier this year, a video posted on Twitter by New South Wales of Litchfield batting the nets went around the world. “I sort of didn’t know at the time,” Litchfield told ESPNcricinfo. “I thought they were just videoing our whole squad and then my friend was like ‘nice video’ and I was confused at the start, but it’s got a lot of views which puts on a bit of pressure on.”

There was only a few days to get her head around a WBBL contract. “The nerves sort of climbed from there to the first ball,” she said.

Pressure, and expectation, it appears are things Litchfield is able to take in her stride. On Friday, against a star-studded Sydney Sixers side, and walking in with her team 3 for 25, key internationals Rachel Priest and Rachael Haynes dismissed, she showed her range of strokes with a flick over midwicket followed by a deft scoop over fine leg. “I guess I go where there’s no fielders. It was on, so I went for it,” was her matter-of-fact response.

It was an attempt at a repeat that saw her go lbw, but even the dismissal was significant as the wicket-taker was fellow 16-year-old Hayley Silver-Holmes.

“To see such class from a 16-year-old is really impressive,” Alyssa Healy said. “That’s what’s so great about this competition, these young girls are getting opportunities.”

Litchfield has already had plenty of representative honours, selected for a Governer’s General XI, touring with Australia U-19s, and a few weeks ago playing for a Cricket Australia XI against the Sri Lankans. Her WBBL debut, on a landmark night for the competition, was another milestone.

“I aspired to be in the Big Bash and now I’m playing in it, so it’s a great experienced and I’m just happy to be here,” she said. “It was crazy and felt like a dream. It was a great experience, having [Alex Blackwell] out there made me a bit more calm which was nice. It’s a very good spot to watch, at the other end, Alex go at it.”

It is some age gap between the two batters in the middle ! Well played Phoebe on debut. Another cracking kid from country nsw. It was an enjoyable 50+ run partnership. @SixersWBBL too good for us tonight. We get a chance to turn things around on Sunday 2pm v The Heat #WBBL05 https://t.co/NAnon0m7GA

There is both excitement and a degree of caution within the Thunder camp – not wanting to overwhelm Litchfield early in her career – but also an acknowledgement that her maturity stands her in good stead.

There are more shots in the locker, too, with Litchfield having a 360-degree game with parts of hockey, the other sport she plays at representative level, playing a part.

“I have to play hockey right-handed so it took me a while to get good at that. I didn’t do a reverse sweep today, but the reverse comes out and that’s sort of a hockey shot,” she said.

She is part of the Australia Under-16 hockey side and at the moment is pleased to be able to split her focus between two sports. She knows a decision looms at some point in the future but it is not something that has been discussed yet and the Thunder coach Trevor Griffin sees it as strength that Litchfield has another focus in her life to retain a balance.

“I like having the off-season to get my head off cricket, it’s a nice fitness booster and I think if played cricket all year I’d probably get sick of it, so it’s nice to switch over,” Litchfield said. “Most likely [I will have to choose] because the season is getting bigger and bigger and there’s lots of competitions around the world, but I’m not thinking about that soon. If cricket asks me to stop, I’ll stop, but for now I’ll keep playing both.”