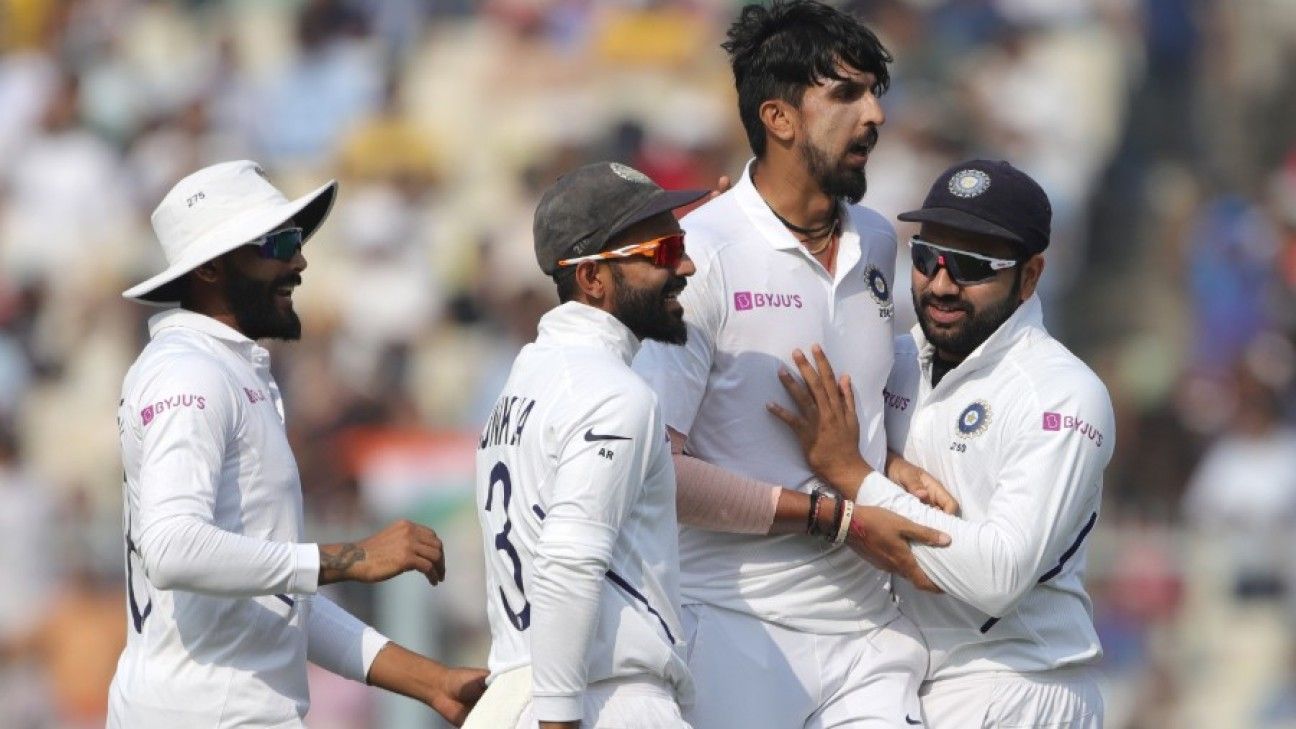 A renewed approach to life has helped Ishant Sharma grow as a bowler, he said after taking a five-wicket haul in India’s first day-night Test. It was his first five-for in India since his first home match in 2007 against Pakistan.

Ishant has more or less become a permanent member of this Indian team over the last two years, and is central to the pace attack that has progressively improved as India firmly established themselves in the No. 1 spot in Tests. This permanence and the recent bursts of improvement have not been enough to make Ishant consistently challenge for a limited-overs spot. But 12 years and 96 Tests later, he is not wasting time feeling sorry for himself.

“In some sense [it hurts], yes. But I’m at a stage of my life where I’ve stopped worrying about these kind of things. I’m 31 now, I can’t keep worrying now about which format my name has been picked for.” Ishant said at the press conference in Kolkata. “Whether I play for India, whether I play Ranji Trophy – I just want to be playing at this point. It’s a simple thing. If you desire to keep playing, you’ll do well. Cricket’s given us everything. If we keep cribbing about small things like these, we will never improve.”

Just before Sri Lanka’s tour of India almost exactly two years ago, Ishant had taken 212 wickets at 36.93 in 77 Tests. Since the start of that series, he has taken 76 wickets in 19 games. His career average has gone up by a dramatic four runs per wicket and is presently at 32.94. That is precisely the average at which Zaheer Khan finished his career. If he plays in four more Tests, Ishant will be first frontline fast bowler since Kapil Dev to go past 100 Tests for India. These are all feats that were improbable some five years ago. What changed?

“I think I’m enjoying my cricket now,” Ishant said. “Earlier I used to put pressure on myself about performing – that I need to take wickets, that I’m only beating the batsman…a lot of things used to run on my mind. Now I don’t think too much about those things, just how to take wickets. Obviously I’m experienced so I can assess conditions and adjust my lengths quickly, that makes it easy.”

Ishant Sharma interview on The Cricket Monthly: ‘If I don’t take wickets even in one innings, I think my career for India is over’

Another feat Ishant achieved on Friday was that he bowled India’s first delivery in a day-night Test. Bowling with the pink ball, he said, was not the same.

“It was very different. In the start you must have seen that when we bowled a normal length, it wasn’t swinging that much. After that we realised what lengths we need to be hitting in order to get some more help. So the three of us [fast bowlers] communicated about hitting the right length,” Ishant said.

Regardless of that rustiness, India managed to be consistent enough to have Bangladesh six down by lunch. The fall of those wickets began with Ishant trapping Imrul Kayes lbw. And it came with a ball he only started developing during the second day in the previous Test.

“You must have seen that normally I used to swing it away from the left-hander,” Ishant said, talking of his new incoming delivery. “So I needed to add a variation. Your game only improves when you bring variety to it, and build confidence to bowl those in the match. So I was trying to bowl more of that in practice. In this match, the first wicket that I got – Imrul Kayes lbw – I got him with that ball. The two bowled wickets I got were also that ball. The ball lands and stays straight, it doesn’t go away from the batsman.”

On the flip side of this contest, Bangladesh have struggled to show any resistance, in any innings, against this Indian attack. While neither of the pitches have particularly difficult to bat on, Bangladesh’s top-order has crumbled in the face of relentless pressure. At the same time, their bowlers haven’t come as close to troubling India. But even as they face a grueling period, head coach Russell Domingo was optimistic, citing Ishant’s steep rise as a potential inspiration for his own bowlers.

“I don’t want to keep comparing the two sides but if you think of the number of Tests their pacers have played, and compare that with Ebadat’s fourth Test match, we have a very inexperienced bowling line-up.,” he said.

“Look at the way Ishant started, and the way his career is now. It takes a bit of time for these young fast bowlers to find the length and the discipline it takes to bowl to guys like Rohit, Virat or Pujara. It is a steep learning curve at the moment.”