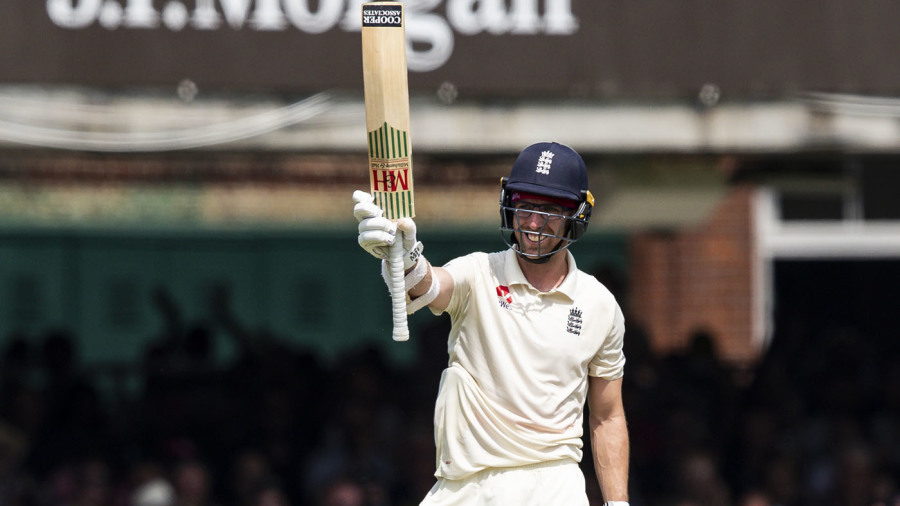 England found resistance from an unlikely source on the second morning of their Test against Ireland at Lord’s. Jack Leach, seizing the opportunity presented as nightwatchman on the first evening, posted a maiden Test fifty as England fought their way back in the match.

Leach, who batted at No. 11 in England’s first innings – he became just the second man, after Harry Butt, in Test history to bat at No. 11 and open on the same day – batted throughout the session to help England reach parity on the stroke of lunch. He is believed to be the first nightwatchman in history to make a Test half-century as an opening batsman.

With Jason Roy also riding his luck to reach a half-century on debut, England added an unbroken 96 for the second wicket – clawing their way back into the match and giving Ireland the prospect of a tough afternoon in unusually warm conditions.

To put Leach’s contribution in perspective, he had only twice made half-centuries at first-class level and had a career first-class batting average of 10.97. Bespectacled and with few pretensions as a batsman, he came into this match averaging 4.66 in the County Championship season having made just 42 runs in 12 innings – with many at his club, Somerset, fearing his confidence had been permanently damaged by a blow on the head while batting against Morne Morkel last year.

Furthermore, England openers managed just three half-centuries over the entire English winter – a period that encompassed six Tests – meaning that Leach now has the third-highest score by an England opener since the retirement of Alastair Cook.

Resuming with a deficit of 122, Leach was beaten like a snare drum in the opening overs of the day. He got off the mark with a thick edge off Tim Murtagh that flew between slips and gully and was grateful for four overthrows after his quick single was rewarded by a deflection off the stumps; not the first time a deflected overthrow has come to England’s aid on this ground in recent times.

But, as Leach settled, the ball softened and the attack tired in draining conditions – the temperature was soon in the mid-30s – he began to unveil some surprisingly elegant strokes. At one stage he hit five fours in nine balls – including three in four off Boyd Rankin – with some languid straight and cover drives especially eye-catching.

His fifty came with his eighth boundary, another thick edge, off 82 balls. His highest first-class score – 66 against Lancashire in 2018 – is now within sight.

He was given increasingly assured support by Roy. While there were some nervous moments early in his innings – one attempted flick through midwicket resulted in a thick edge that passed just out of reach of the slip cordon – he was merciless on anything loose and greeted the introduction of Andy McBrine’s offspin from the Pavilion End by skipping down the pitch and heaving his second delivery over midwicket for six. A short while later, a fierce sweep for four brought up England’s hundred.

Shortly before lunch, he completed the quickest half-century by an England debutant in Test history. Roy reached the milestone in 47 balls; Matt Prior took 55.

It was not an entirely positive morning for England. Rory Burns suffered his second failure of the game as he was caught behind reaching for one outside off stump. It was Burns’ sixth sub-30 score in successive Test innings and his ninth in 10. His Test batting average is now down to 22.28. With the Ashes looming, his continuing struggles will be a concern to the England management.