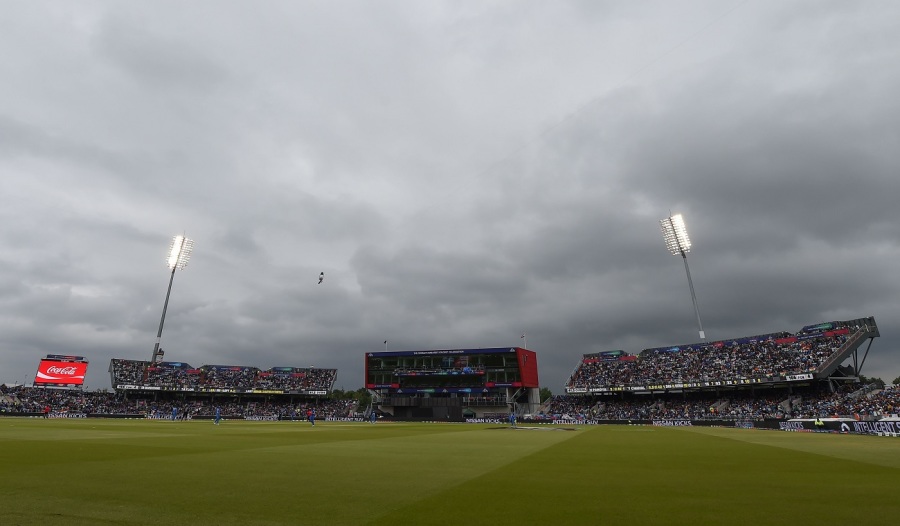 Rain pushed the Old Trafford semi-final between India and New Zealand into its reserve day. When the players went off the field at the start of the 47th over, New Zealand had struggled to 211 for 5 on a distinctly two-paced surface.

Under the tournament playing conditions, the match officials tried their best to complete the match on Tuesday, even if it meant a reduction in overs, but the rain didn’t let up. This means that the match will resume on Wednesday – weather permitting – as a full 50-overs-a-side contest.

The five most recent matches at Old Trafford leading into this one had all been won by the team batting first, and that’s what Kane Williamson decided to do upon winning the toss, though he said it had been “a toss-up with the overheads”, given the threat of rain and a revised target – which usually favours the chasing team.

India’s new-ball bowlers relished the overheads first up, with Bhuvneshwar Kumar finding swing straightaway and a cracked surface also affording him and Jasprit Bumrah seam movement. Their lengths were immaculate, and both began with maidens. When extra bounce forced Martin Guptill to fend Bumrah to Virat Kohli at second slip, New Zealand were 1 for 1 after 3.3 overs. It had been a near-perfect opening salvo from India, save a wasted review first ball when Bhuvneshwar struck Guptill on the front pad with a ball that ball-tracking suggested hadn’t straightened enough to hit leg stump.

New Zealand didn’t lose any more wickets in the first ten overs, but their score at the end of the first Powerplay – 27 – was the lowest of the World Cup. Bhuvneshwar and Bumrah gave nothing away, and frequently beat the bats of Henry Nicholls and Williamson, who for their part didn’t take any risks, mindful of the need to keep wickets in hand.

By the first drinks break, the second-wicket pair was beginning to gain a bit of momentum, with Nicholls sweeping Ravindra Jadeja for four in his first over, and Williamson pulling and steering Hardik Pandya for boundaries in successive overs. When Pandya hobbled off the field after the 16th over, looking in some discomfort with his groin, India may have begun to feel a little concerned. They had left out Kedar Jadhav once again, and only had five bowlers. With six overs of Pandya’s quota still left, would they need to turn to Virat Kohli‘s highly occasional medium-pace?

As it turned out, Pandya soon returned to the field to resume bowling his cutters and slower bouncers, and Jadeja delivered an important breakthrough.

Having been swept for that early boundary from left-arm over, he went round the wicket to the left-handed Nicholls. This meant Jadeja would largely be pitching within the stumps and straightening the ball, rendering the sweep a risky option. Forced into the defensive, Nicholls was bowled by one that turned sharply past his inside edge.

The amount of turn Jadeja was getting vindicated India’s decision to stick with him. They must have been tempted to pick both their wristspinners, but Jadeja’s value with the bat tilted the scales in his favour.

Rather than the left-arm wristspin of Kuldeep Yadav, India went with the legspin of Yuzvendra Chahal, and with the ball gripping, turning, and often stopping on the batsmen, Williamson and Ross Taylor had to bat with caution. From the start of the 19th over – in which Nicholls departed – to the end of the 27th, New Zealand only scored 20 runs. When Taylor swept Chahal to the backward square leg boundary in the 28th over, it was the first boundary in 81 balls.

In the 35th over, Williamson – who had by then brought up his fourth 50-plus score of the World Cup – made a visible effort to quicken the pace of scoring, lofting Jadeja over extra-cover for three and slog-sweeping him for four. But it remained difficult to go after the spinners, as was apparent when he played and missed at the last two balls of the over, attempting to make room to hit inside-out.

A similar shot in the next over brought about Williamson’s downfall, Chahal’s turn and bounce inducing him to slice to backward point. James Neesham fell five overs later, finding long-on with a leading edge off Pandya. New Zealand were still struggling to come to terms with the slowness of the pitch, and by the end of the 41st over their run rate was still below four an over.

The change of gears came in the 44th over, when Taylor brought up his half-century – off 73 balls – with a trademark shovel-sweep for six off Chahal. Two more boundaries – a whip against the turn from Taylor, and a slap through point from Colin de Grandhomme – gave New Zealand 18 for the over.

De Grandhomme edged Bhuvneshwar to the keeper in the next over, but Taylor was just beginning to look dangerous – he had scored 23 off his last 13 balls – when the rain arrived.

Various scenarios could have played out depending on when the rain stopped. India could have been set a revised target of anything between 148 in 20 overs and 237 in 46. An inspection looked imminent at one point, only for the rain to resume, and in the end – weather permitting, of course – we will get a full 50-overs-a-side contest. Not ideal, perhaps, for the spectators, but just right for the semi-final of a 50-overs World Cup.