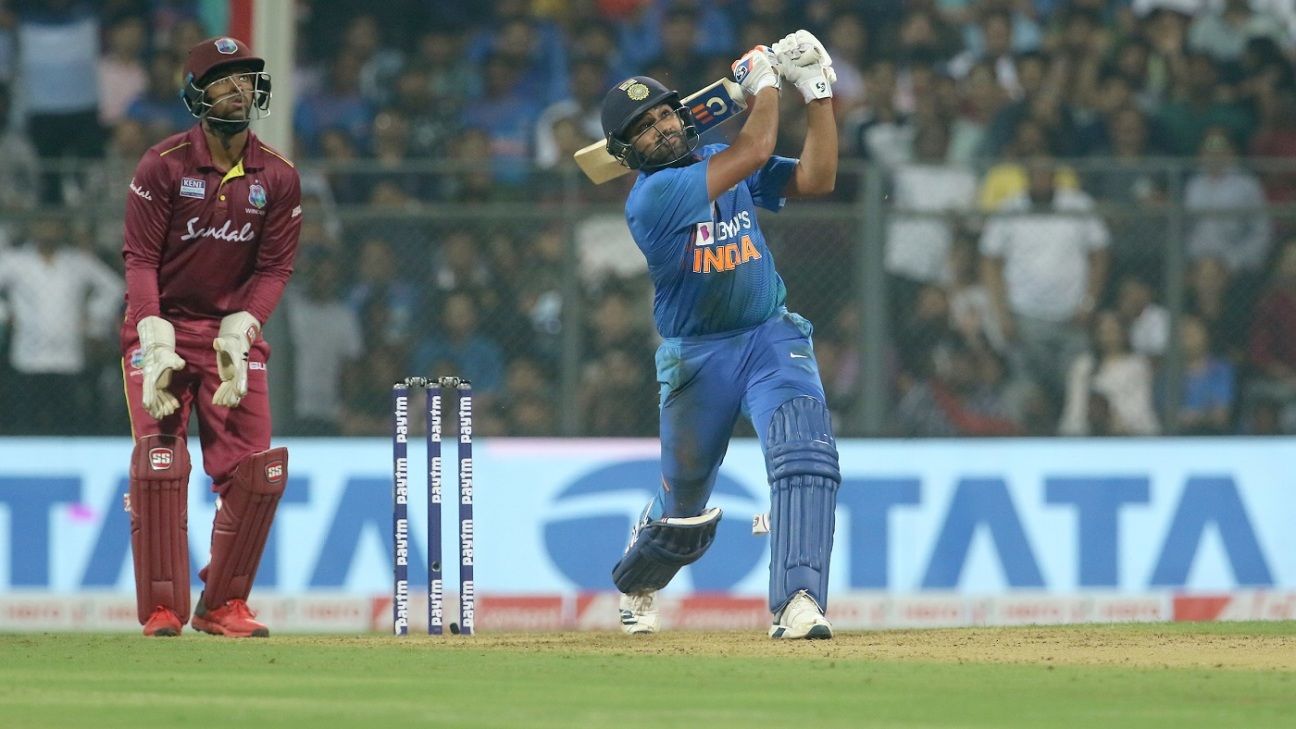 India haven’t gone hard at the opposition while batting first in T20Is of late, but they hung up caution and unleashed a no-holds-barred assault on West Indies in the series decider in Mumbai on Wednesday. More than three years after West Indies had overpowered India in the T20 World Cup semi-final at this very venue, India swapped their safety-first approach for all-out attack. And they attacked relentlessly to floor Kieron Pollard’s men.

On the eve of T20I series decider, Rohit Sharma, India’s limited-overs vice-captain, reckoned that the hosts might not have to do a West Indies to beat West Indies. However, on a flat Wankhede pitch and a quick outfield, India’s batsmen pulled out one big hit after another, West Indies-style, to rack up 240 for 3 in their 20 overs – their third-highest total in the shortest format.

In a similar scenario – a series decider – against South Africa in Bengaluru in October, Virat Kohli had challenged India to bat first and break out of their comfort zones. After India managed just 134 for 9 and watched South Africa mow it down with considerable ease, Kohli had said: “In the past, in certain games in T20 cricket, we have been 20-30 runs short batting first. That has cost us the game. So, the idea again as I said at the toss, was to come out of our comfort zone and then try to get that big score because we are batting till No. 9. But quickly we realised the pitch didn’t allow us to keep doing that.”

The bash-through-the-line Wankhede track and its short boundaries allowed India to keep landing the punches on West Indies after they were asked to bat first on Wednesday. They didn’t hold back at any point, with all of Rohit, Kohli and KL Rahul repeatedly executing the big hits to near-perfection.

The carnage began when Rohit opened up his stance and regularly threw his hands at the ball, taking more risks than he usually does at the start of his innings. Left-arm seamer Sheldon Cottrell found some inswing with the new ball, but Rohit didn’t care, laying down the marker with a hard-handed jab-punch through extra-cover.

In the second over of the game, Jason Holder swung the ball away from Rahul, but he didn’t care either. He cleared his front leg and his head fell over, but he still swiped at the ball and edged it past the keeper to the third-man boundary. Then Rahul hit five boundaries in six balls, including three on the trot off seamer Kesrick Williams, to vault India to 72 for no loss at the end of the powerplay. It never stopped.

“You don’t really feel much pressure when you have 20-25 extra runs on board and boundaries play a major part. In a span of three-four balls, you can maximise that phase for your team”

Rohit then lined-up left-arm fingerspinner Khary Pierre and clouted him for 6, 6, 4 to take India past 100 by the end of the eighth over. In the recent past, India have opted to sit back in such scenarios, but in the third T20I, they just didn’t take their foot off the gas.

Facing up to Holder, Rohit swung for the hills – so much that he nearly swung himself off his feet – and wound up nicking it past the wicketkeeper to the third-man fence. High-risk, high-reward.

After Rohit holed out for a 34-ball 71 off Williams, while attempting a pull, India bumped a power-hitter to No. 3 for the second successive game. Enter Rishabh Pant. This, after allrounder Shivam Dube had muscled 54 off 30 balls in the second T20I in Thiruvananthapuram.

Pollard tricked Pant with a slower cutter and removed him for a two-ball duck, but that didn’t stop India from continuing to go after West Indies’ bowlers. Kohli launched his fifth ball – from legspinner Hayden Walsh Jr. – over the wide long-on boundary and kept clearing his front leg to ping the leg-side boundaries.

Holder and Pollard tried out their variations, but Kohli still found enough power and manufactured pace for himself to send them in the arc between long-on and midwicket. Williams, though, had greater control over his lines and lengths, and even used the crease tactfully, to keep Kohli quiet briefly.

However, once Williams missed his length by the slightest of margins, Kohli cleared his front leg and shovel-whipped him into the stands beyond long-on. It was only fitting that he capped India’s innings with a six, his seventh and the 16th overall for the hosts on Wednesday evening.

In response, West Indies could hit only 12 sixes, and they ultimately lost the game by 67 runs and the series 2-1. In 2016 in that semi-final, India had mustered a mere four sixes in comparison to West Indies’ 11. How the tables have turned.

“There’s one thing talking about getting a big score, but when you do it on the field you remember how you did it,” Kohli told Star Sports at the post-match presentation. “I think two guys in the middle with clarity – Rahul and Rohit – the way they played… I think that’s the key for us.

“Batting first, we’ve been too tight and hesitant in terms of should we go for it or not. But this pitch allowed us to play freely. It’s a good lesson for us and now we need to remember that. You don’t really feel much pressure when you have 20-25 extra runs on board and boundaries play a major part. In a span of three-four balls, you can maximise that phase for your team.”

It might not be as easy to find the boundary consistently on the larger grounds in Australia next year, but India shedding their conservative style of play and being more flexible could well be their biggest takeaway from this series against the reigning world champions in the shortest format.