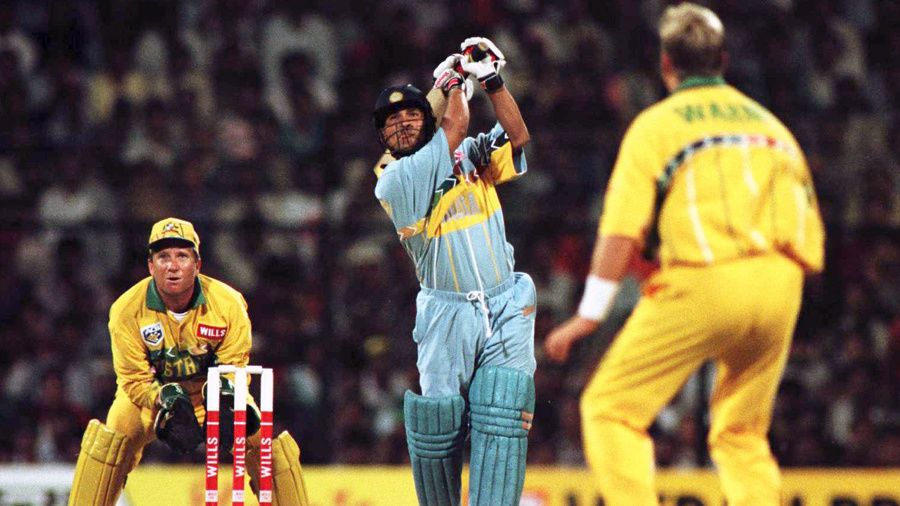 Title sponsors have a huge recall value when fans revisit memorable classics. Many Indians still refer to the 1983 World Cup as the Prudential World Cup. The 1987 edition, which India hosted for the first time, is fondly remembered as the Reliance World Cup. The 1985 World Series, made famous by Ravi Shastri and his Audi, is often referred to as the Benson & Hedges World Series. Many years from now, this India v Australia clash will be remembered as that Titan Cup fixture in Bangalore.

The match had everything. Some fine new-ball bowling from local lads Javagal Srinath and Venkatesh Prasad, electric fielding from Ajay Jadeja, a slow-paced but a well-constructed century from Mark Taylor that helped Australia post 215 and a fiery spell from a wiry Glenn McGrath, backed by relentless support from Jason Gillespie, that triggered a top-order wobble. Then there was a collision involving Jadeja and McGrath and, of course, Sachin Tendulkar being at the front and centre of India’s chase.

That wasn’t it. There was debatable umpiring and crowd trouble, too, when Mohammad Azharuddin fell to what he felt was a shocking lbw decision, when in reality, he had only himself to blame. India were only three down by then, but the signs were ominous. Memories of Eden Gardens from a few months ago came rushing back. But sanity prevailed and play resumed after a 20-minute delay. The break didn’t change India’s fortunes drastically as they lost Sourav Ganguly almost immediately to a brain freeze from Tendulkar. The Indian captain froze halfway through a second that he wanted, by which time Ganguly had reached a point of no return. The alarm bells were ringing and India’s chances hinged on Tendulkar, like it so often does these days.

He batted for a better part of the chase, shelving his natural game in the middle overs for hard-run singles, apart from sweeping and picking left-arm wristspinner Brad Hogg for crucial boundaries to ensure the asking rate never got out of hand. But his dismissal which quickly followed Nayan Mongia’s and Sunil Joshi’s left India at 164 for 8 in pursuit of 216.

Enter local boys Anil Kumble and Srinath, with their mums cheering and screaming for every run they scored, every ball they defended and every boundary they hit. The ninth-wicket pair held their nerve, combated the McGrath-Gillespie threat and eventually scripted a great escape. India needed 42 when they joined hands. The stands were starting to thin, but those who stayed back got their monies worth.

Kumble is a nudger at the best of times, Srinath a little more eccentric and enterprising. He fancies a good-old slog and when he connects, they sail. It’s this mix of ice and fire that had 40,000 faithfuls biting their fingernails off in the face of an asking rate that had spiralled to over a run-a-ball. As the equation narrowed, the crowd stated to heave. Australia felt the pressure and when it was down to single digits, not even the nerves of the occasion could fray the two local boys, who ensured India ended up winners.

As many as six Karnataka players were part of India’s XI in this game. At that World Cup quarter-final game, Venkatesh Prasad was the hero. Here, it was his close friends who became overnight sensations. Joshi strangled Australia in the middle overs with some tight bowling, but the two batsmen – Sujith Somasunder and Rahul Dravid had outings to forget.

If facing Brian McMillan and Allan Donald may have been intimidating enough in Hyderabad, Somasunder ran into McGrath here, looking all over the place against the short ball. He was roughed up so much that a sucker ball – an inswinging yorker – had his stumps in a mess. However, these are blips India would want to look at later, for this win came at the right time following a string of ODI failures post their infamous World Cup semi-final, in Singapore, Sharjah, Sri Lanka and Toronto.

For Australia, Taylor’s industrious century was some consolation. It was his slow but steady partnership with Steve Waugh that lifted Australia after the innings meandered around the three-run-per-over mark for much of the first half. After Waugh’s dismissal, Michael Bevan added some much needed-urgency, but it felt as if Australia fell much shorter than they would’ve liked to finish with.

But, their bowling attack made their total of 215 look bigger. It so happened that they ran into an inspired lower order and Tendulkar, yet again. In Mumbai, at the World Cup, they got away. In Bangalore, they couldn’t pull off a coup.