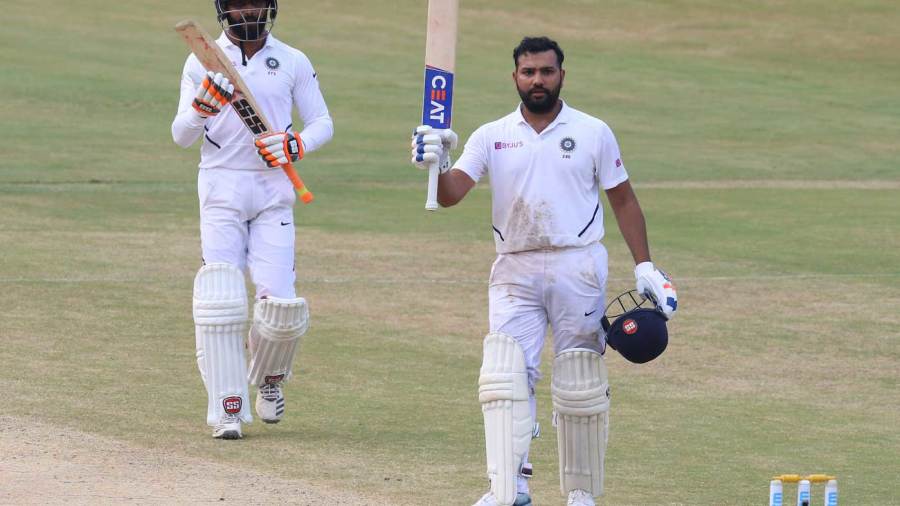 In his second innings as opener, Rohit Sharma scored a century even better than in the first to set up a declaration for India with a day and 13 possible overs to go. In the nine overs before bad light brought a premature end to play on the fourth day, Ravindra Jadeja removed the first-innings centurion Dean Elgar.

Rohit’s was another six-filled innings but on a worn-out surface with the ball beginning to rag. A strike rate of 85.23 on day four was truly exceptional, and just what India needed after South Africa had kept them in the field for far longer than they would have liked to.

It is hard to believe, but for a session and a third, it all seemed to be going to plan for South Africa. Starting the day 117 behind, they had a sticky last-wicket stand of 35 and also kept India’s scoring in check. It took India two hours and 27 minutes of play to get back to a lead of 117. Philander had bowled a spell of 4-3-2-0, Maharaj has taken a wicket, and Rabada kept asking questions. While Rohit had managed to hit three sixes, rotating the strike had been difficult and the scoring rate hovered around two.

It was an interesting time in India’s innings. It might seem ridiculous after the later onslaught, but there was a brief period when India needed to make sure they didn’t collapse and allowed South Africa hopes of winning the Test. Pujara was cautious to begin with; when he began to look for runs, he found that the pitch was not easy right now to manipulate gaps. He kept skipping down the pitch, but he kept finding fielders on the leg side. An outside edge off Piedt went down, but so big was the deflection that to call it a chance would be cruel on Quinton de Kock.

Two overs before a drinks break, gloves came out for Pujara. Rohit berated him for lack of urgency in running. You could feel there was pressure building on Pujara. He still kept finding the fielders. You wondered if he would finally try to loft the ball. He skipped down to Piedt again, was beaten in the air – a rare occurrence – and then managed to get a thin inside edge to beat de Kock and get four runs. After that, as if magically, the ball began to find gaps.

Pujara was 8 off 62 before this, and India 64 for 1 in the 28th over. The flood gates opened so dramatically that he had hit four fours in seven balls. All along the ground. In the extended middle session, he went past Rohit’s score and also his boundary count. The only time he hit in the air, though, was when spinners bowled long hops, and he put them both several rows back in the stands.

Rohit’s six-hitting at the other end was something else. Except for one, his 10th of the match that landed in long-on’s hands but Senuram Muthusamy’s foot just flicked the rope before he did the release-and-step-out trick, all of Rohit’s sixes were regal languid hits. It was contagious with Jadeja hitting three in 32 balls, and Virat Kohli and Ajinkya Rahane landing one each of their own. India hit 27 sixes in the match, five more than any team has ever hit in a Test; the overall tally of 34 sin the match was one short of the record.

Pujara once again got a beauty from Philander to be dismissed lbw by a straight ball that seamed away, but by then he and Rohit had put India on the path to domination again. The torment, though, was to continue. India promoted Jadeja possibly to get a right-left combination going, but he didn’t have to worry about picking up the scoring rare because Rohit gave already high rate a boost by hitting Piedt for three consecutive sixes.

By the time Rohit missed once, South Africa had been beaten into submission and they chased after him to congratulate on his superb effort: more runs and more centuries in a match than anyone opening for the first time.

After some more fun – it was arguable India enjoyed themselves for a bit too long keeping in mind there could be some rain on the final day – Kohli asked South Africa to enter the cauldron again. India were not allowed to use fast bowlers because of the light, but it wasn’t a blow to them. Spinners would have done the bulk of the bowling anyway. Before stumps, Jadeja trapped Elgar in front, but before that he had to convince his captain to go for a review.

Having worked hard with the bat on day three, having batted out 131.2 overs, South Africa’s batsmen will be filthy with their spinners for having put them in such a situation yet again.