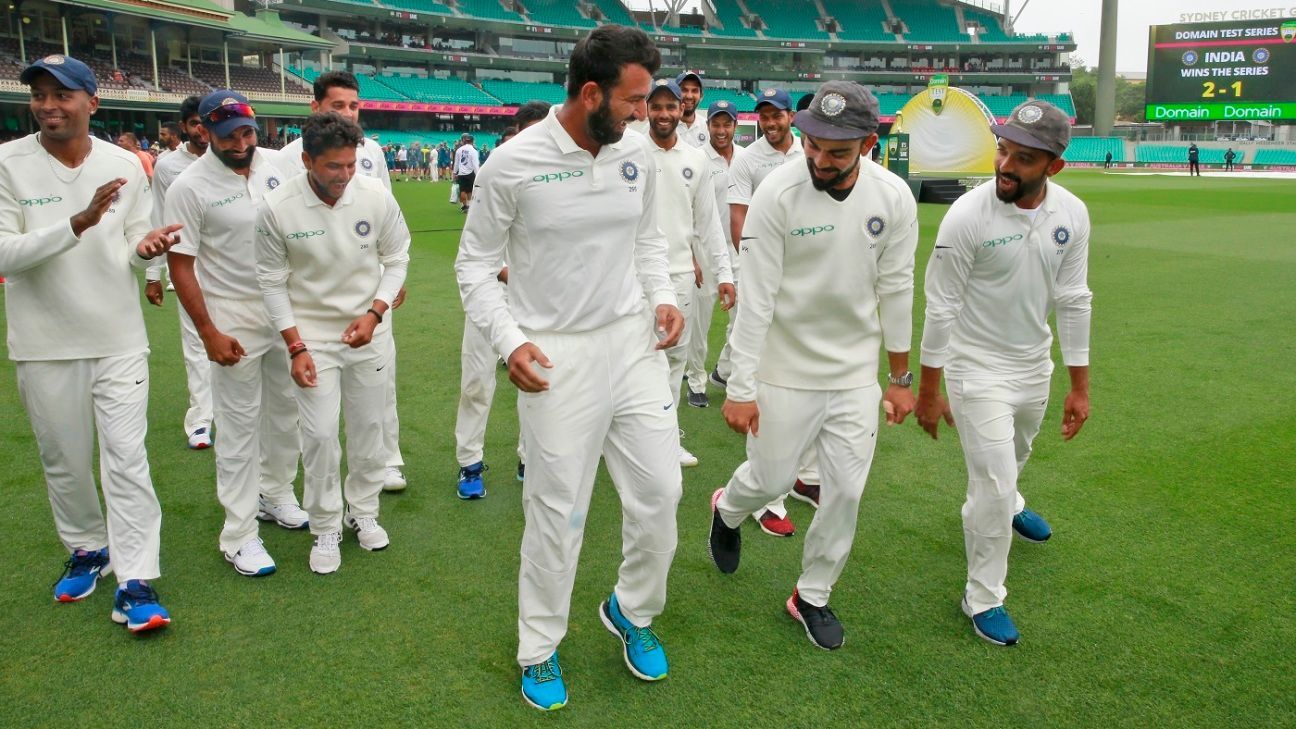 India’s celebratory dance moments after the Sydney Test was called off, thus sealing India’s first series win in Australia, may have just been a tribute to Cheteshwar Pujara, the highest run-getter and Man of the Series. Rishabh Pant, the wicketkeeper, started it, a bit of spot-jogging with the top half of the body falling forward.

“That was the Pujara dance because when he walks he doesn’t move his hands,” Virat Kohli said. “It was an extension of his walk.”

Of course, Pujara, so assured with his footwork in the middle, displayed two left feet when implored to do the Pujara dance by his team-mates. “You’ll have to ask Rishabh that,” Kohli said about the dance. “He came up with and we just went along. It just felt good, it was very easy but Pujara couldn’t even do that… he is so simple.”

India’s coach Ravi Shastri joined in the fun, saying they wanted Pujara to shake a leg but perhaps he would have been more comfortable in his pads. “Pujara was exceptional in this series,” Shastri said. “He can bat and bat and bat. He made one mistake, that was at the presentation. He should have padded up and gone up and they would have given him the trophy without even mentioning his name once they saw you padded up.”

Dropped four times by the Kohli-Shastri combine, Pujara has finally earned unquestioned confidence from the leaders of the side with three centuries to help win the series for India. This has been a long journey from being clueless about why he was being dropped again and again. Now Kohli was full of praise for the best batsman of this series.

“A special mention to Pujara,” Kohli said at the trophy presentation. “He has been outstanding this series, after the kind of series he had last time when he came here. He’s one guy who was willing to accept things, take it in his stride, work on his game. He’s one of the nicest guys around. I’m happy for him.”

The contribution of bowlers, too, was immense. “I have one word to say and that is, I am proud,” Kohli said of the bowling unit. “I feel great standing in the slip cordon watching these guys. I didn’t have to tell Bumrah yesterday to bowl at 149 clicks with the old ball to a No. 11. It was his decision. You can see that hunger, you can see that passion. And we would put everything on the line to win for the team. That’s why those numbers come on the board. If you just want to put numbers on the board then you won’t even get the numbers or the wins. You strive for team goals, team excellence and help the team in any way possible and then those special things happen.

“You don’t need to tell the guys to run in and bowl with full intensity or full effort. They take ownership of their skills and you can see the way they bowl, they set their own fields. They are dictating terms now and this is the most amazing thing you can ask for from your bowlers, especially fast bowlers. When they are happy and firing you always feel like you can win anywhere in the world and you can beat any side in the world anywhere. In the last 12 months I would rate their contribution far above the contribution of any of the batsmen. Hats off to their effort.”