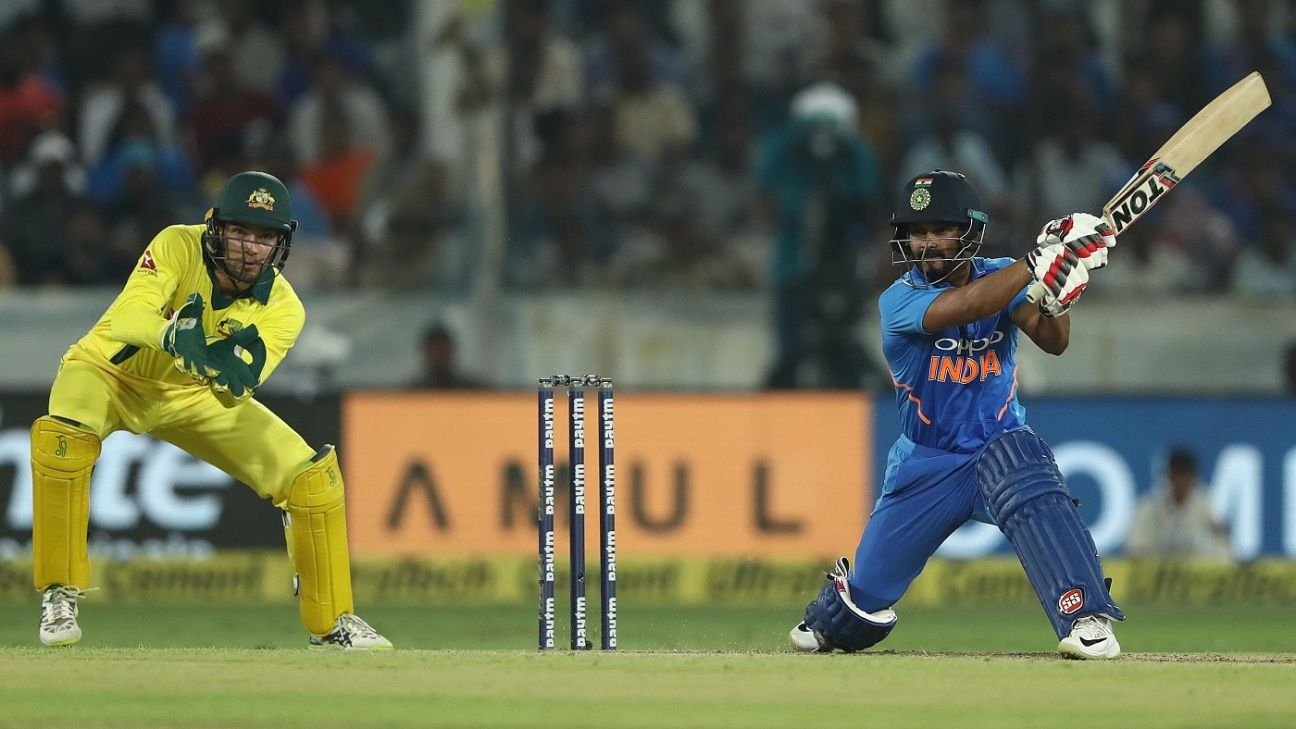 Virat Kohli felt India being reduced to 99 for 4 against Australia was “good for the team” as it allowed their lower-middle order to see off the game. Kedar Jadhav and MS Dhoni put together an unbroken 141-run stand to secure victory by six wickets.

“It was a difficult sort of a game,” Kohli said. “We did a good job with the ball. The wicket didn’t offer as much as it did under the lights, which was surprising. You have experience with MS and flair with Kedar who is also experienced now. That partnership was outstanding and it was more or less a complete performance. That set the platform.

“At 99 for 3 (India were four down), I was speaking to Ravi [Shastri] bhai, and I said this is good. These guys have to do it and they have to get us across the line. The way Kedar and MS took responsibility, it was great to see.”

Kohli was equally delighted with Ravindra Jadeja‘s frugal returns with the ball. While the left-arm spinner didn’t make any breakthroughs, his relentless pressure with accurate wicket-to-wicket bowling tied Australia’s middle order down.

“Ten overs for less than 35 was brilliant on this pitch,” Kohli said. “He set his fields, it was great to see. Even with the bat, he was all geared up that ‘I’m going to finish the game, I just want an opportunity.’ He looks in a great shape and that’s good for the team.”

Kohli was particularly effusive in his praise for Mohammed Shami, who he felt was leaner than ever before. Without saying it in as many words, India’s captain hinted at Shami’s selection for the World Cup if fit and firing like the way he has since returning to the ODI set up last year.

Shami picked up the wickets of the set Ashton Turner and Glenn Maxwell off consecutive overs to delay Australia’s slog, which could have cost them the 20 or 25 runs which Aaron Finch felt made the difference in the game.

“The way Shami has come back into the white-ball set-up after his Test performances has been brilliant,” Kohli said. “I have never seen him so lean before. He has lost five-six kilos. He’s running in and bowling so well. The lines and length he’s bowling; got Maxi on 40-odd out with a beautiful ball. He has wicket-taking ability and he’s hungry for wickets.

“Heading into the World Cup, it’s a great sign for team India. If he can stay hungry like this and look for wickets and he has the ability to back it up with (Jasprit) Bumrah and Kuldeep (Yadav), it’s going be great to stand in the field and watch.”

Shami, 29, credited the hard work during the time away from the ODI set up for his rejuvenated return.

“This year has been one where I have worked really hard on my fitness,” he told Star Sports. “We (team) enjoy our training and you get to the see the results on the field. When I returned from injuries, I weighed 93kg, and then I realised I needed to lose weight. I thank everyone who pushed me, and I have maintained my weight since then.

“I just try to give my best for the team, and I keep taking feedback from the experienced players. I have focused more on my line and length in the last 18 months, and that’s worked for me really well.”