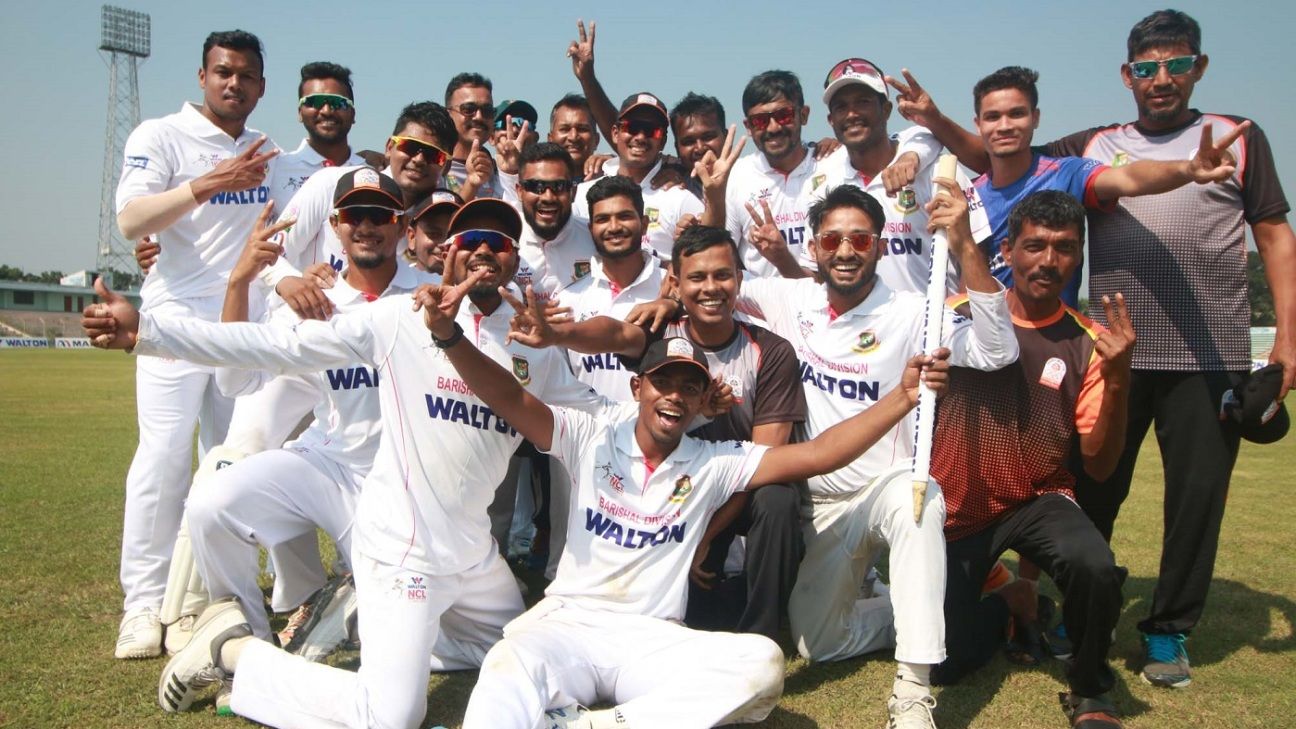 Defending champions Rajshahi Division drew with Dhaka Division – both sides finishing with 3.5 points each – in the opening round of the 2019-20 National Cricket League. All four matches in Fatullah, Khulna, Rajshahi and Dhaka were interrupted by rain, although it didn’t deter Barisal Division, who crushed Sylhet Division by an innings and 13 runs, from earning their first win in four years.

Imrul Kayes struck his second double-century during Khulna Division’s drawn game against Rangpur Division at home. Imrul was unbeaten on 202 off 319 balls, having spent more than six-and-a-half hours at the crease. He struck 19 fours and six sixes, as he ensured a 450-plus total for his side.

Dhaka Division’s Taibur Rahman made two scores of 88, once not out, against Rajshahi. Taibur found little support in the first innings, but in the second innings, he added 95 runs for the fourth wicket with Raqibul Hasan who scored 65.

Captain Jahurul Islam starred with the bat for Rajshahi, scoring 64 in the first innings, but it was his unbeaten 40 in more than four-and-a half hours at the crease that proved more valuable for his side. It ensured they didn’t suffer a collapse on the final day as they settled for a draw against Dhaka. Jahurul also lasted more than five hours for his 64 in the first innings.

Elsewhere, there were fifties for Barisal’s Shahriar Nafees and captain Fazle Mahmud, as well as Tasamul Haque who made twin fifties for Chittagong Division. Pinak Ghosh and Masum Khan also reached half-centuries, and so did Dhaka Metropolis’ Shamsur Rahman, Mahmudullah, Zabid Hossain and No. 10 Shahidul Islam.

Kamrul Islam‘s 6 for 24 decimated Sylhet as they were bowled out for just 86 in the first innings. This was Kamrul’s second five-wicket haul in first-class cricket, and the first in seven years. Another pace bowler, Sumon Khan, took 5 for 50 for Dhaka against Rajshahi. Taijul Islam finished with figures of 9 for 196 in the match, including a five-for in the second innings.

Dhaka Metro’s Arafat Sunny took 6 for 87 against Chittagong, while debutant legspinner Minhajul Abedin Afridi finished with 3 for 103 in 30 overs for Chittagong.

The roaring start from Barisal – after they crushed Sylhet inside two-and-a-half days – will offer real encouragement for supporters of first-class cricket in Bangladesh. The match was shortened to three days after rain washed out the entire first day in Rajshahi, but Kamrul’s six-wicket haul skittled Sylhet in 43.1 overs, before left-arm spinners Tanvir Islam and Monir Hossain shared seven wickets in the second innings to bowl them out for 132 runs.

Barisal also batted smartly, as they declared on 231 for 8 in 58.3 overs, in a bid to push for the result on the fourth day.

Khulna have taken an early lead with 4.01 points in Tier 1 but it is Barisal’s 9.5 points against Sylhet that puts them in pole position in Tier 2.

With the India tour coming up next month and a Bangladesh Test side devoid of a confidence, the selectors will be relieved to see Jahurul’s game clicking. The batsman remained at the crease for more than 10 hours in the season’s first game. Afridi’s first-class debut should also be encouraging.