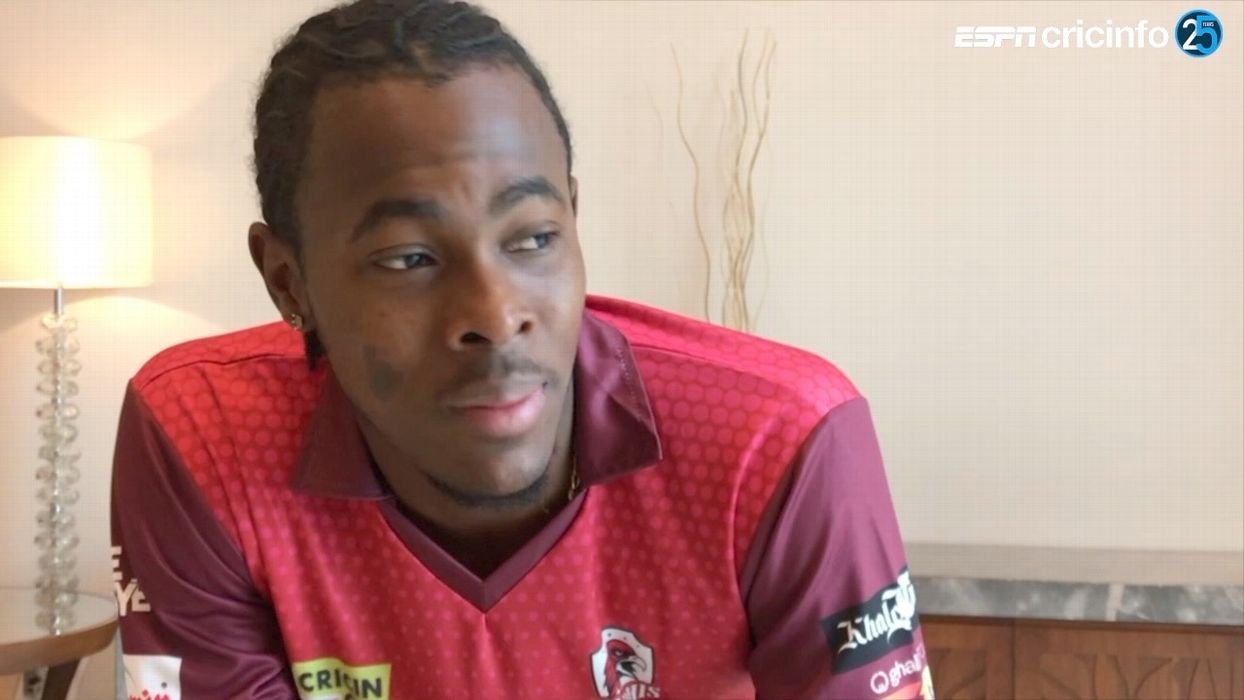 ‘It’ll be hard to squeeze into this England team!’ – Archer

Jofra Archer has hinted that he may consider pulling out of this winter’s stint with Hobart Hurricanes in the BBL, in the wake of the ECB rule-change that has raised the possibility of him making England’s squad for next year’s 2019 World Cup.

Speaking to ESPNcricinfo in the UAE, where he has been taking part in the T10 League, Archer insisted he was taking nothing for granted about his potential fast-tracking into the England set-up, but added that he needs to take time to assess his new priorities.

“I’m a bit excited, however that doesn’t guarantee I’ll be selected this year or for anything upcoming as yet,” said Archer. “If it happens, it happens, but I don’t want to think too far down the line. I’ve still got lots of cricket to play even before then so it makes no sense dwelling on that.”

Archer, who was born in Barbados and began his England qualification in 2015, had not expected to be available for international selection until 2022 at the earliest. All that has now changed, with the ECB reducing their residency period from seven years to three, even though the requirement to spend 210 days a year in the UK still has the potential to undermine his World Cup prospects.

The ECB’s new rules kick in from January 1, 2019, in time for England’s tour of the Caribbean in the new year. However, Archer’s retention by Hobart Hurricanes – the team with which he burst onto the world stage in last year’s BBL – means that he is unlikely to have completed his 210-day quota until mid-March. With his stint with Rajasthan Royals in the IPL also coming up in the spring, he could be short of opportunities to bed into the England set-up before the provisional World Cup squad is submitted on April 23.

“It is [exciting to be available for World Cup selection] but on the other side, because I’ve done so well in the Big Bash and the IPL which are coming up, if I’m doing well at them it’s something to argue about coming into the World Cup. As long as I look after my performances they should look after me with selection.”

Nevertheless, in a Twitter post soon after the ECB announcement, Archer admitted that he “would love to debut in front of my family,” a reference to the England tour of the West Indies that gets underway in Barbados in January. The only way for him to feature in that squad would be to pull out of his Hobart deal, and spend the winter at home in the UK to complete his 210 days.

“I’m not too sure [about skipping the Big Bash],” he said. “I haven’t been to Australia as of yet. I don’t know how the CEO would react. I haven’t asked yet. Obviously everything just happened only two days ago, so there’s still some time to do some thinking and to really see what takes priority.”

England’s one-day captain Eoin Morgan – who had previously played down Archer’s hopes of featuring in the World Cup – is also taking part in the T10 League, but despite staying in the same hotel, Archer said that the two have not yet spoken about his situation.

“I think [Morgan]’s the captain, I don’t think he’s the one who picks the team,” he said. “It doesn’t make any sense chasing it, as it’s only been two days. There’s still lots of time before the air changes. I’m still not fully qualified as yet, I still have to do my days. If it happens, it happens but I probably won’t try to overthink it too much.

“[England] are the No.1 team in the world and even if I am in the squad and not the team I think it would be a great experience to be around all those players.

“I just try not to think about it too much. England are doing really well in the Tests and ODIs, they’re doing well in everything and I think it will be hard to squeeze my way into the team.”

Nevertheless, in Archer, England may have found the final cog in an already well-balanced bowling attack that is currently only lacking an out-and-out pace option.

He is also a more-than-capable batsman and has already has an idea of where he’d like to bat in England’s allrounder-laden line-ups.

“In the Tests I’d probably just like to bat just after Sam [Curran]. Either before or after Sam. Both of us are attacking and I think we could really do some damage if we do get together,” he said.

“In the ODIs maybe seven or eight as well. I’m not too sure how it will go but I think whenever I do get the chance to bat I can just show what I can do and hopefully with a lot of performances I could squeeze my way up the order a bit.”

England’s gain is West Indies’ loss when it comes to Archer, who moved to Sussex after becoming disillusioned with West Indies cricket when he was overlooked for the U19 Cricket World Cup in 2014.

And though the ECB’s announcement drew ire from Cricket West Indies chief executive Johnny Grave, who accused England of “poaching” one of the country’s players, Archer suggested that those comments have been made three years too late.

“I saw the [Grave] article yesterday. I don’t really have too much to say on it to be honest. I left three years ago so what he’s saying now he should have said probably three years ago,” Archer said.

“There weren’t any opportunities [with West Indies] which is why I left. I want to say ‘no hard feelings’ but my dream is to play international cricket and with the possibility of it happening soon I think I made the right decision within myself.”

And even if Archer falls short of breaking into the England fold, there is another big personal positive for him, it means he can spend more time with his family in Barbados.

“Being qualified means I can spend a bit more time at home. This is three to four years now that I’ve only spent two or three weeks at home the whole year. Sometimes it’s not enough not seeing your family for so long so there’s at least some good things out of qualifying this year,” he said.

Jofra Archer interview was courtesy of Cricingif, exclusive digital partners of Sindhis in the T10 League

Barny Read is a freelance journalist based in the UAE