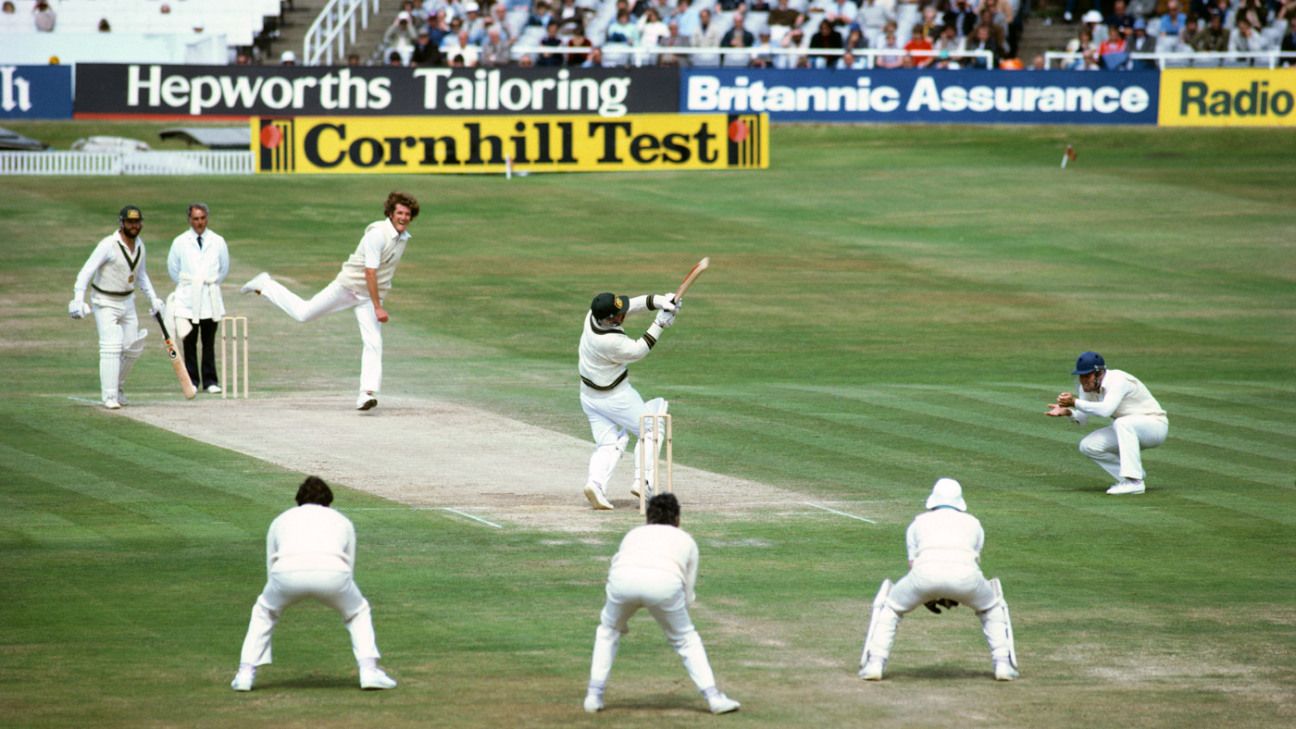 A bit like the relationship with one’s parents, or the pictures on the walls in your childhood home, some memories are set in stone before you’re even aware of who or what they represent.

Take the Headingley Test of 1981. How many people aged 40 or under can say for certain when they first witnessed footage of England’s most storied victory? For this onlooker, it was almost certainly on a rainy afternoon at school in the mid-1980s, and undoubtedly before I was even aware that cricket was the sport that would seize control of my formative years.

But by the time cricket’s rules and reputations had begun to take root in my conscience, the towering significance of Bob Willis, England’s mightiest of fast bowlers, was already one of the most fundamental prisms through which I and so many others understood and loved the game – thanks to countless replays, countless newspaper and magazine reports, and countless anecdotes that bounced off the walls that connect the myth to the legend.

Willis’s death today, aged 70, is a shattering and irreparable loss to the sport.

Willis was a grandee of English cricket in the most absolute sense. Iconic matchwinner, fast-bowling survivor, long-term leading England wicket-taker, Test captain and later manager, and ultimately a titan among pundits – best remembered in recent times for his pantomime savagery on Sky Sports’ Debate and Verdict shows, but a king-pin commentator in his 1990s heyday too. Try to imagine, for instance, the defining moment of the world-record 375 at Antigua in 1994 without “Brian Charles Lara of Trinidad and Tobago” ringing through your mind.

But he was too a gentle, knowledgeable, and deeply humorous soul – a man who signalled his independence of thought as a teenager by adding the middle name “Dylan” by deed poll in tribute to Bob of that parish – and a man whose love of the game was absolute, in spite of that distinctive nasal voice and a deadpan delivery that could be all too easy to misconstrue, not least for the players who followed in his wake in the Test team.

“But then, Brearley made his legendary switch to the Kirkstall Lane End, and Willis clicked into his ultimate Berserker mode – eyes glazed over, fury focussed on a distant point way, way beyond the stance of Australia’s rapidly scattered batsmen”

By his own admission, Nasser Hussain was one of those who initially took Willis’s bombast too literally, and upon scoring an ODI century against India at Lord’s in 2002, he infamously waved three fingers in the direction of the commentary box – one each for Ian Botham, Jonathan Agnew … and Willis, who had been particularly forthright about his place at No.3 in the batting order.

“He made you cross because he was so forthright with his opinions and I would go back to my room as a player wondering if he was going to crucify me on TV,” Hussain wrote in his own tribute in The Daily Mail “But it wasn’t his job to get to know players and he didn’t go out of the way to be nice about them yet when we did all meet him we quickly realised he was one of the good guys.”

And for the even younger generations of England player, who had grown up with Willis’s tyrannical commentary and saw him only as a fire-breathing beast, it wasn’t until a series of meetings were brokered by Andrew Strauss in 2015, during his early months as England’s director of cricket, that Willis’s generosity of spirit was able to cut through.

It just so happened that his dinner with England’s bowlers came on the eve of that summer’s Trent Bridge Test, and having sampled his choice of wine (Willis was quite the connoisseur – he even launched his own label in conjunction with Botham) Stuart Broad emerged with the opinion that Willis wasn’t “as scary as he had thought”.

Whether that had any impact on Broad’s subsequent 8 for 15, who knows, but by the end of that same Test victory, Joe Root (face hidden beneath an Albert Einstein mask) was able to send up Willis’s style in a memorable dressing-room interview on Sky Sports – one that led Willis, teeth baring but humour shining through, to retort that “when your little purple patch comes to an end… I’ll have you back in the dock!”

When it came to Willis’s live commentary, Hussain et al probably had a point – as a viewer, let alone as a player, and particularly through the night on another Ashes tour drubbing, the misery of his intonation had a tendency to overshadow whatever point he had been making, however valid. As a post-match pundit, however, with a licence to channel that long run of his playing days into his off-field excoriations, Willis was for a time unequalled.

Quite apart from making for compelling television, he rarely missed his mark – whether it was incompetent umpires, shambolic batting or administrative ennui in the high towers of the ECB. It was a fitting tribute to his second innings as a broadcaster that his catchphrase “well Charles…” began trending on Twitter shortly after news of his death was made public – though the man himself would doubtless have sighed wearily at that fact, and mock-grumbled that nobody seemed to have remembered the 325 Test wickets with which he’d truly made his name.

Well, most people with any affinity for Test cricket remember eight of those wickets, no question. For nothing compared to Headingley for the dent it left in the brains of a certain generation – and if it was Willis’s misfortune that the match will forever be synonymous with Botham’s “village-green slogging”, as Mike Brearley later dubbed it, then no-one who witnessed his role, in the flesh or otherwise, will be in any doubt that the truest quality of that contest came in its savage denouement.

As legend has it, Willis almost failed to make it to the contest at all. He had missed Warwickshire’s county match the previous week due to a bout of flu, and was dropped from the squad in favour of Mike Hendrick – only for that invitation to be intercepted in the post after Willis had explained he’d been saving his energy for the Test match, rather than merely lying low on his sickbed. In spite of his hefty haul of 899 first-class wickets in 308 matches, Willis could be a reluctant county performer – the legacy of his twin knee operations in 1975 and the daily agonies that his gangly frame had to go through to perform at the very highest level.

But even after his Headingley reprieve, Willis had seemed off-colour. He went wicketless in Australia’s first-innings as Australia’s grip on the Ashes tightened, then struggled for rhythm in an abortive opening spell in the second, as John Dyson and Trevor Chappell eased along to 56 for 1, chasing 130.

But then, Brearley made his legendary switch to the Kirkstall Lane End, and Willis clicked into his ultimate Berserker mode – eyes glazed over, fury focussed on a distant point way, way beyond the stance of Australia’s rapidly scattered batsmen. The lifter to Chappell, which snapped savagely into his upraised gloves before lobbing to Bob Taylor as the bewildered batsman scanned a full 180 degrees around his crease, was a declaration of war on a previously serene dressing room.

The moment of victory was every bit as iconic – Ray Bright’s middle stump demolished as Willis raised his arms in a robotic fist-pump and stormed for the pavilion before an ecstatic sea of fans could envelop him.

And no less iconic, if a more niche search item on YouTube, was his laconically drawled critique of the media during his post-match interview with the BBC. Turning on a mildly startled Peter West, Willis railed against the need to mine “small-minded quotes from players under pressure for their stories” – his point being, of course, “what on earth do you need to speak to me for?”

It certainly wasn’t an obvious means by which to audition for his second innings, but then Bob Willis was never one to take the conventional route.

But he was right, of course, as he so often was. What on earth could a Willis soundbite possibly have added to the technicolor masterpiece that he and Botham had completed only moments earlier? His instincts served him well, for this was one England victory in which the deeds would do all the talking a team could ever need. Tonight, you can be sure that myriad generations of England cricket fans will be toasting that glory one more time, and this time with extra feeling.