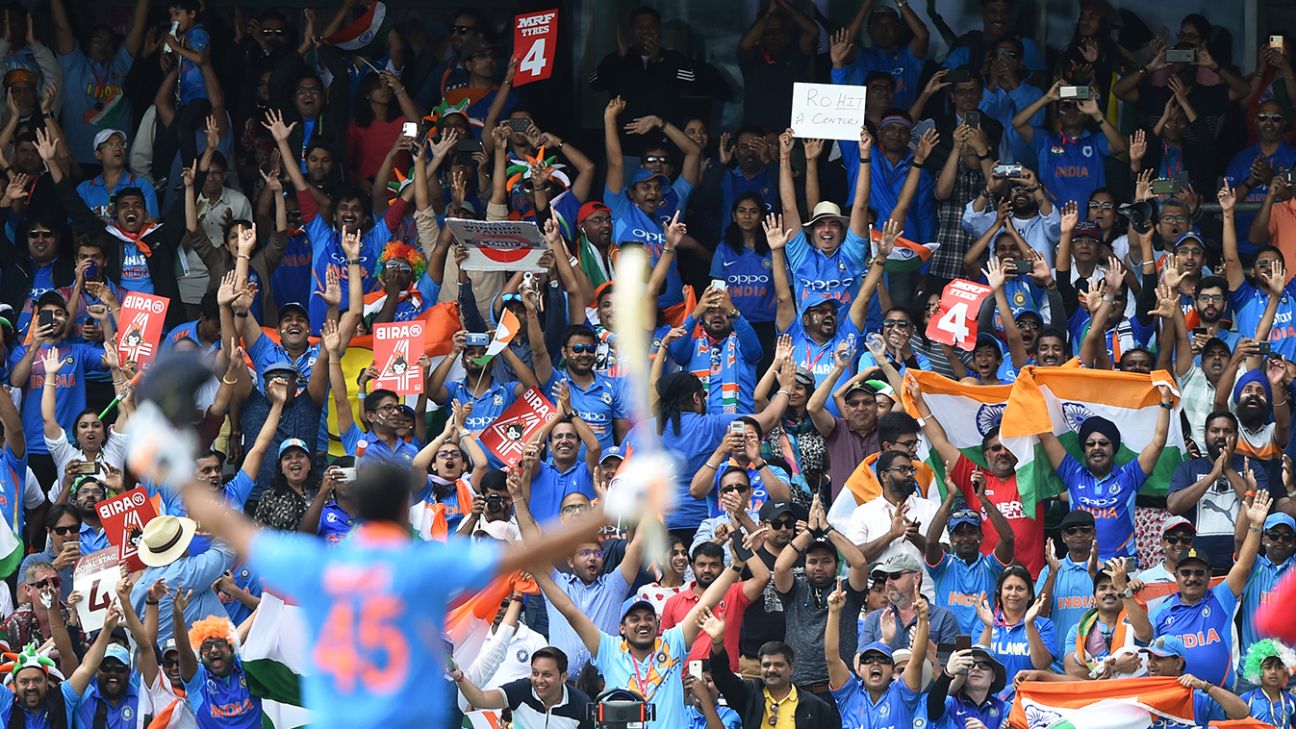 Cricket’s global governing body is headed towards a confrontation with the game’s biggest powerhouse after the ICC decided to include an extra tournament in the next rights cycle overlooking objections from the BCCI.

On Monday the ICC Board gave consent to include an extra global tournament in the next events rights cycle, which starts after the 2023 World Cup. As it stands, the ICC’s decision, made at its meeting in Dubai over the weekend, means that its next eight-year cycle running from 2023 to 2031 would have one ICC global (men’s and women’s) event every year: two 50-over World Cups, four T20 World Cups and two editions of this extra event, which is understood to be in the 50-overs format.

It could, according to some officials familiar with discussions at the ICC’s meetings, be a six-team 50-over tournament, along the lines of a smaller Champions Trophy.

However, the BCCI has already raised several concerns about the addition and Sourav Ganguly, the BCCI president-elect, made it clear in his first media interaction after filing his nomination that he wanted to revisit the matter of BCCI’s share of the ICC’s revenues. He said India should get what it “deserves”, considering nearly 70% of the global cricket revenues come from India.

The ICC board’s move came a day after the BCCI expressed reservations over signing off on a decision before its new administration was in place (scheduled on October 23), as well as over how another global event would eat into cricket’s bilateral calendar.

ESPNcricinfo has seen an e-mail sent on Sunday by Rahul Johri, the BCCI’s chief executive officer, to his ICC counterpart Manu Sawhney, in which he warns of the threat an extra global tournament poses to the bilateral calendar. Johri wrote that if the Future Tours Programme (FTP) for the next cycle (2023-31) was finalised without due deliberation, it would not only be “premature” but have “wide ranging repercussions” on bilateral cricket.

Incidentally, Amitabh Choudhary, the BCCI’s acting secretary was present at the ICC Board meeting, and echoed the sentiment expressed by Johri. However, the rest of the Board members said that the ICC decided to go ahead with the proposal to save time. It is understood that the move received widespread support.

“In examining a whole range of options, the Board felt a major Men’s and Women’s event each year will bring consistency to our calendar whilst complementing bilateral cricket, giving our sport a strong future foundation,” Shashank Manohar, the ICC chairman, said. “It will provide clear structure and context to enable the growth of the sport and greater engagement opportunities for all of our stakeholders.”

The ICC decision reinstates the global calendar as it was before the Big Three forced changes from 2015. Until that year, there had been an ICC event – or one scheduled – every single year since 1999, other than 2001. There was no ICC event in 2008, but Pakistan was scheduled to host the Champions Trophy that year, eventually held in South Africa the following year and in 2005 there was the ICC Super Series in Australia. In the eight-year cycle from 2015, however, two years have no ICC events: 2018 and 2022, and it is this gap that has been plugged.

But the BCCI is reluctant to play ball. “At the outset, we would like to inform you that BCCI cannot agree or confirm to the post-2023 ICC events calendar and the proposed additional ICC events, at this stage,” Johri wrote in his email to Sawhney. “The BCCI stands committed to bilateral cricket and would have continuing time requirement as in the current FTP. It is important for BCCI to fulfil all its bilateral commitments to fellow full members.

“The working group discussions are currently in progress and no recommendations have been made yet. Considering that, finalising the 2023 ICC events calendar will not only be premature but also mean that the correct procedure has not been followed. Increasing ICC events will have wide-ranging repercussions on bilateral cricket and therefore all aspects need to be discussed and analysed threadbare.”

It is understood that the matter first came up for discussions at the ICC’s working group meeting as well as at the chief executives’ committee (CEC) meetings held over the weekend in Dubai. The working group, which comprises two ICC board members (Cricket South Africa president Chris Nenzani and Cricket Australia chairman Earl Eddings) along with CEOs of BCCI (Johri), ECB (Tom Harrison) and Cricket West Indies (Johnny Grave), was formed last year to formulate strategy for the growth and development of cricket. On Saturday, Sawhney briefed the bigger CEC meeting.

Johri is believed to have argued that the ICC ought to prioritise bilateral cricket before pushing for more global tournaments in the calendar. Sawhney’s – and the ICC board’s – view is that having an additional 50-over tournament every four years will help all members draw extra revenue from the rights the ICC sells for the events.

The BCCI’s position is unsurprising given that its bilateral calendar still holds considerable value, something which is not the case for all members. Less financially secure boards would stand to benefit on the one hand from the increased revenues an extra ICC event will provide. On the other, they would have to balance that against the value their bilateral cricket and, increasingly, their own domestic T20 leagues bring – in calendars as packed with international and domestic T20 cricket, squeezing in one extra ICC event could hit a T20 league in some member country.

Johri did point out to Sawhney that the BCCI would not be able to sign on anything considering a new administration was on the verge of being formed with the upcoming BCCI elections. Johri wrote that the new BCCI set-up would need to be involved before any final decision was taken. “The BCCI elections are presently underway, and it will only be prudent for the new board members to deliberate and provide their inputs on this issue before any final decision is taken.”

The BCCI is believed to have suggested that the ICC should organise workshops to flesh out the details with all the boards. “It is imperative that the working group discussions are completed, and a report/ recommendation are submitted for the ICC CEC to consider,” Johri said in the e-mail.

With additional inputs from Osman Samiuddin and George Dobell