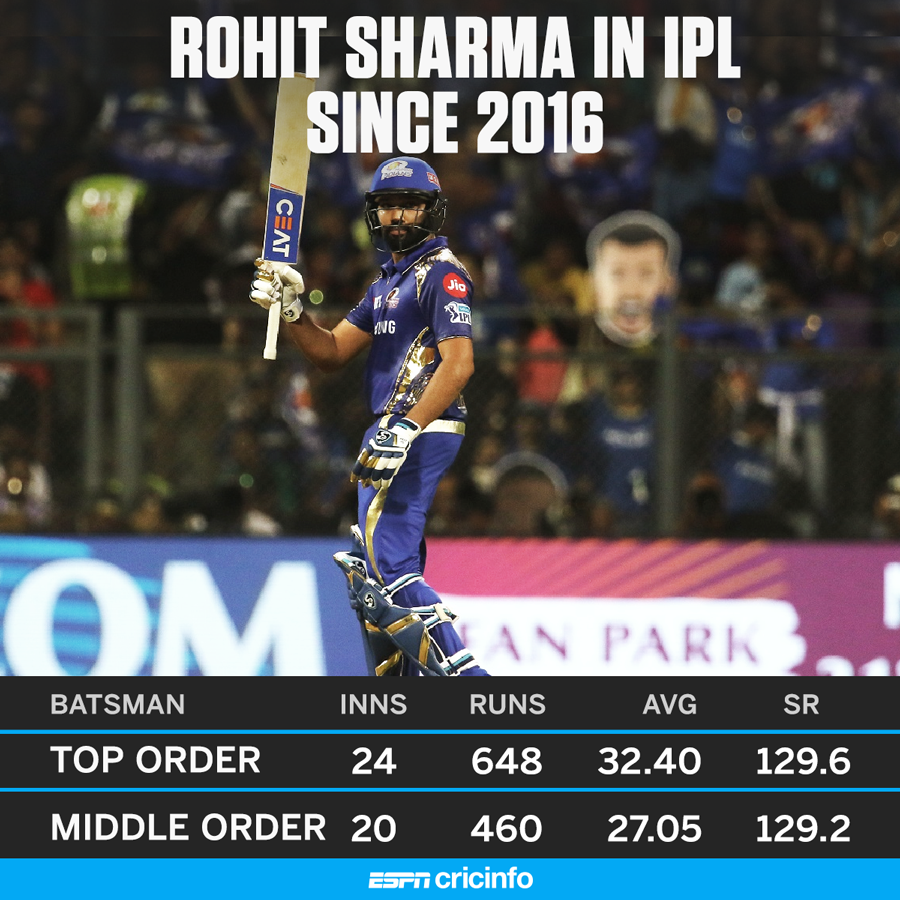 Mumbai Indians captain Rohit Sharma is going to open in all their games in the coming IPL. Speaking at the team’s pre-season media interaction, Rohit said that this move was partially because he opens for India and the World Cup follows immediately after the IPL.

“I have in the past batted in the middle order and I’ve opened also in a few games so wherever the team requires me to bat I have to bat to get the right balance,” Rohit said.

“But this year, I will open the batting for all the games, that is for sure. That (World Cup) is one of the factors but also keeping in mind that this is where I bat, that is my position when I play for India and that is where I have got a lot of success off late. The team does understand that, and as a team also the composition of the players we have right now, we’ve got some experience in the middle order so that allows me to go and bat at the top of the order. This season I’ll try and do that – open in every game possible.”

Rohit had batted mostly at Nos. 3, 4 and 5 last season for a combined 12 innings out of 14 and managed only 286 runs in all, his poorest tally in an IPL season. His best knock in IPL 2018 – 94 against Royal Challengers Bangalore – came when he batted at No. 4 but he had effectively opened that day because Mumbai were 0 for 2 after the first two balls of the match.

It is well established that Rohit is a relatively slow starter and that once he faces 30-odd balls, he shoots up his strike-rate with seemingly effortless strokes to script match-winning knocks.

Apart from Rohit’s poor form last season, Mumbai’s failure to make the playoffs was also a result of their inability to close out tight finishes, as six of their eight losses came in the last over. One reason was their top names not performing when it mattered, and this time they have also added the experienced names of Lasith Malinga, who returns from the support staff to the playing squad, and 37-year-old Yuvraj Singh, who has had unimpressive runs in the last few IPL seasons. Zaheer Khan, Mumbai’s director of cricket operations, said having Malinga back on the field could make a “huge difference” in “decision-making” and “pressure situations”.

“The kind of experience he (Malinga) brings to the table is immense not only with his bowling, but also in the game situation,” Zaheer said. “It’s a relief for Rohit also and for the other bowlers who trust the experience and the valuable advice he brings. Because as a coaching staff you can plan things but when the game is happening and you’re in a real-time situation and someone is pro-active, it makes a huge difference in terms of decision-making.

“What is going to be crucial for us this season is to have emphasis on decision-making which decides the outcomes of matches in the pressure scenarios.”

Malinga was Mumbai’s bowling mentor last season and then went on to make an impressive international return, particularly as Sri Lanka’s captain in ODIs and T20Is, which could help Rohit on the field.

About Yuvraj, his former India team-mate, Zaheer said: “Bringing in Yuvraj in the squad has been a boost because of the match-winning ability he has. In our discussions leading up to the auctions, we had identified that we need experienced batsmen who can control the game in the middle. Since Rohit has decided to open, we need that experience in the middle order and who’s better than someone like Yuvraj Singh.”

Kieron Pollard is another 35-plus player in the squad whose place Rohit and Zaheer were asked about especially because Pollard didn’t bowl at all in the IPL last year and managed only 133 runs in eight innings. His only fifty – off 23 balls against Kings XI Punjab – came a bit too late in the season in which he played nine of Mumbai’s 14 matches. Zaheer, however, insisted that Mumbai were keeping their “faith” in Pollard.

“He (Pollard) has been playing a very influential role as far as MI’s success is concerned,” Zaheer said. “Anyone who understands the game knows how difficult that position of batting is where people have been identifying and searching for players who can contribute with that kind of power at that scenario which can change the game. A 20-run difference is also huge in this format. So keeping that value and the faith in mind, which we’ve shown in Pollard, is going to be reciprocated for sure. It’s something that as an individual also he recognises that how critical his role is going to be this IPL and we’re just looking forward to him also providing that impact this season because we have faith in him.

“He’s been in good form recently, in the recently-participated tournament (PSL) by him, he has been in form.”

With Rohit and Zaheer backing so many experienced players in the T20 format, there could be one concern though. Are they losing their own identity and trying to follow the unorthodox template defending champions Chennai Super Kings followed last year?

Two of Super Kings’ top three scorers last season – Shane Watson and MS Dhoni – were over 35 and the third, Rayudu, was 32. Their second-highest wicket-taker, Dwayne Bravo, turned 35 a few months after they lifted the title. If Mumbai do decide to use all their 35-plus players consistently, they’ll have to do it shrewdly.