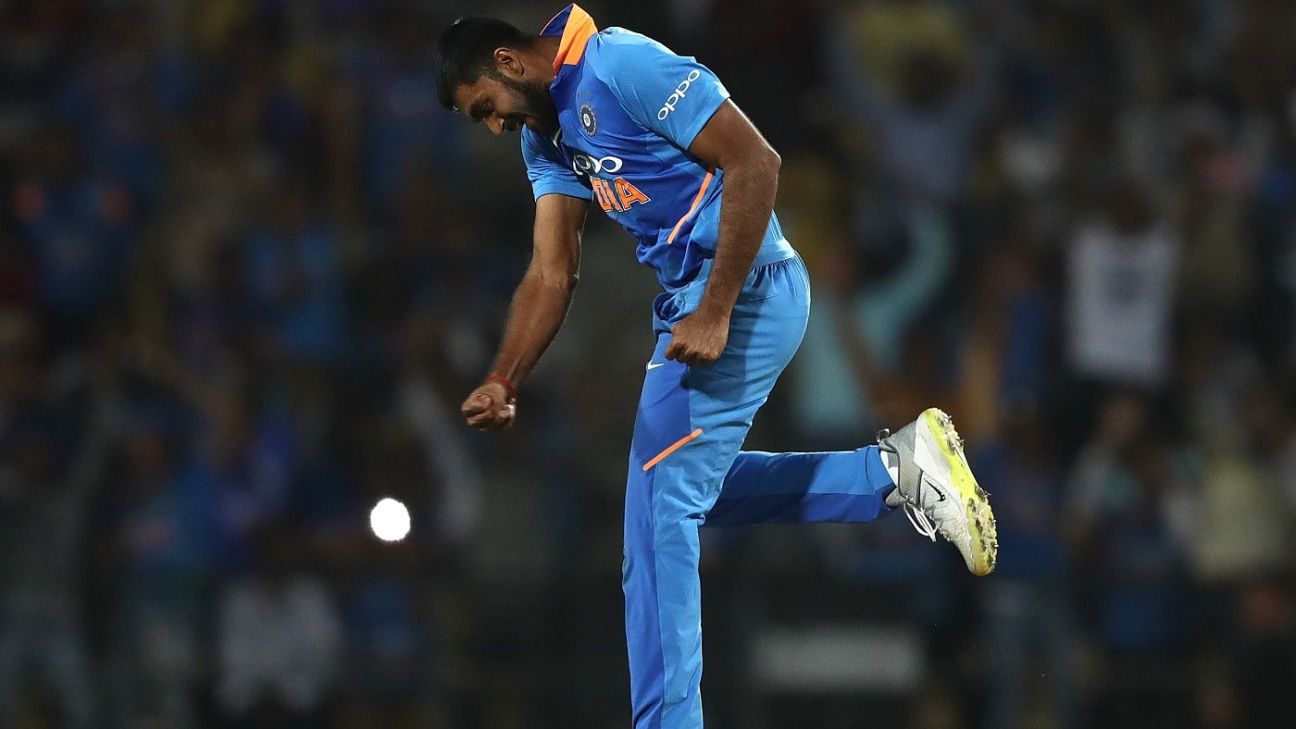 “To be honest, I was literally waiting for the opportunity,” Vijay Shankar said after bowling the last over and winning India the game. The 28-year old debuted in ODIs only two months ago and yet he was given the ball with 10 runs to defend and he did it in some style.

Marcus Stoinis, Australia’s top-scorer, was lbw to kick things off and then, the last man standing, Adam Zampa, was bowled by a picture-perfect yorker, to spark wild celebrations.

“After the 43 over I was telling myself I’m going to bowl the last over and I am going to defend it.” Vijay told the host broadcaster. And his confidence was based on the plans he already had in place, even though he’d only bowled six balls all afternoon and been whacked for 13 runs.

“I was just clear about what I had to do and those things helped me when I came on to bowl. I didn’t have any pressure to be honest. I knew to defend 10 runs is going to be a big challenge but if I got those two wickets it would be great.

“And when [Jasprit] Bumrah came and told me that it is reversing a bit, just trust yourself to bowl the hard lengths. I think when a top bowler like him when he comes and tells me that the hard lengths are very difficult to hit on this wicket and the bounce was also not that great on this wicket, it was a little low than the normal wicket. To hit the right length was a challenge for me at that situation under pressure but the good thing is I was clear mentally”

Stoinis’ lbw was the result of a ball on that hard length – the kind that doesn’t let a batsman come forward and drive, or go back and pull. And just as India had hoped, it didn’t bounce all that much, sneaking under the allrounder’s bat and striking his pad in front of leg stump.

Australia had put up a great fight until that point, and were favourites to take the chase, needing only 29 runs off the final 30 balls with four wickets in hand. But that’s when India went to their death-overs match-winner Bumrah and he struck not once but twice to turn the game.

“I was thinking about 46th over [to bowl Vijay Shankar]” Virat Kohli said at the presentation, “But again, I spoke to Rohit, I spoke to MS and both of them said, you know might as well take the game to the last over with Shami and Bumrah and they get us a few wickets we’ll be right in the game. And yeah, look he was quite composed after a first over like that on a slow pitch. he just put the ball in the right areas and he just asked the batsman to do the job after that. He showed great composure.”

All of that happened after Vijay had already contributed with the bat. His 46 off 41 balls was part of an 81-run fourth-wicket partnership with Kohli that helped India post a total 250.

“That is a great thing I learned today,” Vijay said. “Batting with him [Kohli] helped me to up my intent and I think that helped me to be really open and make best use of the balls I faced. And with that intent, if I can bat every time, I feel I can get better as a batsman every game.

“I was someone who used to bat up the order. Due to different reasons I started batting at No. 7 and that became a permanent slot for me. When I got the opportunity to bat at No. 5 in the India A series in New Zealand, I think I did pretty well there and that gave me the confidence that when I bat in the middle overs, I should just take my time and look to play as many singles as possible and get odd boundaries that can help my batting.”