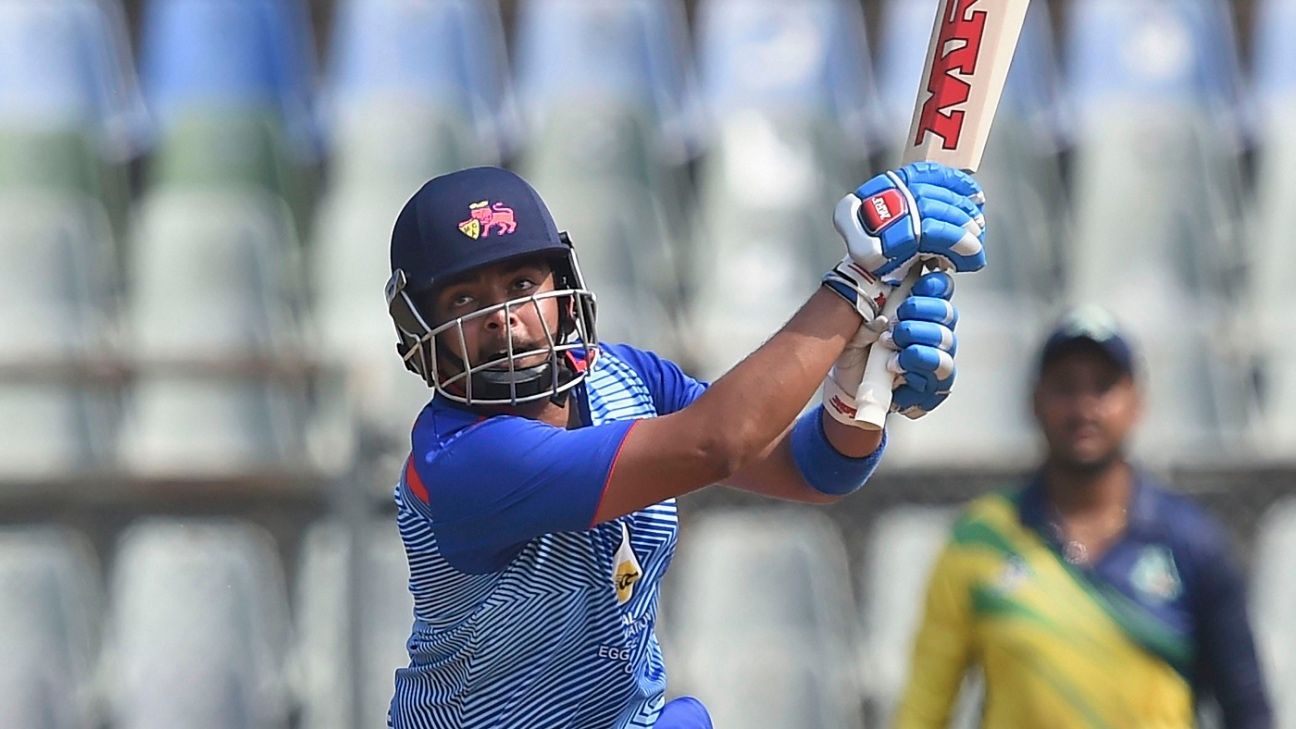 Playing his first competitive cricket in six months following a ban for doping, Prithvi Shaw hit a match-winning 39-ball 63 for Mumbai in the Syed Mushtaq Ali Trophy. He felt down at one stage during his time away from the big stage, Shaw said, but “got his act together” as the day of his return drew nearer. He credited Rahul Dravid, under whom he trained at the National Cricket Academy in Bengaluru during his ban, for playing a role in mentoring him during this difficult time.

The 20-year-old, who made his Test debut last year, was suspended in July for a doping violation during the previous edition of the Syed Mushtaq Ali Trophy in February this year. A BCCI release at the time stated that Shaw had “inadvertently ingested a prohibited substance, which can be commonly found in cough syrups”, leading to the ban.

Shaw returned to action on Monday at the Wankhede stadium, helping Mumbai, who were coming into this game at the back of an upset against Meghalaya, to an 83-run win against Assam to put them on top of the Group D points table.

“This period [of suspension] has been a big learning experience for me,” Shaw was quoted as saying by Mid-Day. “Obviously, I committed a mistake. I had no idea what I was consuming. In that period, I was alone and was trying to stay away from people and their advice. I kept telling myself that I can get out of this mess and be mentally strong.

ALSO READ: Shaw, Bhuvneshwar back in action in contrasting styles

“I got a lot of love and support from a lot of people. There obviously was a period where I was not feeling too well. But then, as the day of my return drew closer, I started to get my act together. If I had gone into my shell at that point of time, I would have felt pressure during the game. I committed a small mistake, now all that is in the past.”

Speaking of his time at the National Cricket Academy, Shaw said: “A lot of focus was on training under Rahul sir’s guidance. I had to clear the yo-yo test. What also helped was that during the practice nets, good bowlers like Kuldeep Yadav, Bhuvneshwar Kumar and Varun Aaron were available and Rahul sir was always there for guidance and sorting out mental issues.”

Shaw made his Test debut against West Indies in October last year, hitting an impressive century to become the youngest Indian Test centurion on debut, and followed it up with a half-century in the next Test. He was then picked for the Australia tour, but he injured his ankle in a warm-up match, which ruled him out of the series. He was not picked in the Test squad for the West Indies tour in August because of a hip injury, and following that the news of his ban came out. As a result, he missed out on the home Tests against South Africa in October and the ongoing Bangladesh series.

“I never thought something like this would happen. I was obviously upset. For the first 20-25 days after I was banned, I was not able to make any sense of things. After that, I stabilised and kept myself mentally strong. Each day was hard,” Shaw said. “I was desperate to play a game. I was excited about today’s game and what better than a victory. I’ll keep scoring runs; this is my job.”