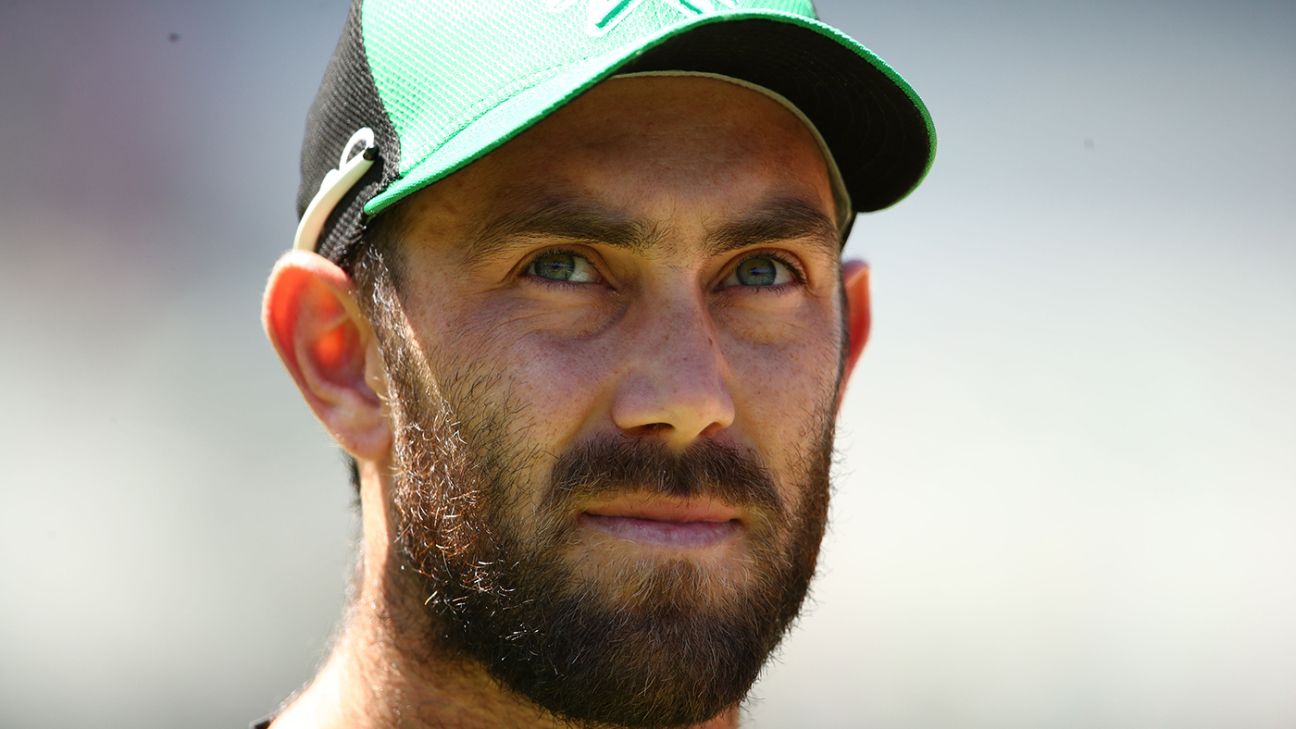 Glenn Maxwell has admitted he was suffering the effects of “four or five years” of near constant travel until his partner Vini helped convince him to step off the international treadmill for a mental health break in October, and has resolved to be more careful about how he plans his schedule in the future.

The start of the Big Bash League and his role as captain of the Melbourne Stars always loomed as a likely moment for Maxwell to return to cricket, though he has been around the Victorian set-up for several weeks now and made himself available for the state’s final Sheffield Shield game before going on Twenty20 hiatus. But he is a much fresher and wiser man for the time away from the game, having re-acquainted himself with home, family and life not lived out of a suitcase.

That had been Maxwell’s lot for most of the past five years, culminating in close to eight months of continuous travel this year as a key component of Australia’s white ball teams, plus stints with Lancashire in English county competition and the beginning of the domestic season for Victoria.

When he finally did elect to step back, following the start of Australia’s T20 series against Sri Lanka, Maxwell was described as “not enjoying his cricket” by the national coach Justin Langer, and he spoke to the likes of Moises Henriques, Australia’s team psychologist Michael Lloyd and the noted sports psychiatrist Ranjit Menon on his way back to a better balance.

“I was pretty cooked when I decided to take the time off,” Maxwell said. “Big reason why I did take that time away is I was pretty mentally and physically ruined. I think it was eight months on the road, living out of a suitcase and that probably had been going on for four or five years, just constantly on the road and it all just caught up with me at that time. I really want to thank Cricket Australia, Cricket Victoria and the Stars for giving me that space and allowing me to have that time away from the game and get myself right.

“It was actually my partner who suggested I speak to someone, she was the first one who noticed it, so I should probably thank her as well. Once I had that initial conversation it was a big weight off my shoulders. My girlfriend was probably No. 1, it wasn’t an easy job for her to deal with me going through my mood swings for the first few weeks, but Michael Lloyd was the guy I had the initial conversation with, he’s been someone who I’ve confided in since back in the academy days, so I’ve known him for well over a decade now.”

“Guys like Moises Henriques, I think he was my first phone call after everything sort of calmed down. He was brilliant for me, giving me something. He has gone through it as well, giving me an idea of what I would expect to see over the next few weeks and he was unbelievable. You go through a lot of waves of emotions over the first few weeks [of the break] and especially that first week, that was probably the hardest, and as I took the time away to get myself right and speak to the right people and have that amazing support network behind me was pretty key.”

It’s clear that Maxwell had looked upon 2019 as a year of much opportunity, but after the World Cup ended in a semi-final appearance and he found himself playing for Lancashire and watching the Ashes rather than playing in them, he is mindful of managing his playing commitments and his self-expectations a little more carefully over the remainder of a career that, at the age of 31, may still have his very best days ahead of him.

“I did put a bit of pressure on myself to try and play as much as I could this year and, rightly or wrongly, I didn’t come out of it the way I thought I was going to. I’ll have a look at that next year,” Maxwell said. “A holiday was actually spending time at home. I spent as much time at home as I could with friends and family. I tried to stay fit, and I still watched a fair bit of cricket over that time, but pretty exciting to get going now.

Contrary to many assumptions, Maxwell said that social media criticism had not been a part of his problems. “I have been a pretty bad victim of social media and a fair bit of abuse but I have become pretty accustomed to it,” he said. “It slides off my back.

“I think I have been pretty hard on myself, I have been my own hardest critic for a long period of time. That can wear you down and it is more the stuff you put on yourself, not so much from the outside. I suppose being able to relax a bit more and enjoy playing the game. I probably look at things a little bit differently but a little bit more respect for taking care of myself in all aspects of the game and not sort of losing sight of taking care of myself in those times where you’re in a hotel room pretty constantly and being able to have that time to myself and refresh.”

As for his return to the game, Maxwell has clearly enjoyed being back with the Stars, now coached by his former state teammate David Hussey, an environment in which the allrounder described as “home” for him. “It probably took a bit longer than I thought it was going to take, it was an interesting six weeks, away from the game and there was probably times I thought I was going to come back earlier,” Maxwell said. “Once I got back into club cricket, the cycle started to feel a bit more normal again and I feel like I’m back at home.

“I’ve been getting back in the swing of things for a while, I’ve been around the Vics change rooms for the last two or three weeks now, so I’ve sort of been floating around and watching a few of the one dayers and just trying to get back into the change room atmosphere again. Coming back here with the Stars feels like home again, a new coach, a bit of familiarity as an ex-player, but it’s a great change room to be a part of, it’s very welcoming.”

As for a return to Australian colours, Maxwell was notably cautious to ensure he did not think about it before concentrating on the fortunes of the Stars, who under his leadership came within a few overs of scooping last summer’s BBL title. “I’ll always put my hand up to play for higher honours for sure,” he said, “but first and foremost I’ve got to perform well for the Stars and lead by example.”