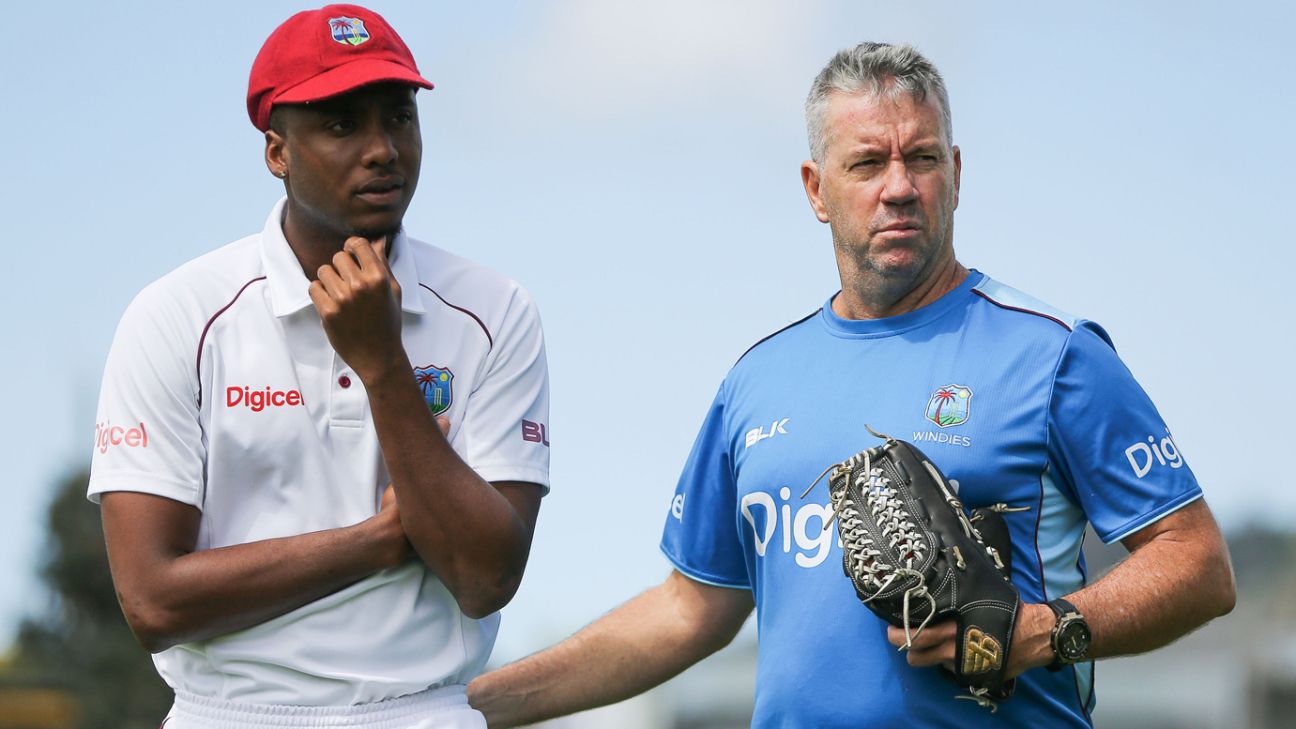 Stuart Law, West Indies’ former head coach, believes that England will be “red-hot favourites” going into next week’s first Test in Barbados, but warns that his old side are fully capable of springing another surprise, just as they produced at Headingley two years ago in one of the most sensational run-chases of all time.

Law, who oversaw a steady improvement in West Indies’ Test fortunes during his two-year spell in the Caribbean, stepped down from his role in September to take up the vacancy as Middlesex’s head coach.

And, while being realistic about West Indies’ hopes of resisting an England team that secured an impressive 3-0 win in Sri Lanka before Christmas, Law was adamant that the players he’s left behind have sufficient skill, experience and determination to rise to their latest challenge.

“Don’t under-estimate the home team,” said Law. “There’s a core group of senior players who’ve been there for a while and proved that they can do it. If England aren’t on their game, West Indies have the team to make an upset.

Despite being the stronger team on paper for the best part of two decades, England’s recent record against West Indies leaves plenty to be desired, not least in the Caribbean, where they have not won a series since 2004 and where they lost their most recent Test – coincidentally in Barbados – back in 2015.

However, for sheer chutzpah, few results in recent times compare with West Indies’ incredible win at Headingley on the 2017 tour, when Shai Hope – with two hundreds in the match – and Kraigg Brathwaite – with 134 and 95 – squared the series with one to play in a daunting run-chase of 322.

“I think the euphoria of that first Test win in England in 17 years was something that is still being celebrated in the Caribbean,” said Law. “They don’t need much to have a party out there.

“Some of the kids who stuck their hand up in that match are still involved now… Hope, Brathwaite, Jason Holder, Shannon Gabriel, those guys played their hearts out. Gabriel bowled fast every time he bowled the ball, and the two batters had a dream Test match.

“They can do it, that’s the thing. It comes down to self-belief. If they’ve got self-belief they can achieve anything.”

Perhaps the most remarkable aspect of that Headingley win was its context. It came only days after England had crushed the same set of players by an innings and 209 runs in a bitterly one-sided first Test.

“To come back after Edgbaston in that way, I’d have to say it was the best Test performance I’ve been involved with,” said Law. “The enormity after what happened … you’re like a proud dad, watching the kids have a red-hot dip and all of a sudden they start to play cricket you can only dream of playing.”

Not that Law would claim much of the credit for the turnaround, however.

“I didn’t have to say much,” he said. “We sat down in the dressing room on [what should have been] day five, and the players just had a meeting. We were there as coaches to facilitate and prompt here and there, but they did all the talking.

“They didn’t like it. They got abuse from back home – you should have read some of the social media abuse, and that was coming from their home crowd. It was tough for them, but I didn’t have to say too much. It was about pointing them in the right direction and saying you can go one of two ways. You can fall away and lose the series 3-0, or you can stand up and fight. What do you want to do?

“They came up with what they wanted to do, and gave a very honest account of where they were at during that Test match. And once you’ve had that conversation, you are accountable for what you do going forward. They were all accountable at Headingley, and they stuck their hands up.”

West Indies’ hopes in the coming series have been boosted by the recall of Darren Bravo, a proven Test-match batsman who played a crucial hand in that Barbados win in 2015. He had been unavailable for most of Law’s spell in the Caribbean after becoming embroiled in the stand-off with CWI over player availability for T20 leagues. However, his return to the fray, says Law, is a sign of progress.

“I think there’s been massive improvements,” he said. “Johnny Grave, the CEO, and Jimmy Adams, the director of cricket, have made massive strides to raise the professionalism.

“But you can’t rush these disputes. I didn’t really understand the depths, but at times you have to side with the players. I had brief conversations with Darren and he made some very good points.

“He’s a high-class player, West Indies could do with his experience, and you’d like to see commitment from other players as well. But the T20 riches are big, and the West Iindies boys are high in demand, so you can’t blame them, even if playing for West Indies is a shop window for these tournaments.

“I didn’t blame one player once for choosing T20 cricket over Test cricket. Sure, I was disappointed, as I’d have loved to have them playing for West Indies, but they had other issues to keep to, and supporting their families was one of them.”

In fact, supporting his own family was Law’s primary reason for calling an early end to his time with West Indies, and instead seeking out the security that comes with a four-year deal at Middlesex.

“I’ve been asked to improve Middlesex’s white-ball cricket which has not been as competitive as it should be for a while so that will be a big focus,” he said. “But not at the expense of the Championship.

“We’ve essentially still got the core of a group of players who won the County Championship a couple of years ago so we know they are capable of winning games and getting us back into the first division.”