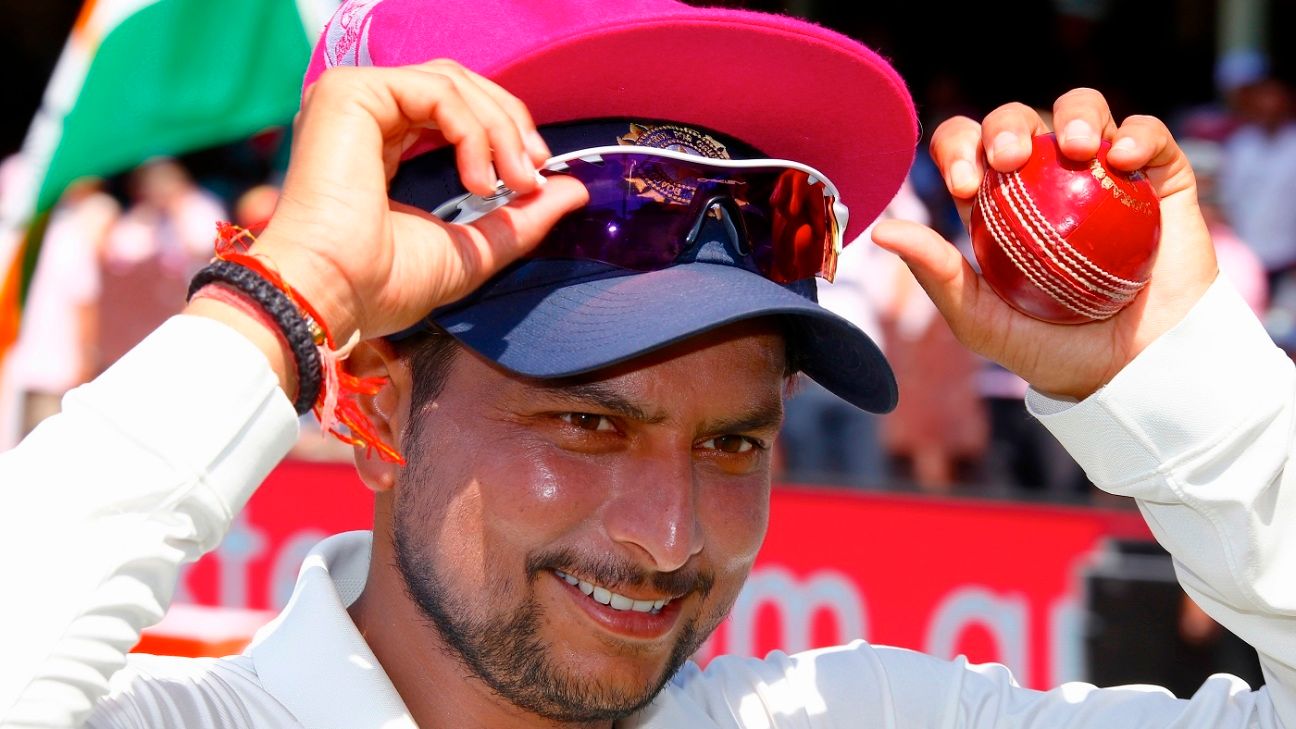 Familiarity breeds contempt, they say. In cricket terms, it allows batsmen to read a bowler, learn the tricks, pick the variations. It’s something Kuldeep Yadav has experienced in his young Test career.

Kuldeep is unique in India: the only left-arm wristspinner to represent his country in any format and his skills are still a rarity worldwide. His figures are often better early in a series or a Test than later, as batsmen move from struggling to read him to picking his wrong ‘uns.

On his debut against Australia in the final Test of the 2017 home series, Kuldeep took 4 for 68 in the first innings and 0 for 23 in the second. He started last year’s tour of England with a bang, taking 6 for 25 in a Player-of-the-Match performance at Trent Bridge but had diminishing returns in the following games, as England’s players adapted and grew more comfortable attacking.

When India misread the Lord’s pitch for the second Test and plumped for two spinners, the likes of Joe Root had seen enough and while Kuldeep only bowled nine overs and went wicketless for 44 runs it seemed that familiarity had negated his novelty.

In the time since leaving that tour following the Lord’s Test, Kuldeep has taken 10 wickets in two home Tests against West Indies and gone back to his childhood coach, Kapil Dev Pandey, in a bid to get back to the basics of his craft.

“Sometimes it’s hard you know when the batsmen are picking you,” Kudeep said after the third day’s play in Sydney. “And that’s the beauty of cricket you have to keep learning every day and I’m still learning every day.

“That England tour was challenging for me and when I played there in the Lord’s Test match, after that I really worked on my bowling with my coach so you know for a spinner, any spinner, it’s very important to stick with the basics and just follow what we call the basic thing of spin bowling: little bit of flight, turn the ball.

For the second time in his Test career – this is just his sixth appearance for India in the format – Kuldeep finds himself bowling in the final match of a series against Australia with his side almost certain to seal victory. In a side blessed with the spinning strength of R Ashwin and Ravindra Jadeja, Kuldeep has become a kind of joker in the pack for India, a wildcard that can be thrown into the mix when something different is needed or injuries are an issue. But it also makes it difficult for him to spend an extended time in the side and learn to adapt to batsmen just as they become adept at reading him.

“I have played enough cricket to have decent enough knowledge and in Test cricket I will need a little more time perhaps to improve,” Kuldeep said. “The more you play with red ball the more you can improve.

“So definitely there are many senior players…Virat is there, Rishabh also keeps telling [me things], any wicketkeeper will tell you things. It’s easier in ODIs because you are playing regularly and [MS] Dhoni is there, so he has played so much cricket he keeps telling you what to do.

“Test cricket is similar, the more you play the better you can read batsmen and there is enough time to plan for batsmen, can bowl more overs, change the field. In ODIs you have only 10 overs and bowl to a field plan because you can have only four fielders outside the circle. Test cricket is quite different. [There are] enough senior players who are happy to talk and help.

“When you know you have Ashwin and Jadeja, the best spinners and you are the third one, so there is a lot to motivate yourself and learn from them. They keep pushing me in the nets that you have to bowl this way in good areas. So I am very motivated and it is important to learn from them because they have played enough cricket and I am still learning.”