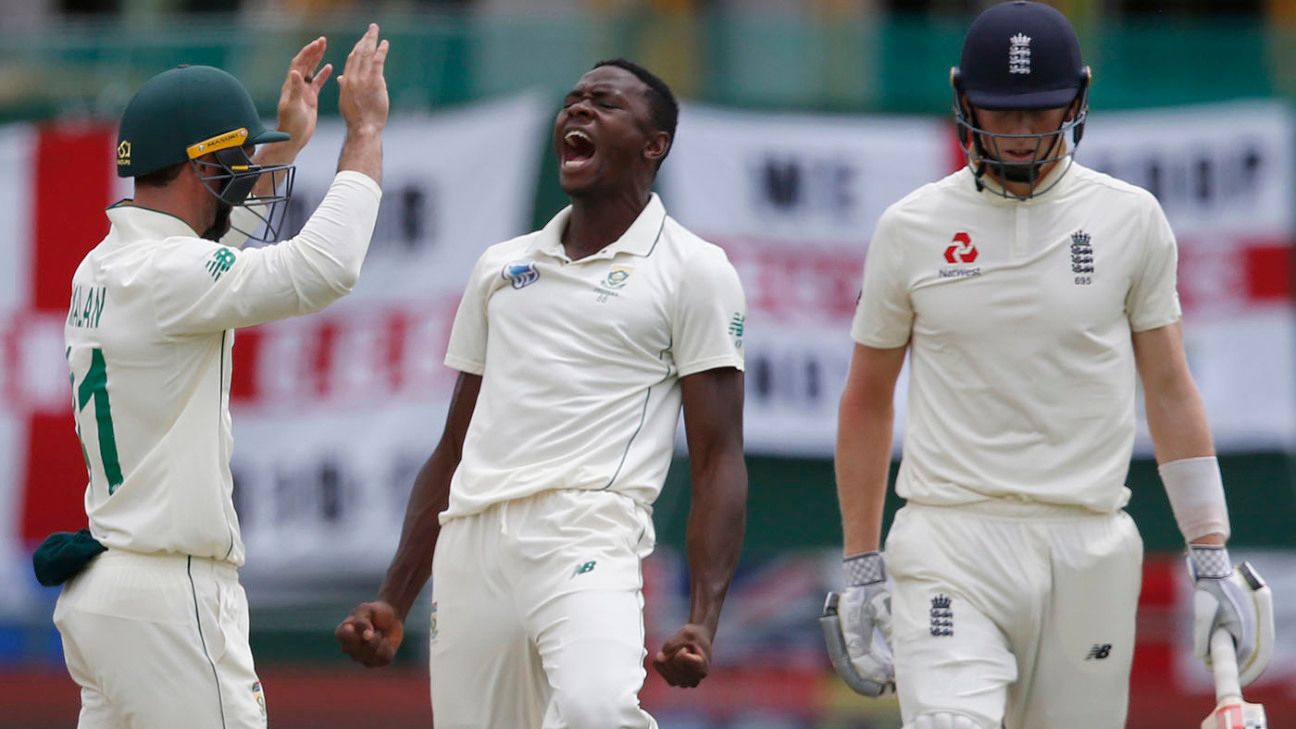 Mark Boucher, South Africa’s coach, is in a quandary. He needs to find a way to ensure his premier strike bowler, Kagiso Rabada, does not lose his instinctive aggression but also that Rabada does not use it beyond the parameters of the ICC’s Code of Conduct, as he did to his cost at St George’s Park.

After bowling Joe Root with a delivery that beat the England captain for pace, Rabada continued in his followthrough all the way to the edges of Root’s crease, where he let out a rip-roaring scream while squatting almost to his haunches and holding the outsides of his legs.

Match referee Andy Pycroft deemed that to be a breach of clause 2.5 which forbids send-offs that make use of disparaging or provoking language, actions or gestures, and charged Rabada with a Level 1 offence which he did not contest despite Boucher seeing “nothing wrong,” with the celebration.

Rabada will miss the series finale in Johannesburg as a result of accumulated demerit points (this was the fourth in the last 24 months) and though Boucher has accepted Rabada’s fate, he now faces the challenge of trying to keep him both fired up and disciplined.

“KG bowls at his best when he is nice and aggressive,” Boucher said. “It’s trying to find a balance of keeping him nice and aggressive and not boxing him in with regards to that. But just understanding the laws of the game and trying to stay on the good side of it, rather than the flip side. It is going to be tough but it is something we will have to address.”

In theory, Boucher disagrees with Pycroft’s decision, which he communicated at Thursday’s post-play meeting. “We did voice our concerns over the rule that he quoted to us and a couple of variations of the rule,” Boucher said. “It’s a tough one because the talk is about excessive celebrations in the area of the batter and making contact with the batter, I don’t feel he made any contact with the batter whatsoever. He wasn’t even looking at him. Yes, he was in his space but there are probably different ways you can look at it. It doesn’t really matter what we feel about it. The match referee has made up his mind.”

Boucher regards the Level 1 sanction as a “slap on the wrist”, and not something “really bad”, but acknowledged that he is not entirely familiar with the demerit system which came into effect in September 2016. In getting to know it a little bit more, Boucher’s disappointment is split between the severity with which the code was applied and Rabada’s lack of control over his own conduct.

“You don’t want to take all the aggression out of the game of cricket,” he said. “You’ve got two countries playing hard cricket against each other. In a heated situation, guys are trying really hard and sometimes the emotions overflow. From that side, maybe I am a little bit disappointed in the rules and regulations but if you know the rules and regulations, you have got to stick to them. KG knows what he can and cannot do and he maybe just pushed a little it too far.

“KG is a team man as well so he will feel very disappointed. It’s something that we have to address and get a good balance. In our days, we didn’t have to deal with this stuff because we could say pretty much we wanted and get away with it. It is a bit of a learning curve for me with all these new rules and regulations that have come in, to try and get the best out of him with his aggression but also try and monitor him in the discipline side.”

While the confrontational exchanges of Boucher’s playing days are unlikely to return, wars of words continue to take place. If they are audible through the stump mic, they are punished, which was the case with Jos Buttler at Newlands. Buttler was heard calling Vernon Philander a ‘f****** knobhead’ and was given the same sanction as Rabada – a 15 percent match-fee fine and one demerit point. It’s instances like that that Boucher thinks shows the intensity of the moment and that should not be taken out of the game.

“I am a little bit worried,” Boucher said. “There’s been quite a few things happening in world cricket, we saw it last game, where sides are going for a win, they are pushing hard for a win. England had been in the field for a long time and the swear words weren’t great, but it’s aggression. In our day, we’d push very hard for a win and try make batters feels uncomfortable if we are on top. The laws have changed. I understand where the ICC want to go with it. Hopefully they find a balance where they don’t take emotion out of the game. I still think there is a very big place for that in cricket.”

South Africa had not forgotten Buttler’s remarks and greeted him with a volley of insults in a short-lived innings, which was one of their brighter moments in an otherwise flat day. Asked whether news of Rabada’s sanction affected the fielders, Boucher said he didn’t think so. “I don’t know if most of the guys actually know,” he said. “We weren’t 100 percent sure how many demerit points he had but then we found out this morning. I don’t think it affected the guys too much. They still feel they’ve got a big chance to do well.”

That will be South Africa’s focus for the next three days, during which they will still have Rabada in their ranks. Then, they will move to the series-decider in Johannesburg, where they will either be in a must-win situation to save the series or a must-not-lose to avoid squaring it. Whichever it is, they will have to do it without Rabada, who Boucher said will be sorely missed.

“He is a world-class performer, especially at the Wanderers, where I think he would be very effective. So yes, very disappointing but we’ve got a Test match to try and save over here. We’ll have to have a look at our options once we get to the Wanderers.”

South Africa have three options in the current squad: allrounders Dwaine Pretorius, Andile Phehlukwayo and left-armer Beuran Hendricks who could be brought in but may cast the net wider ahead of the match.