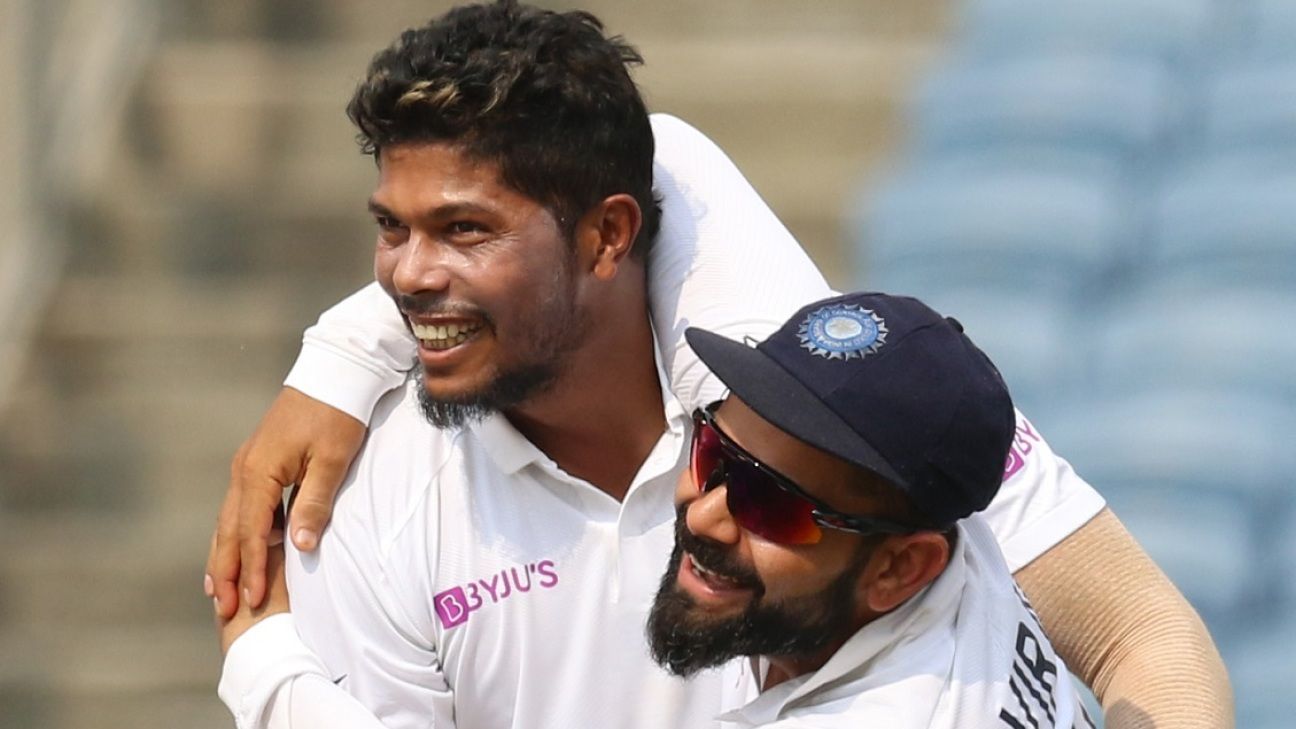 Umesh Yadav bowled more overs in Test cricket than any other Indian fast bowler in 2016 and 2017. Since then, though, he has slipped to fourth – or even fifth – sometimes in India’s pace pecking order, and had featured in only five of their last 18 matches before the Pune Test against South Africa.

It can be difficult for a fast bowler to stay positive, and keep himself in rhythm in times like this, but that’s exactly what Yadav has sought to do.

“This is part and parcel [of the game], it will keep happening as long as I play cricket,” he said after picking up match figures of 6 for 59 in India’s innings win. “These situations will keep coming, and I know I have to be ready when I get my chance. For that, it’s important to stay positive, keep playing the game, and stay focused.

“So, I always make sure I keep getting match practice, whether it’s Ranji Trophy or India A or anything else. These are the things that give me positivity, and my focus remains sharp because the more matches you play, the more match practice you have, which is very important, because as much as you may bowl in the nets, it’s different when you play matches, and know how you’re supposed to bowl, what planning you need to do.

“These things (selection) aren’t in my hands. I can’t say, ‘no, I need to play every Test match’. All the bowlers are good, all of them are doing well, and there’s healthy competition. Whoever does well will keep playing. At some stage, each of us will get chances, and when that happens, I need to be ready, positive, and focused.”

ALSO READ: ‘We’re not going to take the foot off the gas in the third Test’ – Kohli

Yadav wasn’t originally part of India’s squad for this series, and only came in when Jasprit Bumrah suffered a stress fracture. He was part of India’s previous squad, in the West Indies, but didn’t feature in either of the Tests. With the knowledge that he wouldn’t get regular games for India, especially since he is not usually part of the ODI and T20I squads either, he requested the selectors, during the West Indies tour, that they pick him for India A as often as possible.

“In the West Indies, when I was not playing, the selectors picked me [in the India A team that was concurrently touring the region],” Yadav said. “I knew I wasn’t getting that many matches, even in the T20s and one-dayers that were happening in between. So there was a gap, and I had told the selectors that I’d like to play whenever possible for India A because match practice for me is very important.

“At that stage it was a fully off-season for me because there was no Ranji Trophy, no one-dayers, nothing. So, I asked them [to pick me], and told them I wanted to play matches, and they said, ‘Okay’. If you’re playing matches, your mindset and planning and focus remain sharp.

“Suddenly, if you’re just practising at home or wherever, and you have to directly play a match, it becomes difficult, because as a fast bowler you’re out of the game. Bowling in a match and bowling in the nets are very different.”

Before the Pune Test, therefore, Yadav kept himself in rhythm by playing four multi-day matches against international opposition, two of them first-class. The rhythm showed in the way he troubled South Africa’s top order in both innings, running in with intensity and swinging the new ball at pace. India enforced the follow-on after taking a first-innings lead of 326, and Yadav said he was only too happy to bowl again.

“From my point of view, I felt, I don’t know about the others, but I need to bowl,” he said. “All bowlers said that we are ready if follow-on is enforced as we didn’t feel the need to rest. The intent was to win, and not, ‘Let’s bat a bit and stretch the game’.

“The wicket wasn’t difficult to bat on. Fast bowlers didn’t have much help as there was no seam or swing movement. The ball only swung for a few overs. There was no pace off the pitch and you needed to hit the deck. If we get some breakthroughs with new ball, it becomes easier for the spinners.”

Yadav came into India’s XI as a fifth bowler, and he was pleased that the selection had worked as planned.

“We had to bowl with 100% effort,” he said. “There was bounce, but the pitch lacked pace. We had to hit the deck hard to extract the pace.

“If you bowl long spells, you will get tired quickly and if you have five bowlers, you have options. We could come in, bowl [spells of] three overs with full intensity, and then the spinners would come in. I think this (playing five bowlers) was a good idea, and we could execute it as we had planned.”