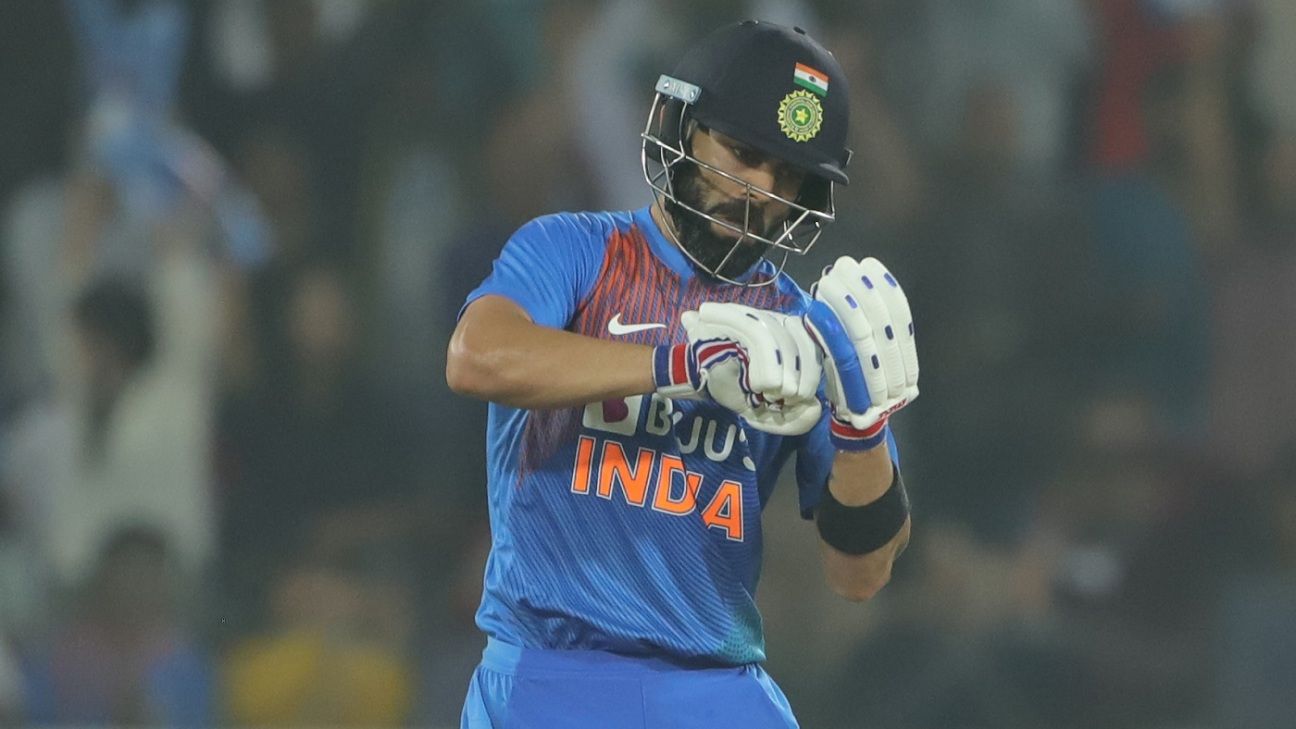 Virat Kohli smashed his highest ever T20I score, making 94* off 50 balls as India chased a massive target of 208 against West Indies in the first T20I in Hyderabad. Kohli’s innings was played in two parts, both sharply contrasting with each other. Off the first 25 balls he faced, he made only 26 runs. Off the next 25, there was a cascade of 68 runs.

While Kohli acknowledged that he was trying to hit the ball “too hard” at the start given the ever rising required rate, he reverted to type when he realised it wasn’t coming off. He also gave a peak into how his mind works in T20 cricket.

“I’ve always believed in the past as well, whenever I’ve played T20 cricket. I’m not someone who comes to the stadium wanting to entertain people hitting the ball in the air. I want to get the job done,” Kohli told Star Sports after the game. Within that, if I get the opportunity to hit sixes, I will. But the aim is not to play slam-bang cricket. I think my role in this team is to bat long. Myself or Rohit (Sharma), one of the guys has to play till the end because our strength is usually striking in the later half of the innings, and our strike rate goes up. That’s the role I play in every team that I’ve played in till now.

Kohli also jokingly suggested that if any youngsters were watching his innings hoping to pick up pointers, they should ignore the first half. “All the young batsmen watching, don’t follow the first half of my innings,” he smiled. “Because that was really bad, I mean I was trying to hit the ball too hard. I think it was just about keeping up with the game. You know, 10-plus an over to chase and I didn’t want to put KL (Rahul) under pressure, so I wanted to contribute from the other end, striking at 140 at least. But I couldn’t get going properly.”

Kohli then significantly picked up the pace in the 15th over, which was Jason Holder’s last one. The first ball was lifted beautifully over long-off to take him to a half-century, while the second was carved over short third man, and after that Kohli began middling pretty much every ball.

“That one over of Jason, I started getting a few in the middle of the bat,” he said. “Second half of my innings, I analysed where I’m going wrong and I just started holding my shape. I thought I’m not a guy who slogs the ball, I’m more of a timer, so I’m going to rely on my timing. And then the pitch was good enough for me to go through the line of the ball and just play my shots.

“There are a lot of distractions when you’re chasing a big total, when you keep looking at the scoreboard all the time. But I think after four-five dot balls, the game puts you in a zone where you have no other option but to just go back to your strengths,” he added. “I think if the focus is on the game and you’re not being too nervous, you’ll find a way out. It’s all about just being aware of what the game demands and what your strengths can be in that situation, and you just try and execute it.”

Kohli also indulged in a bit of theatre on the field when Kesrick Williams came on to bowl the 16th over, mimicking Williams’ celebration of writing in a notebook after having hit the bowler for a four and a six. Kohli showed he had a long memory, having remembered Williams celebrating in that manner when he dismissed the Indian in 2017.

“It happened to me in Jamaica when he got me out, so I thought I’ll tick a few in the notebook as well,” Kohli said. “But all good. There were a few words out there but smiles in the end. That’s what you want to see: good competitive cricket, but at the end of the day we shake hands and give each other a hi-five. That’s what cricket is all about: play it hard, but at the end, just have respect for your opponents.”