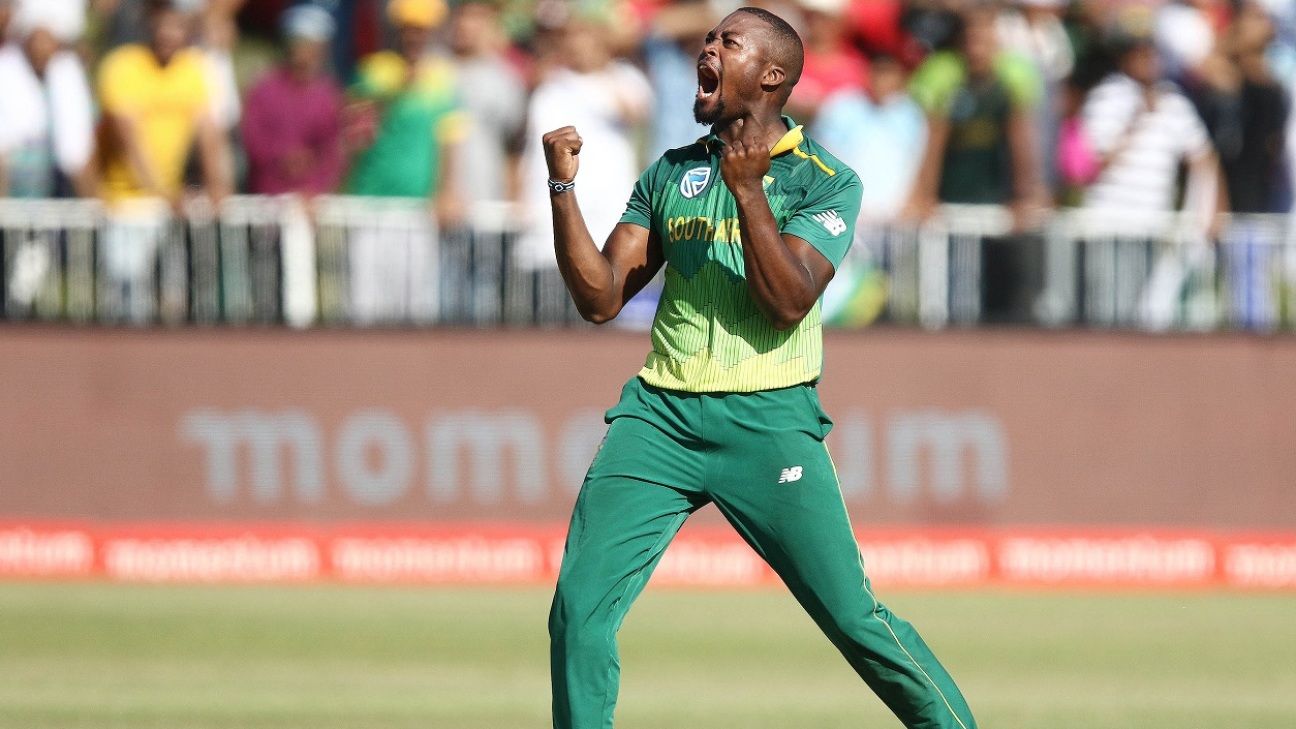 Ahead of the last match of Pakistan’s tour, Andile Phehlukwayo reflected on his nerveless final over at the Wanderers that sealed the T20 series for South Africa. Pakistan needed 15 from the final six deliveries with Shoaib Malik at the crease, Phehlukwayo gave away just seven runs and picked up two wickets. It was a high-pressure moment, but Phehlukwayo insisted: “I do really enjoy them.”

“I always land up in those situations,” he said. “I do really enjoy them. Sometimes it won’t go your way and you’ll be criticised, sometimes it will. It’s really nice when it does go your way, but when it doesn’t you need to pick your head up and go through your training and remember the things that worked well.

Whatever drills coach Ottis Gibson is running at training, they are clearly working. But being ice cool at the death is a skill that Phehlukwayo has demonstrated before in domestic cricket, so he also has experience to draw from. Indeed, it was his match-winning performances with the ball for Dolphins in South Africa’s domestic T20 competition that first brought Phehlukwayo into the spotlight: in the 2015-16 season, he was their leading wicket-taker in the competition as Dolphins reached the final, and subsequently earned himself a place in the South African XI that played against a touring England side in Kimberley, further raising his stocks.

“David [Miller], before the last over, told me I was going to bowl the last over,” Phehlukwayo said of the Wanderers T20I. “It’s a situation that I’ve been in in the field before for the Dolphins, so I tried to think of options and we were debating and talking about different fields we could have, different variations, plans to bowl to a certain batter. I just took it back to previously, when I’ve done it before, the things I did, the training sessions, what works and what doesn’t.”

“At the Dolphins I was put into those positions quite a lot with Lance [Klusener, former Dolphins coach] there, so you learn to take responsibility, ownership. And if you’re put in the situation, you want to achieve. Every player wants to win big moments. It won’t always go your way, but the more often you’re in those situations, the more you’ll get it right.”

While Phehlukwayo sealed the game – and the series – for South Africa, there have been match-turning performances from several players. South Africa’s 2-0 series lead over the world’s top rated T20I side is all the more remarkable given the rotation and experimentation in South Africa’s white-ball cricket at the moment. Faf du Plessis and Quinton de Kock, two of their most experienced campaigners, were not even part of the second match, but in their absence debutants Janneman Malan and Lutho Sipamla contributed performances which suggested they should be at home at this level.

“Every individual that has come into the squad has put in a performance,” Phehlukwayo said. “The depth in the system is obviously showing. There have been a lot of changes in the individuals who have been playing, but they’ve put up their hands and they’ve contributed. The confidence that we’re taking from this series is really good, because they’re No. 1 in the world in T20 cricket. We pride ourselves on playing good, positive cricket.”

While the format is different, any sort of limited-overs cricket that South Africa play between now and the World Cup will be scrutinised with that tournament in mind, and in this regard Phehlukwayo suggested that the heart-stopping denouement to Sunday’s game will provide experience that could prove invaluable at the global tournament in three and a half month’s time.

“It’s really crucial, because those type of moments are moments that are going to happen at the World Cup,” he said. “Big crowd, tough situation, best team in the world. It’s going to happen. We’ll take that in and we’ll remember it. More often than not if we have those types of situations and we win, it’s good for us to remember that feeling. But even when it doesn’t go our way, we also need to learn from those types of situations. It’s always nice to go back to the dressing room, sit down, debate what could have gone wrong, what could have gone right.”

While he is rapidly staking a claim to be a part of South Africa’s World Cup squad – and possibly even their ideal candidate for the No. 7 position – it’s important to remember that Phehlukwayo is only 22 years old and still developing as a cricketer. He clearly has the skills, but he’s also learning as he goes.

“I’ve learned quite a lot of things,” Phehlukwayo said. “There are aspects of my game that I still need to improve. I’m growing every day, talking to a couple of guys in the changing rooms, sharing information, talking to other guys, opposition. And just the relationship between the players. You grow a lot when you’re sharing things and experiencing things on the field, especially when you’re playing a lot of cricket. So the player I was three years ago and the player I am now, it’s really a lot of mental stuff. The ability to perform is still there. Hopefully I can still grow and become better and put in consistent performances. Sometimes you’ll have ups and downs, but that’s how the cookie crumbles.”