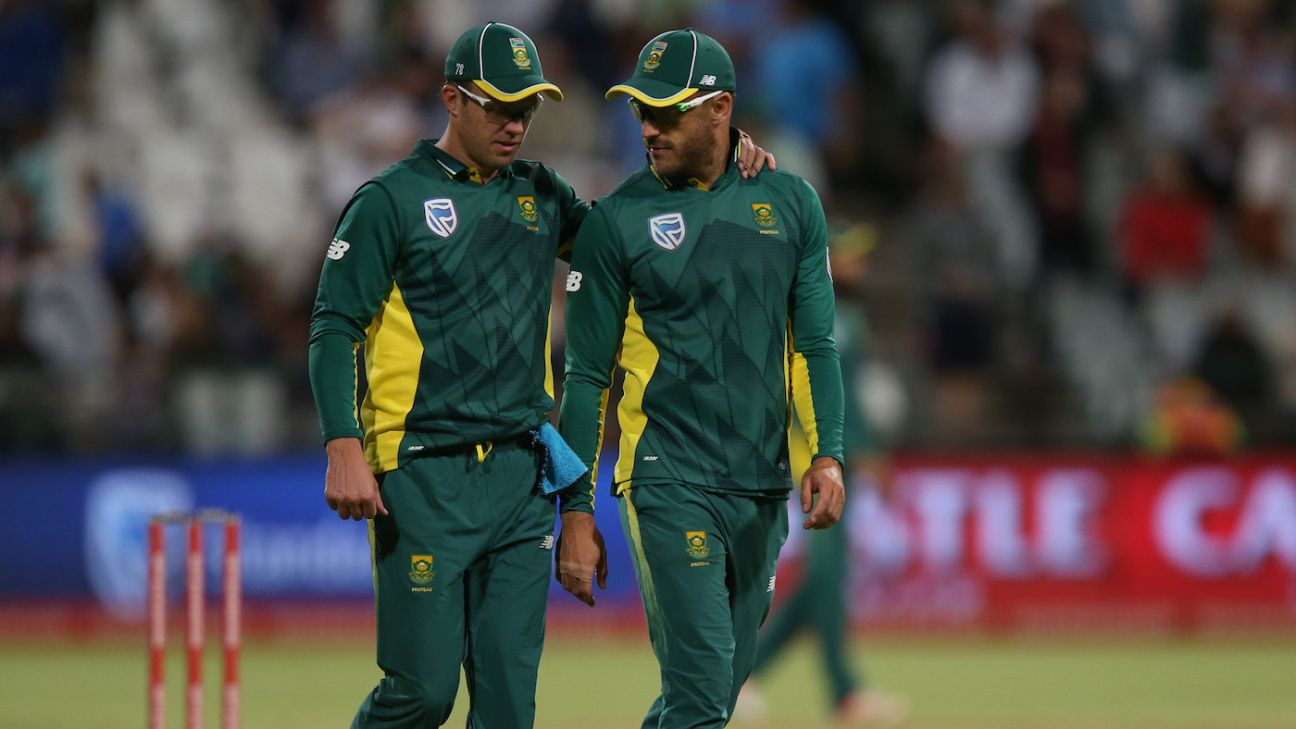 Former South Africa captain AB de Villiers has revealed that on the day he announced his international retirement, in May 2018, he was asked privately by a person from within the Cricket South Africa set-up whether “the door was still open” for him to play the World Cup. De Villiers said yes then, but insisted that he did not push for late inclusion when he contacted Faf du Plessis shortly before the squad was named.

de Villiers did not want to name the person who had asked him whether he was available for the World Cup, but said that was what prompted him to “casually” talk with du Plessis, the South Africa captain, during the IPL and repeat that he was available for World Cup selection but “only if required.”

That conversation, as revealed by ESPNcricinfo in June, happened just days before South Africa’s World Cup squad was going to be picked. Linda Zondi, chairman of the South Africa selection panel, said that de Villiers’ “desire” to be included in the squad came as a “shock” to not just him but du Plessis and Ottis Gibson, the South Africa coach.

However, de Villiers has now said he never wished to “force his way” into the squad. “On the day of my [retirement] announcement, I was privately asked whether ‘the door was still open’ for me to play in the World Cup,” de Villiers said in a statement, seen by ESPNcricinfo. “I was asked. I did not offer. I quickly replied ‘Yes’. With hindsight, maybe I should have just said no, but my natural instinct has always been to find a way to oblige whenever possible.

“During the weeks and months that followed, there was no formal contact between Cricket South Africa or the Proteas and me. I didn’t call them, and they didn’t call me. I had made my decision and the Proteas moved on, enjoying success under the expert guidance of coach Ottis Gibson and the outstanding captaincy of Faf du Plessis.

“Faf and I have been friends since we were at school together and, two days before the World Cup squad was announced, I contacted him for a chat. I had been in decent form during the Indian Premier League and casually repeated what I had said when asked a year earlier, that I was available if required… but only if required.

“I made absolutely no demands at all. I certainly did not try to force my way into the World Cup squad on the eve of the tournament, and did not expect to be included. There was no burning issue from my side, and no sense of injustice.”

According to de Villiers the reason he did not speak out immediately after the news broke was because he did not want to distract South Africa’s faltering World Cup campaign. Many fans, former cricketers and media were critical of de Villiers’ move with some saying he was not entitled to make such a late approach just because he was a South African great.

De Villiers said that he was making the statement now because of the criticism that followed. “I continue to be asked to comment on the disclosure, and distortion, of a private conversation that took place just before the squad was announced and, for the benefit of anyone who may have felt let down, would like to explain what happened.

“First, I announced my retirement from international cricket in May 2018 because I wanted to reduce my workload and spend more time with my wife and young sons. Some have insisted I was motivated purely by money. They are wrong. In truth, I have turned down many lucrative offers to play around the world, and have cut the time spent away from home each year from eight months to just over three months.”

De Villiers stressed his conscience was clear and he had retired for “honest” reasons. “Then, out of the blue, on the evening after the Proteas lost to India, suffering a third successive World Cup defeat, elements of our private conversation were disclosed to the media, and distorted to cast me in the worst possible light.

“The story was not leaked by me, or anybody associated with me, or by Faf. Maybe someone wanted to deflect criticism. I don’t know.

“As a result, I was unfairly described as arrogant, selfish and indecisive but, with all humility, my conscience is clear. I retired for honest reasons and, when asked if I could be available for the World Cup, agreed to keep the door open. In the event, understandably, the team moved on. No problem. I am not angry with anybody.”

Despite what he called an “unpleasant and unnecessary saga”, de Villiers said he would always continue to support South African cricket. “Now, at this stage of my life, I would like to continue spending time with my family and to play in selected T20 tournaments in SA and around the world.

“I have been massively proud to have played for, and indeed captain, my country on the cricket field. My relationships with the Protea players remain as strong as ever, and I will always be available to support and assist the next generation.

“Lastly, in stating my side of this unpleasant and unnecessary saga, I want to stress my continuing support for the team and the game that has shaped my life and provided me with so many lasting friendships and incredible opportunities.”