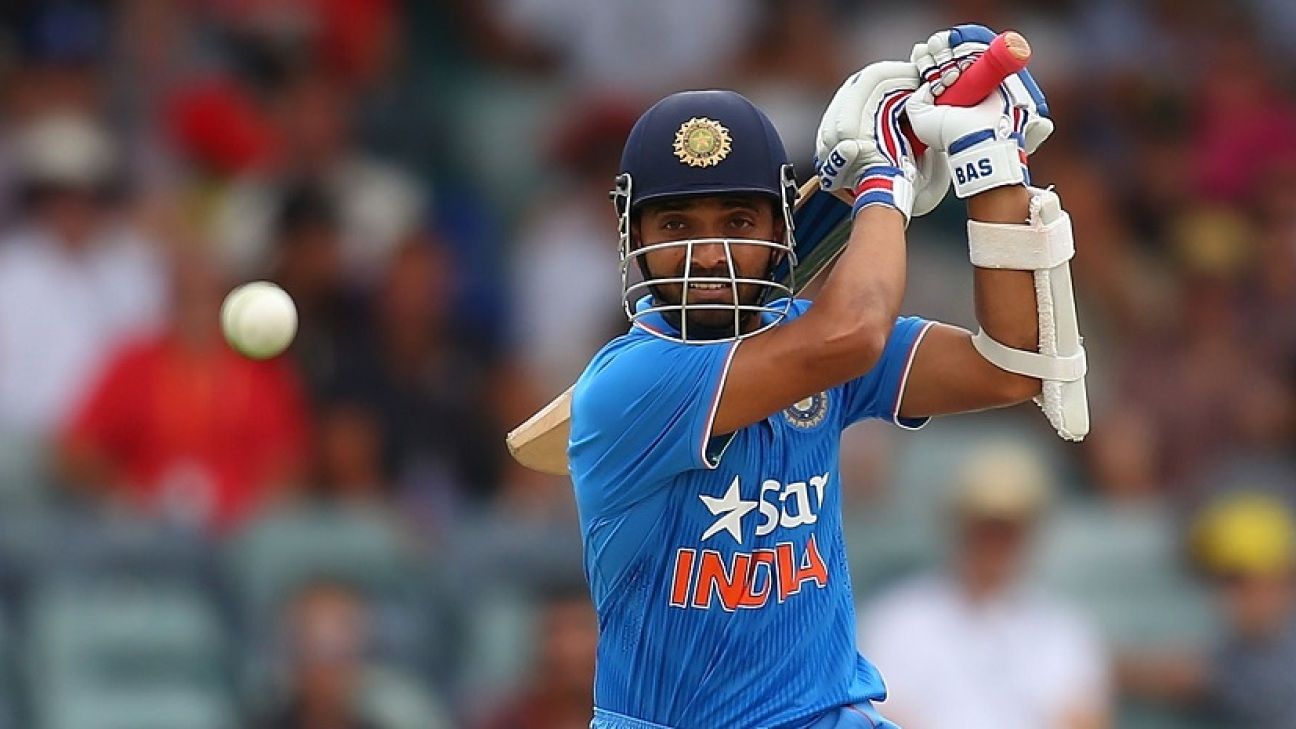 Ajinkya Rahane has asked for more and consistent chances in limited-overs internationals for India. Rahane, India’s vice-captain in Tests, last played an ODI in February 2018, when captain Virat Kohli said the team management was looking at him as a prospective No. 4, but has been out of favour since that tour of South Africa.

“As a batsman, I am aggressive but, by nature, I am quite shy,” Rahane told the Hindu. “I prefer to let my bat speak but sometimes it’s important to speak the truth. I have always believed the team comes first and respected the management and the selectors’ decision. I will continue to do that.

“The point is that if as a player I have always played for the team, then I deserve chances more consistently. That’s the least I am asking.”

Rahane said that confidence from the management and a consistent run were important for a player to think of the team and not securing his own place for the next game. He pointed to his moving down the order to suit the needs of the team. “Frankly, I have never thought about my personal achievements. I did well as an opener against West Indies and Australia but in South Africa, the management thought I would be suitable at No. 4. I said ‘whatever you prefer’ because the team wanted it.

“But every individual needs confidence and positive vibes like ‘yes, you are there and you are doing it for the team’. I think everyone knows that if someone is backing you, the player gets the confidence to play fearless and positive cricket.”

Rahane has played 90 ODIs, averaging 35.26 and striking at 78.63 runs per 100 balls. On his ODI comeback in South Africa in early 2018, when India won 5-1, he played all the matches, averaging 35 with a strike rate of 76.92. He scored a 79 and an unbeaten 34 in two of the matches, where he batted at No. 4 because India’s first-choice openers, Rohit Sharma and Shikhar Dhawan, were both available.

“I keep negative thoughts away and you never know, things can change any time”

Since then, with much of the planning centred on the World Cup in 2019, India have tried out various other options for the middle order. The impression from the days of MS Dhoni as captain has been that Rahane is good against the hard new ball, but struggles to maintain a high strike rate when the ball goes soft in the middle overs.

“If I feel let down, my mindset will turn negative and so, I don’t really think that way,” Rahane said of his approach. “I leave that decision to the selectors because they are the best judges. I also believe that my performances were really good. If you see the last three-four series, my average was around 45 to 50. After I was dropped, I went back to domestic cricket and feel I have done reasonably well.”

According to chief selector MSK Prasad, Rahane isn’t out of the running for a spot in the World Cup squad, but his name doesn’t figure in the squads for the last ODI series India play before the IPL, which will be followed immediately by the World Cup.

“It feels good that I am being considered. But at the same time, you need to get a chance,” Rahane said. “Playing the World Cup is a dream every cricketer cherishes. I do respect the selectors and team management’s performances, and I think I deserve a chance.

“I am very much hopeful. I keep negative thoughts away and you never know, things can change any time. It’s important to believe in yourself and keep good people around you rather than those who will say ‘yaar, yeh tere saath ki kyun ho raha hai [Why is this happening only to me?’] I keep my distance from such people and am comfortable with a closed group of four or five people who have believed in me all along.”