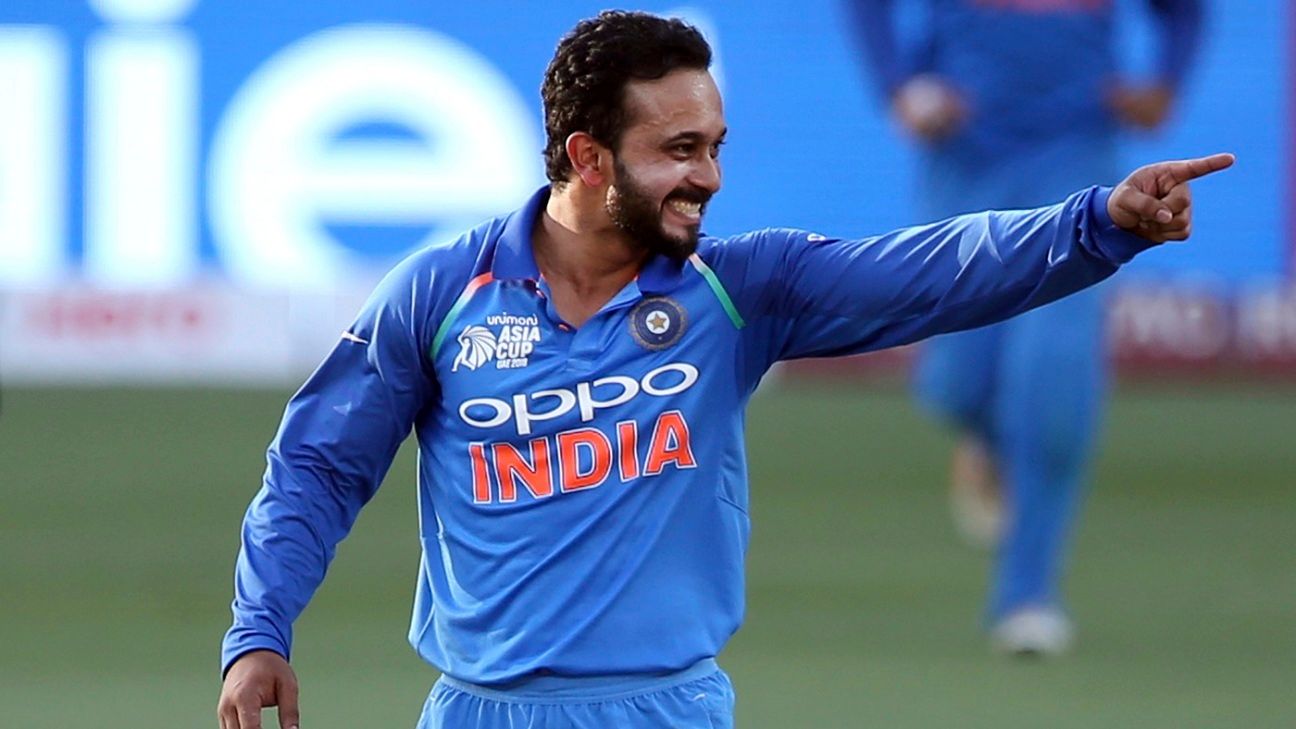 When he made his India debut, Kedar Jadhav was 29 and had considerable domestic experience: 162 matches across first-class, List A and T20 cricket. In those 162 matches, however, he had only bowled 17 times, taking all of eight wickets. The second string he was known for then, in fact, was his occasional wicketkeeping in the IPL.

Somehow, in his time with the India team, Jadhav has turned himself into a regular contributor of overs and wickets, as useful to the side with his round-arm offbreaks as he is with the bat.

Jadhav has usually been India’s third spinning option in ODIs. But on Sunday, in the fifth ODI against New Zealand in Wellington, they only played the one frontline spinner in Yuzvendra Chahal, alongside two quicks in Bhuvneshwar Kumar and Mohammed Shami and two seam-bowling allrounders in Hardik Pandya and Vijay Shankar.

It was a new combination for India, and a new role for Jadhav. He responded brilliantly, conceding only 34 runs in his seven overs and taking the key wicket of Kane Williamson – done in by lack of pace, like so many Jadhav victims – as India defended 252 to win by 35 runs.

Rohit Sharma, India’s stand-in ODI captain, was chuffed with Jadhav’s performance, and said he could play this role in the 2019 World Cup too.

“We want to try all the combinations, whatever is available with us,” Rohit said. “We wanted to try the four seaming options and one spinner, with Kedar being the part-time option there.

“See, if the series was on the line, we would have played with two spinners, probably three seamers, with Kedar being there, but yes, now that we’ve won the series, after the third game, we wanted to try out various combinations which will help us going forward. So that was the idea.

“In the World Cup you’re going to play nine games. Semi-final, final, that’s 11 games. Anything can happen to anyone – injuries, out of form. Keeping those things in mind we wanted to try out every combination that we can have as a team. We tried two spinners, we tried four seamers and one spinner, and then Kedar always gives us the balance of being the second spinner.

“I consider him as a proper spinner because every game, you see, he bowls four-five overs, six overs, seven overs maybe, and gets a wicket as well, at the crucial time. Even today you saw, the wicket of Kane Williamson was a crucial point when he got that wicket, because they were going pretty well at that point, things were looking very easy from a New Zealand perspective.

“He came and broke that partnership and we’ve seen that many a time, he’s done that. He gives that balance also, if we want to play four seamers and one spinner, and Kedar being sort of your second lead spinner.”

Having chosen to bat first, India slipped to 18 for 4 before a partnership of 98 between Ambati Rayudu and Shankar rescued them. Rayudu eventually made 90, and the contributions of Shankar, Jadhav and Pandya in the middle order helped lift India to 252. Rohit said India were aware batting first might be difficult, but they chose to do so in order to challenge themselves.

“I had a look before the toss and we knew that there was some moisture on the pitch which will always be helpful for the fast bowlers initially, first seven to ten overs. So we decided as a team, as a group, that we want to be going and facing those challenges, because it’s important.

“Now that we’ve played the way we played, posted a decent target on the board, that wouldn’t have happened if we would have chased. I thought the wicket also got flatter towards the end, and we knew that to some extent it will be better to bat second, but as a team we wanted to go out there and see how we face those challenges, because come the World Cup, big games, we will be put into those situations, so what then.

“Yes, we lost four wickets up front, there’s a learning there for us as a batting unit, as to how we should be batting when the ball is swinging, when the conditions are not that easy, but again a lot of positives also came out from that.

“The way Rayudu batted – he took his time, stitched a very good partnership with Vijay. I thought Vijay really batted well, although I was a little disappointed that he got out, he should have gotten fifty there, very well deserved, maybe a hundred also – you never know. But he got out unfortunately, but yes, guys now know, come the situation, they know how to do it. The run rate wasn’t that great, the first 30 overs, but we still managed to get 250, which is a big big positive in my opinion.”

Rayudu’s form through the series – he also made a pair of important 40s in the two matches in Mount Maunganui – would have given him a lot of confidence, Rohit said.

“Massive confidence for him to bat in a situation like that when the team is down, 20 for 4, and you’ve got to bail the team out of that situation. With his experience – he’s played a lot of cricket, he’s been around for many years – he used his experience, and again, we have seen, no matter how many wickets you lose, you stitch one good partnership, and things start to look slightly different, a lot better I would say, when you have those kind of partnerships.

“So he used his experience, which is a massive boost for him going forward. Again, I won’t be able to comment about the World Cup, who will be batting at [number] four, it’s not my place to talk about it, but yes, talking about the whole series, how he batted, I think he’ll take a lot of confidence from this series.

“He batted and finished off games in Tauranga when we played there, stitched a good partnership again with MS [Dhoni] and then Dinesh [Karthik], so yeah, he’s looking very good at the moment. I just want him to continue. We’ve got five more games against Australia as well, back home, so if he bats the way he batted [in this series], it will be good for us.”