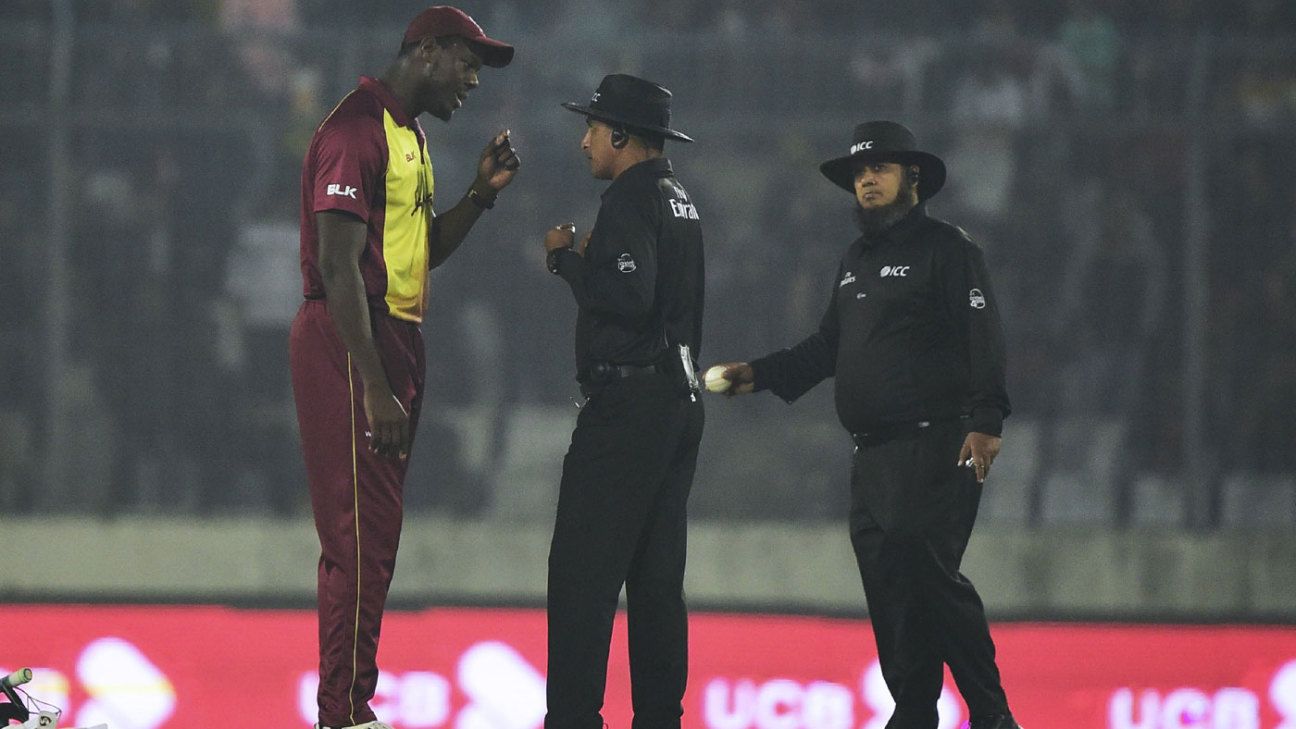 Umpire Tanvir Ahmed, whose erroneous no-ball calls during the third T20I between Bangladesh and West Indies had caused an eight-minute halt in play, has admitted that he had made a mistake.

Off what was supposed to be the final ball of the fourth over of Bangladesh’s chase of 191, Tanvir wrongly pulled up the West Indies fast bowler Oshane Thomas for overstepping. Replays confirmed that Thomas had had some part of his foot behind the line. The incident came minutes after Tanvir had called another erroneous no-ball off Thomas, off the fifth ball of the same over. The free-hits that followed both no-balls were hit for sixes.

The second no-ball call led West Indies captain Carlos Brathwaite to protest against the decision, which held up play for about eight minutes. He spoke to the fourth umpire Sharfuddoula and match referee Jeff Crowe near the boundary line, where he was told that the no-ball couldn’t be reviewed.

Tanvir, who officiated in all three matches of the T20I series – his maiden international assignment – said he had a good track-record as umpire, and that he wasn’t focusing on the backlash he has been facing.

“In terms of a no-ball, there is always the issue of the foot and the line being close to each other,” Tanvir told Prothom Alo. “And if the bowler jumps quickly, there are occasions when it is difficult to spot it. I am new to international cricket, I made a mistake.

“If you look at my past, I don’t have a bad history. It was one mistake. Inshallah, I will come back well. Every person has good days and bad days. Yesterday I had a bad day. The match just ended yesterday. I am not focusing on anything else. I am thinking about my mistake.”

West Indies went on to win the match, but during the post-match press conference, Brathwaite reacted strongly, saying that he was ready to risk sanctions for protesting such on-field calls.

Brathwaite also said he had already had a word with Crowe about other contentious umpiring decisions after the second T20I on Thursday. During that game, umpires Tanvir and Gazi Sohel had given one lbw decision each against West Indies’ batsmen when they had inside-edged the ball onto their pads. West Indies managed to overturn both calls successfully after opting for reviews.

Tanvir is no stranger to on-field controversy. During a Dhaka Premier League List A match in 2016, he had staged a walkout after an argument with Abahani Limited captain Tamim Iqbal over a stumping decision, which resulted in the match getting postponed.