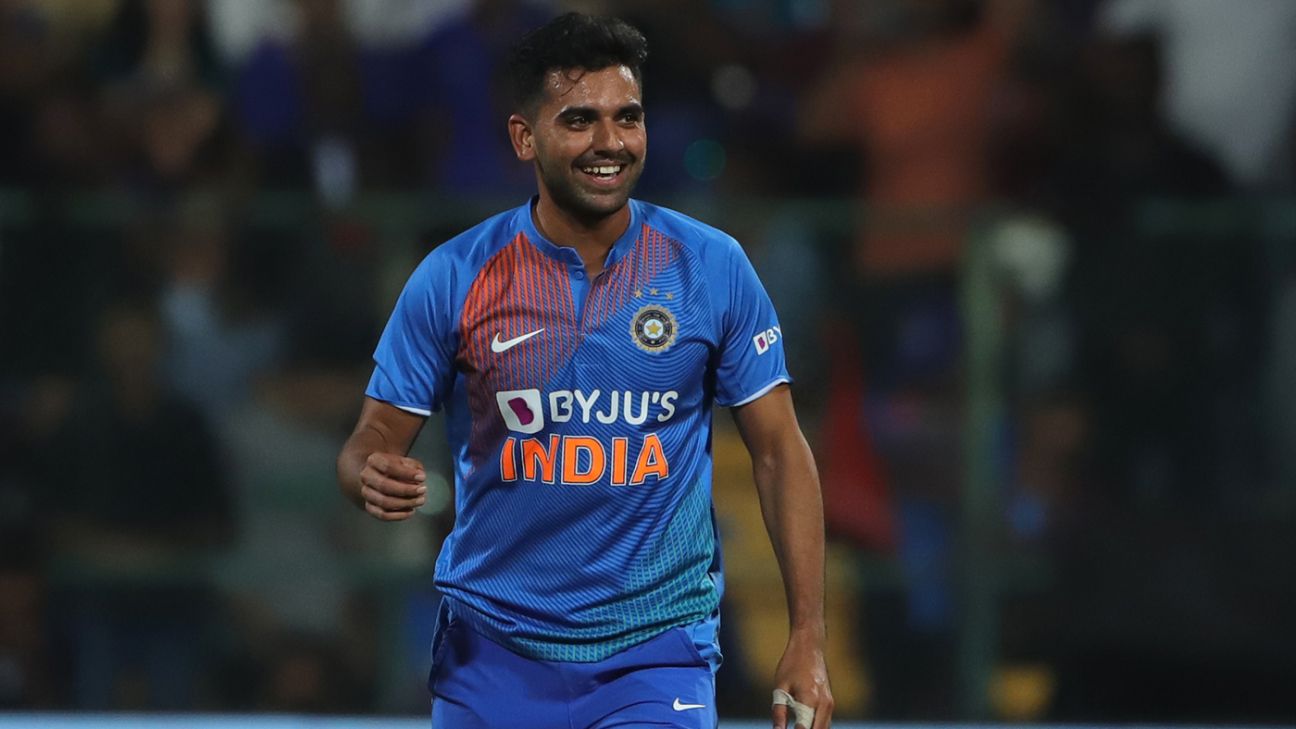 When Deepak Chahar speared in a yorker to dismiss Aminul Islam, he, in one swift action, became the first Indian to complete a T20I hat-trick, collected the best ever figures in a T20I, and sealed a 30-run win against Bangladesh to close out the three-match series.

Despite the presence of dew in Nagpur which negated the effect of Chahar’s primary weapon – swing – he was still more than a handful for the Bangladesh batsmen with his incisive bowling, earning him 14 dots from his 20 deliveries.

2.4 Chahar to Liton Das, OUT, slides across to take a catch! Struck in the air over the leg side but Sundar is near the boundary line and does a split while completing the catch. Was a short ball but he just couldn’t connect with the pull.

2.5 Chahar to Soumya Sarkar, OUT, and another one! As DJ Khaled says. Full and wide outside off, and Sarkar chases it. Drives but it comes off the bat’s toe end and mid-off takes the simplest of catches. Chahar on a hat-trick

12.6 Chahar to Mohammad Mithun, OUT, he’s holed out to long-off. Chahar roars. This was a slower delivery, he backed away to clear the ropes but got the toe-end, simple catch.

17.6 Chahar to Shafiul Islam, OUT, fourth for Chahar as he flat-bats this straight to KL Rahul at long-on. He can’t get easier catches in the outfield than that. Slower bouncer, Shafiul had to force the pace, couldn’t quite get the elevation. The party is just getting started in Nagpur, Rohit and everyone else in the Indian team can breathe easy now.

19.1 Chahar to Mustafizur Rahman, OUT, slapped straight to deep point and that’s a fifth for Chahar. He becomes the fourth Indian to pick up a five-for in T20Is. You’ll look at the replays and say some of those wickets came when batsmen were looking for big shots, but hey, a five-for is a five-for. India one strike away from a series win.

19.2 Chahar to Aminul Islam, OUT, he’s got a hat-trick!! Deepak Chahar has the best figures ever in T20Is. 6 for 7. How incredible is that? You wanted a proper fast bowler’s wicket? There you go, he says. Spears in a yorker, and flattens the off-stump. Just for those in doubt, the hat-trick has been spread across two overs. What a win, India take the series 2-1.