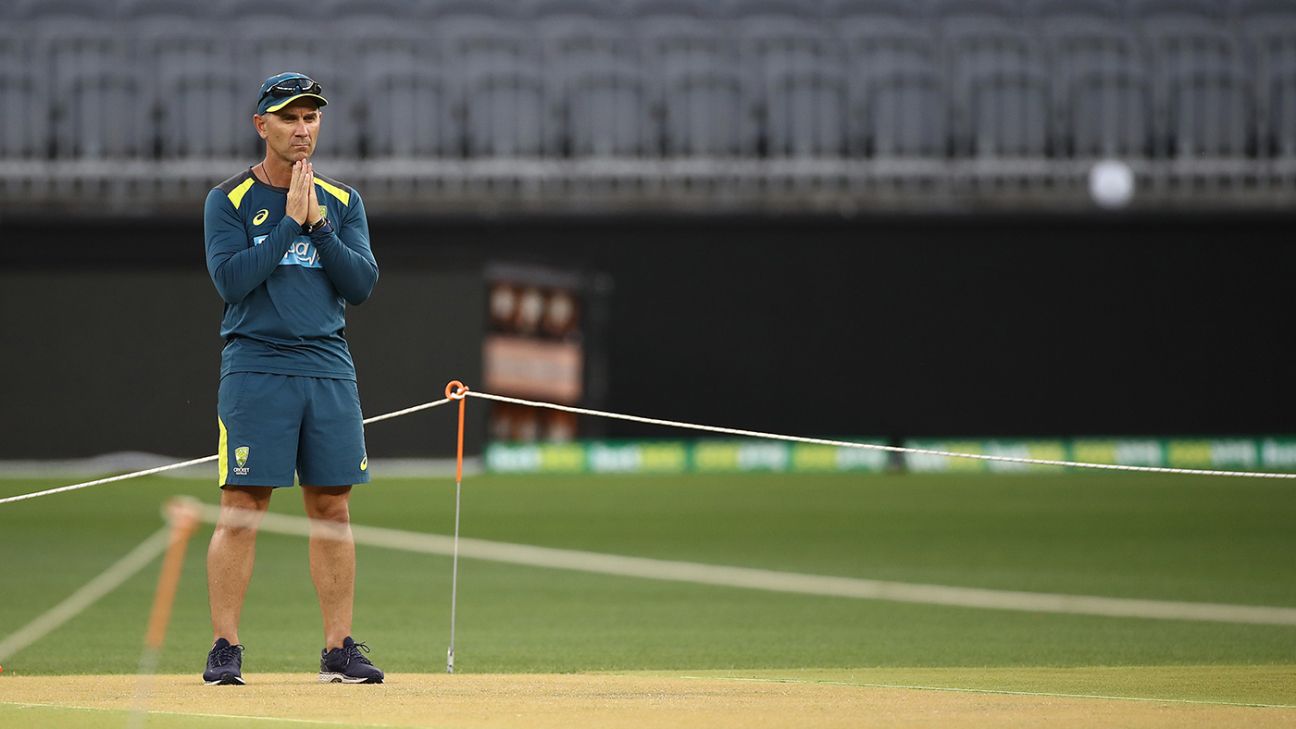 While maybe not the talk of the town, there is plenty of chatter about pitches in Australia. There was the abandonment of the Sheffield Shield game at the MCG and now the intrigue about what will be laid out for the second Test to be staged at the new Perth Stadium. For Australia coach Justin Langer, however, there is just one thing that matters: Test cricket can’t afford flat surfaces.

The scenes at the MCG over the weekend were sparked by a pitch that started too soft when the groundsman, Matt Page, went too far after the ground’s recent problems with lifeless pitches. Langer sympathised with what they were trying to do because he believes the nature of surfaces are the biggest factor in the longer formats.

ALSO READ: NZ brace for ‘most extreme’ Test in Perth

“I see flat pitches as a huge problem for the health of cricket,” he said. “I’ve said this for 10, 15 or 20 years, for the health of Test cricket, first-class cricket and even one-day cricket you want to play on wickets where there’s a contest between bat and ball. It’s been very well documented what happened at the MCG this week, but I know they are trying to push it so they get a contest back because we don’t want to see cricket anywhere in the world, in my opinion, on flat wickets which are batsman-dominated, it’s just not spectacle.

“The pink ball under lights is trying to keep some great life in Test cricket, but the most important thing for me is to get the wickets right so there’s a contest between bat and ball. Hopefully everyone around the world, whether it’s spin, seam, swing, pace and bounce, whatever it is, give the characteristic of giving the bowler some hope because we want spectacle in all cricket, it’s entertainment. We don’t want to see really flat wickets.”

Although it does not give the full picture of Test surfaces, Australia comes out well this decade in terms of the percentage of drawn Tests in the country with the third lowest (16.98%) behind South Africa (12.76%) and England (14.49%) – excluding Zimbabwe and Ireland as host nations. The issues at the MCG aside, Langer does not believe there is a big problem with the pitches produced in Australia.

“We’ve seen [problems] for a few years at the MCG but, I don’t know what the statistics are, but I imagine you get a higher proportion of results here in Australia. I think Australian wickets are going pretty well. There’s a lot of focus on the MCG at the moment because of the last few years of Test cricket, and that’s good that’s happening, because we want to see good wickets. But overall I think the wickets in Australia are excellent.

“What we don’t want to do is go the other way where there’s no chance for a batsman. We’ve got to get the balance right. We don’t want to see wickets that are so green that the game is over in two days. That doesn’t make sense either. But when there’s wickets falling and the best batsmen score runs, that’s great Test cricket or great one-day cricket for me.”

For the next few days, much of the attention will be on how the pitch in Perth plays. The surface made a promising start against India last year although was only rated ‘average’ by the ICC, probably on the basis of some uneven bounce that was on display, which generated a surprised reaction to many who had watched the Test match.

This year the pitch will be baked in hot weather and there is a chance cracks could open up although Langer said they often look worse to the batsman than they really are. The cracks at the WACA became part of cricket folklore, from Tony Greig losing his keys down one to Curtly Ambrose being run out when his bat got stuck to the jagging delivery that bowled James Vince in the 2017-18 Ashes.

“Last year against India, it’s exactly what we’re looking for in Test cricket,” Langer said. “There was a result, it was entertaining cricket. It was fast and bouncy. Obviously the conditions are going to be very hot. Traditionally in Perth when it gets hot you get cracks in the wicket. Having played here for a long time they are usually more psychological than having a physical impact on the game. I’m sure there will be cracks that open up and it’s usually part of the drama that is a contest here in WA. I think it’s going to be a very good wicket. Hopefully there is some pace and bounce, hopefully there is a contest because that’s what we need in Test cricket.”

With Melbourne to come and then this series finishing in Sydney the talk about the 22 yards will not go away. The SCG has had issues of its own – some related to the other sports that use the stadium – and the pitches for the Sheffield Shield have not had much pace but spin, which the ground has historically been famous for assisting, has played a key role.

“It’s pleasing to see we’ve got some unique characteristics to the SCG to an extent again,” New South Wales captain Peter Nevill said. “I thought our last wicket against Western Australia was a fantastic wicket. It’s good to see quality spin and people having to play quality spin. We get criticised enough when we go overseas to the subcontinent [saying] we can’t play spin.

“Unless we’re preparing conditions in Australia that allow you to play two spinners, and this is the only venue around the country you can, people aren’t going to be exposed to that and they’re not going to get any better at playing it. I’d love to see the SCG continue to be a spinning wicket and I think the curator needs to be allowed to do so.”

And it wasn’t just the view of the home captain. “I think that’d be a pretty good deck to roll out for the Test here,” Queensland skipper Usman Khawaja said. “You obviously want it to probably break up a little bit more, but I think that’s more to do with the weather than the wicket. It’s feeling more like the SCG of old, when I started playing.”