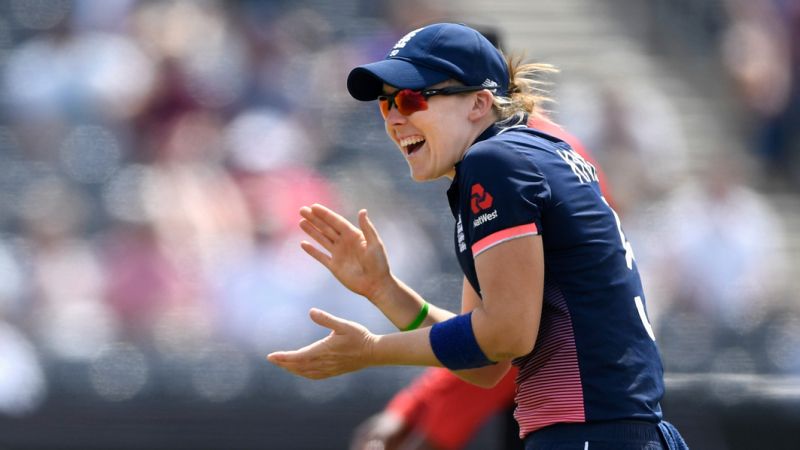 England have more depth than India, a point captain Heather Knight touched upon ahead of the ODI series in Mumbai that counts towards the ICC Women’s Championship.

They have proved it twice against India in recent times – none more famously than in the Women’s World Cup final at Lord’s in July 2017. England triumphed again, in a different format, in the semi-final of the World T20 in November.

“We’ve got a lot of depth,” Knight said on the eve of the first ODI at Wankhede Stadium. “The ODI cricket we’ve played in the last couple of years, including the World Cup in England, has been very good. We have got performances from different players. We have got [some] inexperience [but also] a group that has been around for a while as well.

“We’ve got quite a settled batting line-up and each of the batters in the top six or seven are match-winners. Hopefully a lot more players can step up, as they have done in the last two years.”

By contrast, India are thin in the middle order, as exposed during the limited-overs series in New Zealand (India won the ODIs 2-1, but were blanked 3-0 in the T20Is). They now have a big void to fill as vice-captain Harmanpreet Kaur has been ruled out of the series with an ankle injury. This is the first time since 2010, after 87 ODIs, that India will be without Harmanpreet in the format.

While Knight believes “any team in the world would miss” a batsman of her caliber, Mithali Raj, her counterpart, has suggested it is an opportunity for the younger players to step up.

“Honestly, they should go about their business as they have been, because Jemimah [Rodrigues] and Smriti [Mandhana] gave us great starts in the last series. Our middle-order wasn’t tested much,” Raj said. “Yes, Harman’s not there in the side because of an injury, but we as a bating unit should be taking the responsibility to play that role of getting the team along.

Knight knows India are no pushovers, and is gearing up for a challenge to stifle Mandhana, her WBBL team-mate and India’s most prolific run-scorer in the last 12 months.

“I have obviously played With Smriti in Hobart [Hurricanes], very recently. She played in my team, so I know her very well,” she said. “I know she’s a very good player, and having seen a lot of her, obviously, it gives us the chance to look at her weaknesses as well, and try and figure out how we’re going to exploit them in the series.”

England will be buoyed by the return of wicketkeeper-batsman Sarah Taylor and fast-bowling allrounder Katherine Brunt, two notable absentees from their World T20 squad. Knight, quite obviously, was delighted to have players of their ability and experience available.

“The experience they bring to the side, obviously their skill level to the pitch is invaluable to us,” she said. “We’re really excited to have them back, and see how they go. They are both excited to be here as well. They bring different things to the group. They both really have a positive influence on the team, and the set-up in general.”

Last year, Nagpur offered turning tracks when England toured for three ODIs, which they won 2-1. In Mumbai, the series will be played on two adjacent surfaces – one grassy and the other one on a belter. That said, much of England’s bowling plans will revolve around Sophie Ecclestone, their leading wicket-taker during the ODI series last year. Ecclestone has since been awarded a central contract.

“I think Sophie Ecclestone bowled really well last year in India,” Knight said. “She sort of emerged on that trip, and has been the leader of our attack. She’s been outstanding, and she keeps developing all the time. So I’d really like to see how she goes.”

A key player missing from England’s squad from their last tour of India is the now-retired offspinner Danielle Hazell. Knight was hopeful that Hazell’s like-for-like replacement, Laura Marsh will be able to plug that hole and, in turn, cement her place in the starting XI.

“We miss Danni, but we’ve got a fitting replacement in Laura Marsh,” Knight said. “She’s been around for a long time, experienced in these conditions and how to bowl in these conditions. I’m really excited to see how she goes. She has a good opportunity to be our main offspinner.

“With Danni around, Laura and her were constantly competing against each other – a one in, one out sort of thing. Laura’s now got that chance to be our only offspinner and really stamp her mark on it.”