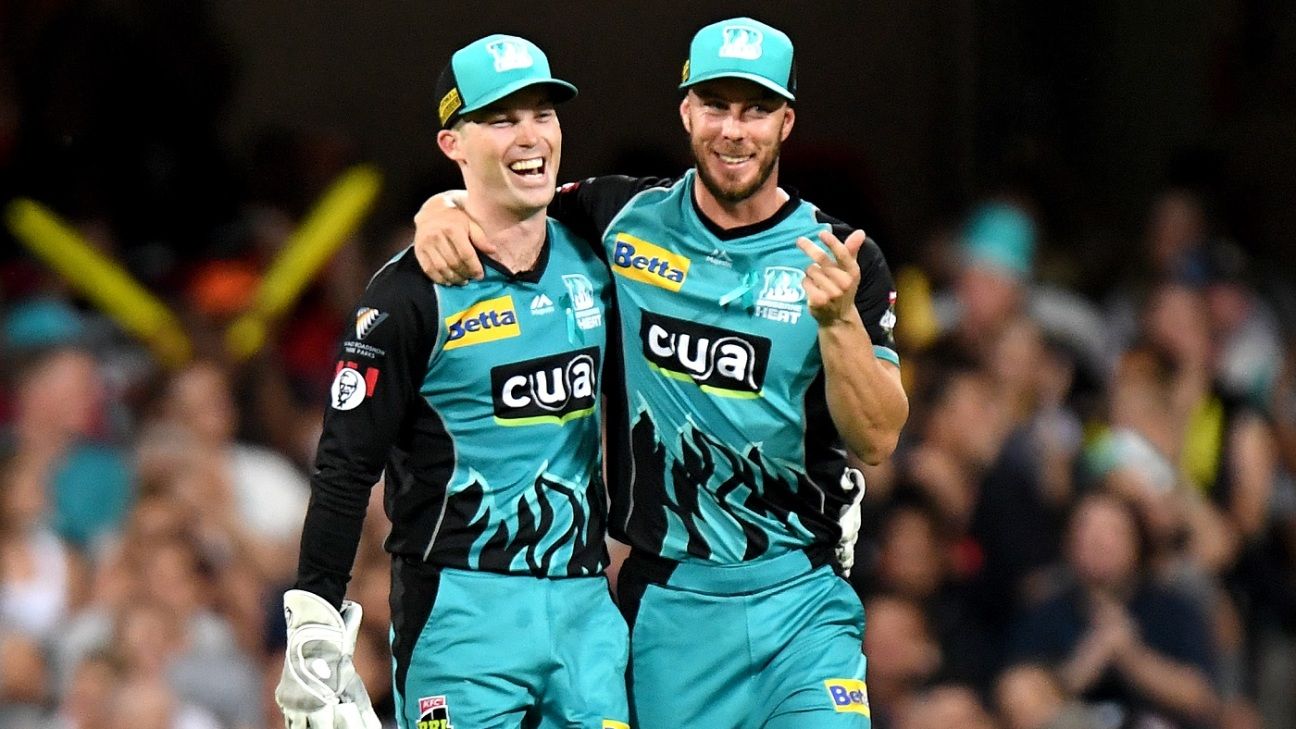 Chris Lynn powered Brisbane Heat’s chase of Perth Scorchers’ lowly 9 for 128 to bookend his team’s overwhelming performance in the field.

The fancied Heat have disappointed this season but crushed an inexperienced Scorchers XI in a clash of the bottom two teams to keep their faint finals hopes alive.

After being sent in, Scorchers’ misfiring batting order succumbed to disciplined Heat bowling to finish with a mediocre total on the batting-friendly Gabba. Mystery spinner Mujeeb ur Rahman bamboozled the out-of-form Scorchers with three top-order wickets as Heat’s spinners shackled the batsmen early, before seamer Josh Lalor’s hat-trick at the death capped it off.

An unbeaten Lynn half-century spearheaded Heat’s easy chase down with 15 balls to spare and end their three-match losing streak.

Another lamentable Scorchers performance was further soured by a hamstring injury to Shaun Marsh, who was unable to field. Having endured a fourth straight defeat in their longest ever losing streak, Scorchers are staring down the barrel of a wooden spoon.

The visitors shook up their top-order with recalled wicketkeeper-batsman Josh Inglis promoted to the top alongside Shaun Marsh in a bid for extra firepower – the seventh opening combination used by Scorchers this season.

The experiment backfired with Marsh falling cheaply in the second over followed shortly by Inglis as Heat’s strategy to use spin through the first five overs worked. Having been routed for just 79 against Renegades last match, Scorchers’ nightmare continued when hard-hitting allrounder Ashton Turner holed out for just two to gift Mujeeb his second wicket.

Once the hottest batsman in the BBL, Turner suffered his fourth straight single digit failure as Scorchers teetered at 3 for 17 after 4 overs. Their hopes of mustering a competitive total rested on captain Mitchell Marsh and Cameron Bancroft, who looked in sparkling touch and relished Heat’s change to pace by smashing three boundaries off Lalor.

They successfully counterattacked in a quick 42-run partnership before Mitchell Marsh rashly fell to Ben Cutting’s first delivery in the 10th over and then Bancroft was bowled by a quick Mujeeb delivery to leave Scorchers once again in a major hole.

With the lowest scoring rate among teams in the BBL, Scorchers’ inability to counterattack has been cruelly exposed during a disastrous campaign. Youngster Nick Hobson, who impressed amid the carnage against Renegades, showed maturity to upstage his more senior teammates but struggled to strike boundaries against Heat’s disciplined bowling.

Hobson combined with debutant Clint Hinchliffe in a sensible partnership marked by hard-run singles and twos more reminiscent of the middle overs of ODI cricket.

An increasingly confident Hobson stunningly smoked a slow delivery from Jack Prestwidge over long on for the only six in the innings. He was unable to cap off a fine innings when he holed out in the final over to complete a surprise hat-trick by Lalor spread out over two overs.

Heat players sedately celebrated the wicket unaware that Lalor had become just the fourth player ever in the BBL to conjure the feat. Lalor only realised his achievement when told by a beaming Alex Ross who had heard from the ground’s announcer.

Much like Scorchers, Heat decided to experiment with a new opening combination of Cutting and Max Bryant who seemingly was caught behind on six after nicking a wide Jason Behrendorff delivery only to be given not out.

It was a golden opportunity for the struggling Cutting to end a drought and he played against type in a defensive start. After failing to score off his first six deliveries, Cutting finally lashed out with three consecutive boundaries before succumbing to the spin of Usman Qadir.

Hinchliffe, whose left-arm wrist spin has drawn comparisons to Scorchers great Brad Hogg, had a disastrous start to his BBL career with a full toss promptly smashed to the boundary by Lynn.

The Heat captain, who had only reached double figures once in his past five hits, was in a belligerent mood and became the highest ever BBL run-scorer when he smashed Andrew Tye for six in the 10th over.

There was some joy for Scorchers when Hinchliffe claimed his first wicket with the scalp of Bryant but they were never seriously in the hunt despite Brendon McCullum’s frustrating season continuing when bowled for three.

After not being picked in Australia’s Test team, Matthew Renshaw hoped to showcase his talents but made just 15. Lynn, however, survived a contentious caught behind appeal off the luckless Behrendorff when on 44 before fittingly sealing the deal with his fourth six to ensure the Heat faithful went home happy in a rarity this season.