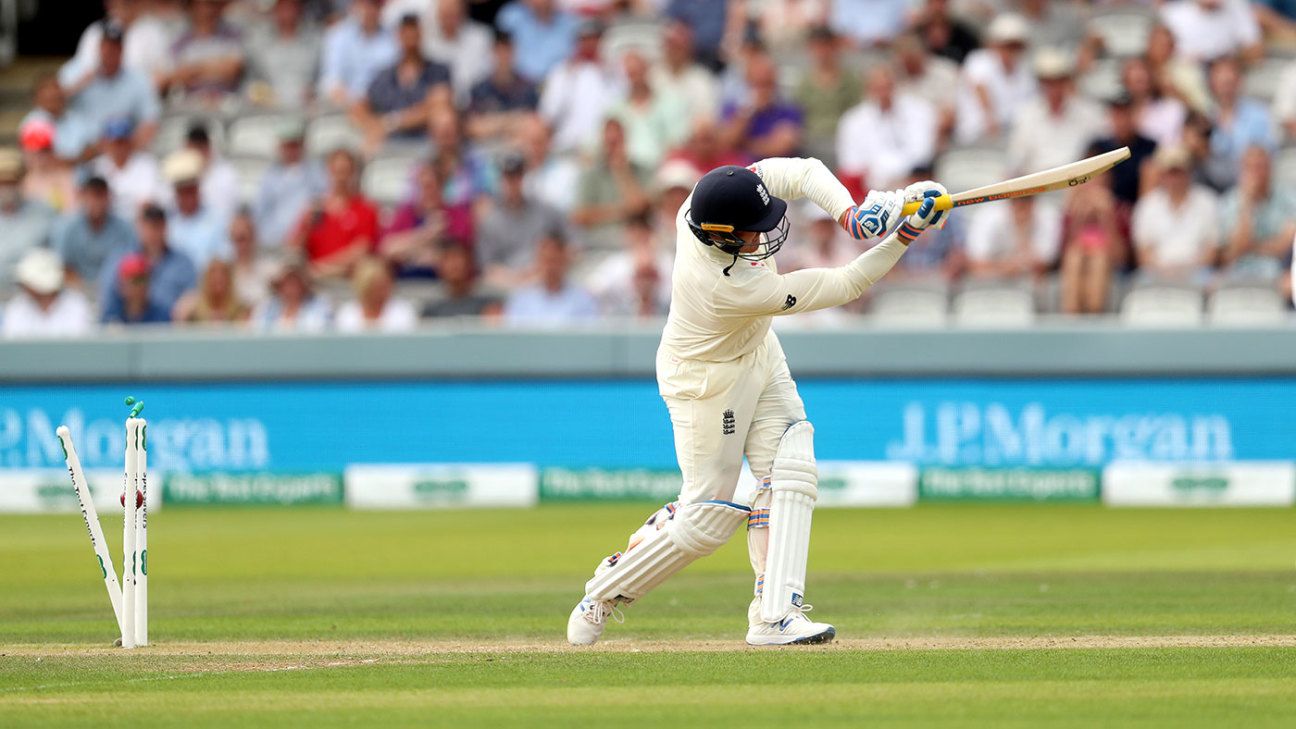 Josh Hazlewood has declared that Aaron Finch’s recent struggles to convert an aggressive ODI game into Test match runs should raise questions about how well Jason Roy might be able to adapt to a similar role change at the top of the order for England during the Ashes series starting this week in Birmingham.

Having dominated as an opener in England’s World Cup winning campaign, Roy was parachuted into Joe Root’s Test squad for the Ashes, and made 72 in the second innings on debut against Ireland at Lord’s. England selector Ed Smith has remarked that Roy is now a more complete player than ever. But Hazlewood had little hesitation wondering aloud whether Roy, who is a middle order batsman for Surrey when he turns out for his county side, was capable of doing the job in Tests.

“We’ll see how Roy goes in Test cricket. He’s has only played one Test match and it’s a lot different opening the batting in a Test than a one-day game, that’s for sure,” Hazlewood said. “In England, opening is probably the toughest place to bat which probably made Alastair Cook’s record all the better. To play attacking cricket in those conditions is tough.

“Aaron Finch found it tough last summer against a quality India attack on wickets that didn’t do too much to be honest. I think he found it a big step up to be honest. He found the ball swung and seamed around and the wickets were a lot different to a one-day wicket. He’d played a lot of his four-day cricket at five or six and I think Roy is the same at Surrey. It’s hard to bat five at a level below and then open in Test cricket. We’ll see.”

Finch’s experience, after a promising start against Pakistan in the UAE, was to be worn down by the diligence and skill of Jasprit Bumrah. Hazlewood was conscious too that the Australians had the opportunity to make early inroads at Edgbaston to build mental hurdles for the hosts that only compound over five matches, much as Moeen Ali was cornered by Nathan Lyon across the 2017-18 series down under.

“Absolutely, we’ve had some [experience] I guess, with Nathan Lyon with Moeen in Australia,” Hazlewood said. “If you can really build the pressure on one guy and get him early in the first Test especially, you can sort of create that doubt in that mind and get the upper hand and just keep driving that in as the series goes on. This is the only team we play in a five-Test series so it’s a little bit different than others, but definitely that’s key.

“Their top order is under a little bit of pressure probably, with just the fact they haven’t played that much Test cricket. The more we can put them under pressure early and get stuck into that middle order when the ball is nice and hard and new, that’s great.”

David Saker, the former bowling coach of both Australia and England, noted this week that while he loved working with Hazlewood, it was true that the New South Welshman can tend to pitch too short. The Australians have been thinking for some months, dating back to the time before Saker resigned in late January, that a balance between hitting the stumps and not floating up the swinging ball too gently would be critical to an Ashes win.

“I’ve spoken a lot to Sakes over the last few years about bowling in England,” Hazlewood said. “I think the main thing is I think English batsmen play swing bowling really well, they’re used to it. They play it all the time. So he really focused on more the seam aspect and bowling a scrambled seam or whatever it is, how you’re going to get the ball to move off the wicket.

“The length is key with that. I think I tended to bowl a bit full last time. Seeing it swing you get quite greedy and might go a touch full and get driven. We’ve spoken a lot about it on the Australia A tour, James Pattinson especially. Just hitting that right length. He said the same thing, he thinks seam is the way to go. It’s great if you can do both and I feel pretty comfortable with where I am at now.”

As for how Hazlewood sees his own role, he admitted that a series in which he played three or four Tests would be reasonable, in acknowledgement that a deep and adaptable Australian bowling group could be quite effectively rotated over the course of five tightly packed matches. “I think it would be a very good effort to play all five, especially with my last two years, I’ve missed a few Tests with injury,” he said. “I’d be really happy with four, three or four even. It’s such a tight schedule.

“Five would be great if we got away with a couple of cheap innings, bowling 30 (overs) for the Test or something like that, it’d be great. We’ll play it by ear and see how we go. I guess, just with how tight the scheduling is, it’s probably the tightest we’ve seen the five-Test series and a couple of tour games thrown in there as well … I think the guys are happy to play it by ear a little bit, obviously depending on how much we bowl per Test.

“You can’t look too far ahead I think. You can map certain things out if things happen but you’ve got to play it by ear I think with Test cricket. You might get away with a Test with 30 overs under your belt which is fine. It’s when it goes up to 45 to 50 that you start to reassess things and look at different options. There’s six quicks here, which is great, so more than happy to rotate or conditions based picking those bowlers, we’ll see how we go.”