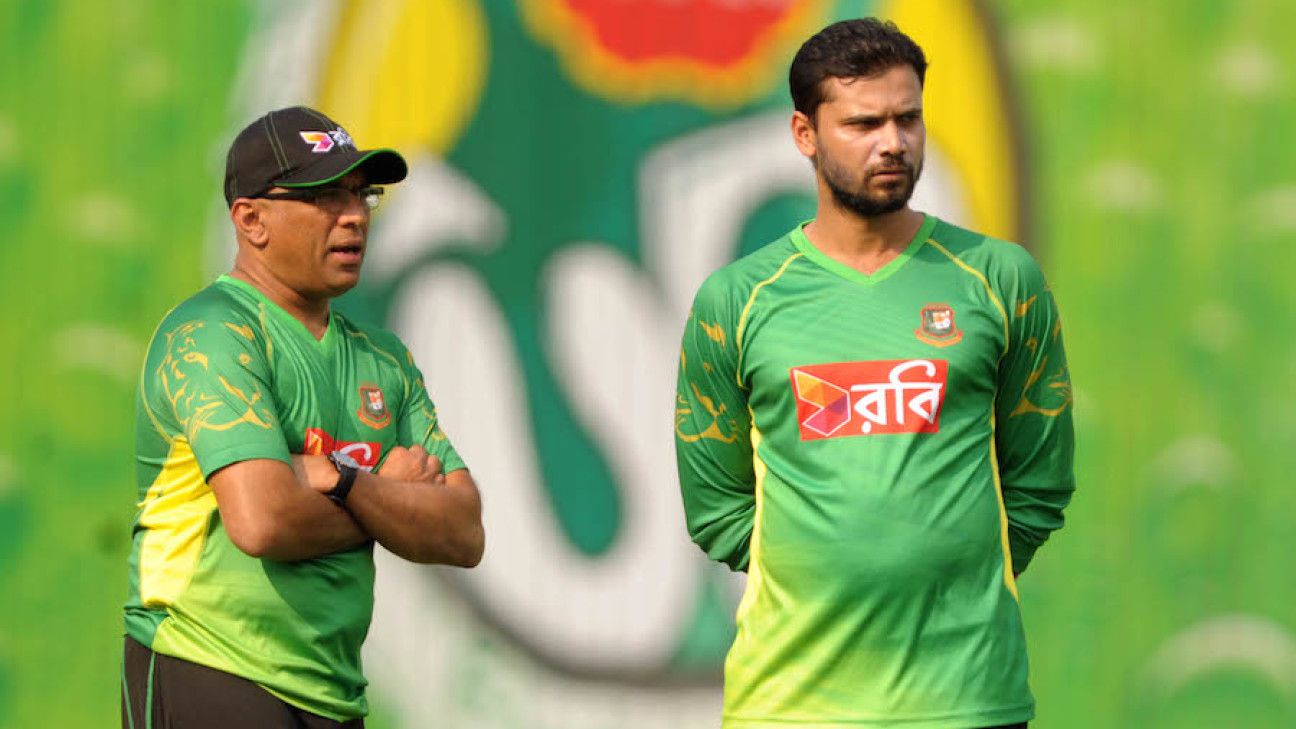 Chandika Hathurusingha‘s return as Bangladesh’s head coach is closer to becoming reality after Nazmul Hassan, the Bangladesh Cricket Board president, said he could become a candidate for the job after the Sri Lanka-Bangladesh ODI series. Khaled Mahmud will be the coach of the team in an interim capacity for the Sri Lanka series, after Bangladesh parted ways with Steve Rhodes at the end of their World Cup campaign.

Hathurusingha had been Bangladesh coach between 2014 and 2017, and the only thing that seemingly stands in the way of his return to that position is the manner of his exit from the Sri Lanka set-up, which remains unclear. Hassan, one of Hathurusingha’s biggest supporters during his Bangladesh stint, said the BCB is unable to talk to Hathurusingha and some of their other candidates right now, as they are involved in their current jobs. The BCB president also said the board would prefer a coach with previous experience of working with a subcontinent team.

“We have started the process to find a head coach, a fast-bowling coach and a physio,” Hassan said. “Since the ODI series is about to begin, we are not allowed to talk to Hathurusingha. He will become a candidate when there’s a break after this series, if he expresses his wish to come. We want a coach as soon as possible. We are in talks but some of the coaches are still involved in their present jobs.

“My first preference is that the coach must have national team coaching experience. We are also looking for someone who has previous experience with subcontinent teams. We are looking for coaches outside those who applied [for the coaching position] too. Top coaches have to be contacted through agents, so we are pretty much using all our avenues.”

Hathurusingha still has around 16 months to go in his contract with Sri Lanka Cricket, the early termination of which is understood to come with a hefty severance package. Last week matters came closer to a resolution, when Sri Lanka’s Sports Ministry handed SLC a written directive demanding the resignation of the national team’s coaching staff.

SLC CEO Ashley De Silva was tightlipped on the matter, simply stating that the board would have to comply with any directive by the sports ministry, as per Sri Lanka’s sports law.

“We have to abide by the sports law, and when the sports minister gives a directive we’re compelled to abide by those directives,” De Silva told ESPNcricinfo. “So this is something we’re looking at, we’ve had discussions about it internally, and our executive committee will need to have a discussion with the minister about how to proceed and take it forward from there.

“We know there will be a lot of speculation until then, but since it’s a very sensitive area we don’t want to make a statement until a final decision has been made. We don’t know if Hathurusingha is okay with resigning, we’ll only know after we speak to him. He’s aware of the current situation, but we haven’t had a discussion with him as yet, so we just have to wait and see.”

When questioned on the matter earlier this week, Hathurusingha kept his cards close to his chest. “As far as I am concerned, I haven’t heard from anybody relevant to me that there’s going to be a change in the coaching staff,” he stated on Monday. “I have to just wait for what they’re going to tell me and then I will make my decision.”

Hathurusingha remains a favourite for the BCB president Hassan, though, who said that he likes coaches who have a win-at-all-cost attitude. “Everyone has a different coaching technique, style and thinking. We also have a thinking. I don’t want to say much but some coaches feel that there’s no point being serious about a game. But we also had coaches who wanted to win at any cost,” said Hassan, who also came down heavily on Rhodes’ tenure.

Hassan alleged that Rhodes did not seem serious enough about winning as a coach, did not push the players hard during a pre-World Cup preparation camp in Leicester, and was not involved in strategic matters.

“We arranged for a practice camp before the World Cup, but nobody came. There was a cultural mismatch. He assumed that every player will practice on their own, but since our players heard it was optional, no one turned up. So there was no use making all that arrangement spending so much money.

“I saw the changes [in the style of coaching] when I was in Dubai for the Asia Cup final. We saw that things have changed. We waited. The players have told me continuously – after the New Zealand tour and also during the World Cup – that they don’t get to speak to the coach.

“He only lands in the team meeting on the day before the game. He doesn’t talk about strategy. He is just there. This is what the players have told me. I am telling you after listening to everyone. I never had a direct interaction. But from what I have seen, I felt that he doesn’t match with us.”

Hassan believed that a five-day break for the team during their World Cup campaign -in the eight-day gap between their matches against Afghanistan and India – affected the concentration of the players, even though the team had been given a break to freshen up. He claimed that players had gone to Europe and expressed his surprise that nobody had informed him or the board directors Akram Khan (present with the World Cup squad as cricket operations chairman) and Khaled Mahmud (team manager) of the break. However, the players had been informed of the break by the team management, led by Mahmud. and none of them visited Europe.

“There was a five-day holiday before the India game,” Hassan said. “There’s a difference between giving rest and a break. Everyone had left, so it broke their concentration. Maybe it is fine in their culture, but we feel that it doesn’t match with our culture.

“Ahead of matches against two tough opponents, how does it feel to know that your players have gone to Europe? It is not acceptable. I don’t care what anyone is saying. I don’t think it was the right decision. You can give rest for two or three days. Their eyes and face should have said that they were thinking about the World Cup, the next two games. They haven’t matured as cricketers to come back from this type of break.

“The biggest surprise was that I didn’t know that the team was on holiday. It hasn’t happened before. This was definitely a lapse but I am not singling out anyone. We had Akram [Khan] and [Khaled Mahmud] Sujon who were there but they also didn’t know. They heard about it after the break was given, so how did it benefit us?

Hassan claimed that captain Mashrafe Mortaza and wicketkeeper Mushfiqur Rahim were added to the squad on the morning of the team’s last World Cup match against Pakistan, despite being injured.

“The night before the Pakistan game, I was with the players till 11.30pm. Mushfiq, with his hand in a sling, was telling me that he couldn’t move his hand,” Hassan said. “He was not in the squad. Mashrafe didn’t practice the day before, and neither did he attend strategy meetings. He was also out of that game. These are just two examples.

“We had fixed the squad in the presence of the coach and everyone. But the next day we saw another team playing the game. These things haven’t happened in the past. This is definitely a problem. We have decided that it won’t work like this. We are not saying he is not good but the way the team was running, it was totally different from our thinking.”

Rhodes did not respond to ESPNcricinfo when contacted about these allegations.