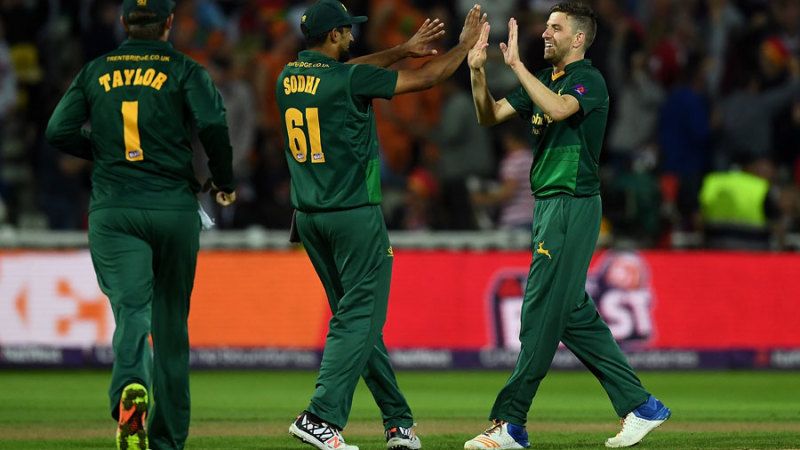 Players’ attitudes to following the IPL auction have always been varied. Some watch the whole thing unfold on TV, desperate to find out who is going where and who might be joining them. Plenty more will follow it on Twitter, or wait for the call from their agent to find out if they’ve been successful.

For Harry Gurney, the experience was stranger than most. “It’s my wedding anniversary tomorrow, so my wife and I are on our way to a night away without our little baby to celebrate at a nice hotel,” he said

“We drove over to drop little Arthur at his grandma’s house, which is 20 minutes from home, but when we got there I realised I’d forgotten something. I had to drive all the way home and get it.

“I arrived back, walked into the kitchen, and my wife stood there and said: ‘You’ve been sold!’ I was ecstatic – my phone’s gone berserk with calls, texts, WhatsApps, Twitter notifications and all that.”

On a day when Eoin Morgan, Alex Hales and Chris Woakes went unsold, Gurney’s 75 lakh (approx. USD 105,000) deal with Kolkata Knight Riders may have raised a few eyebrows for those that remember him for an underwhelming stint in England’s ODI team back in 2014.

One obvious advantage that Gurney has over that trio is that he is not part of England’s World Cup plans, meaning he will be available for the duration of the tournament; the same factor was no doubt in owners’ minds during the bidding war for Sam Curran, which saw him fetch a 7.2 crore (approx. USD 1m) price with Kings XI Punjab.

But among the number-crunching fraternity, it was no surprise to see Gurney sell. Since his move away from the England set-up, he has been the standout seam bowler in English T20 cricket.

His whirly left-arm action may look ungainly, but few county batsmen will question its effectiveness: he has 58 wickets and an economy rate of 7.63 over the last three seasons, exceptional figures for a man who bowls almost exclusively in the Powerplay and at the death.

Add in the fact that he plays half his games on the best batting pitch in England at Trent Bridge and it is easy to see why Gurney has caught the eye of franchises around the world this winter.

He will arrive at the IPL after stints with Melbourne Renegades and Quetta Gladiators, and his excitement at a chance to show off his talent on the world stage is palpable.

“Everyone I know who has been to the IPL talks about how big, how huge the whole thing is,” he said. “It’s undoubtedly the biggest T20 competition in the world, and arguably the pinnacle of the T20 game.

“I feel like I’m getting towards the point where – other than Test cricket – I’ve ticked off most of the things you can achieve in the game of cricket, which is just so humbling.”

Whether or not a strong set of performances can help him return to the international reckoning remains to be seen. Last month, Gurney told ESPNCricinfo that “breaking into the franchise scene is more on my radar” than winning an England recall.

“If I end up pulling on an England shirt again in the T20 format then that’d be a fantastic offshoot of the main target,” he said, “but I want to get into franchise cricket, give a good impression, and hopefully keep doing that for a few years.”

Gurney knows that there is no guarantee he’ll be playing every game of the IPL season. In Chris Lynn, Sunil Narine, and Andre Russell, KKR have three of the best overseas players in the competition, and competition for the fourth spot will be fierce – Anrich Nortje, Lockie Ferguson and Carlos Brathwaite will likely be competing to fill that berth.

“It’s an opportunity to learn and to broaden my horizons, I guess. It’s a long competition, and there are always injuries or loss of form in professional sport, so I’d back myself to have a chance to make a real impact at some point.

“I’ve got an opportunity to push my case before I get out there at the BBL and the PSL. Let’s hope I can take my chance.”