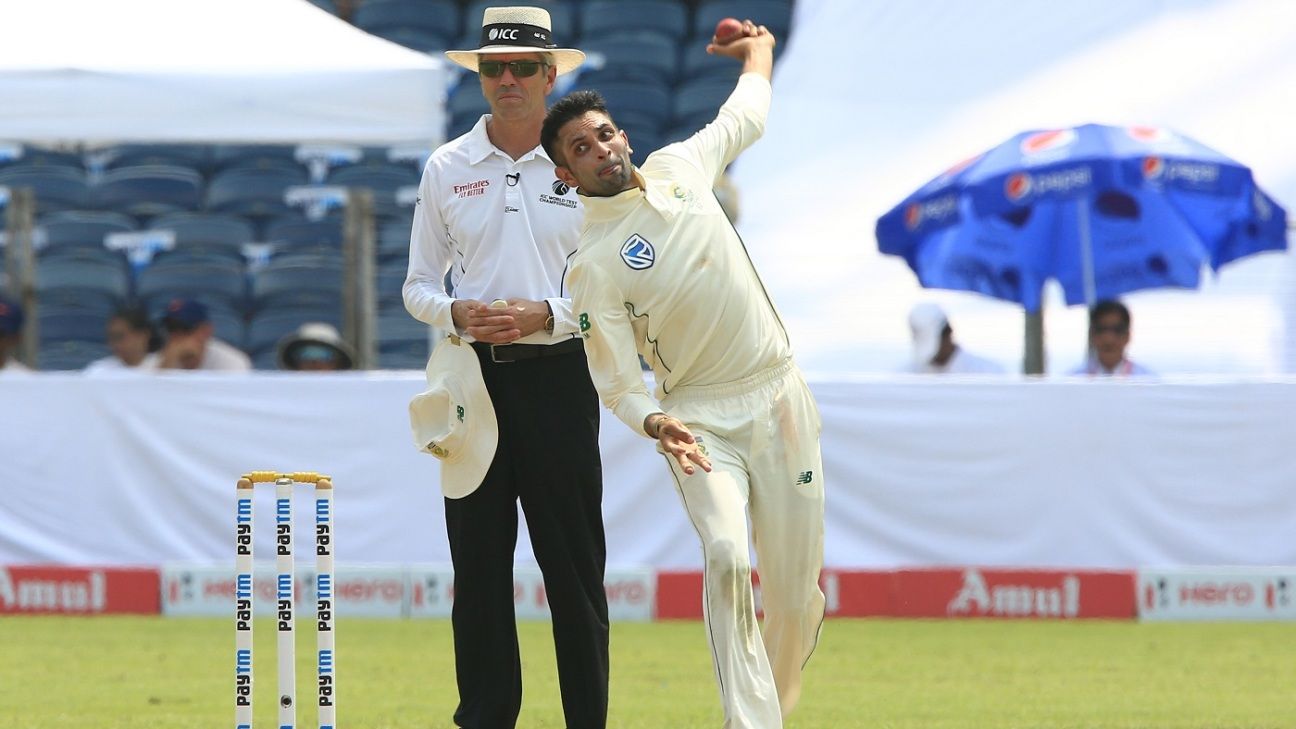 There is someone in the South Africa set-up who needs the team to produce big first-innings runs and it is not who you might immediately think. It’s not the trio of experienced batsmen, Dean Elgar, Faf du Plessis and Quinton de Kock, who all played reckless shots at Newlands, and it’s not the younger three, Pieter Malan, Zubayr Hamza and Rassie van der Dussen, who are all trying to secure their places for the foreseeable future. It is Keshav Maharaj, who is waiting for an opportunity to make an impact on the ongoing series against England.

“Without a good first innings total, it’s difficult for a spinner to really get stuck in,” Paul Harris, who has been working as South Africa’s spin consultant in the Mark Boucher era, said. “As a spinner, you need the batsmen to stand up so you can bowl to more attacking fields and have a more aggressive mindset.”

Look no further than the first two matches of the series for proof. At SuperSport Park, South Africa had a 103-run first-innings lead and controlled large parts of the game. That allowed Maharaj to be kept on even after England tried to take him on in the second innings and it resulted in the all-important wicket of Ben Stokes.

At Newlands, however, South Africa were 46 runs behind in the first innings and playing catch-up for the rest of the match. While Maharaj had been used to hold an end and allow the quicks to rotate from the other in the first innings, in the second his role was unclear, as captain du Plessis struggled to contain England and his quicks were unable to make inroads. As a result, Maharaj was South Africa’s most expensive bowler in that innings and Boucher later called him a “work in progress”.

Given that Maharaj has been a mainstay in the Test team since he made his debut in November 2016, it seemed an unusual way for Boucher to describe him. He is South Africa’s second-most successful spinner since readmission, and overall only Aubrey Faulkner has a better strike rate (minimum 40 wickets). Most players will say they never stop learning and those of the bashfulness of Maharaj are unlikely to ever consider themselves the finished article but Boucher’s description would have been more apt for a junior member of the squad, especially at such a politically sensitive time in South African cricket.

Lest we forget, there is an undercurrent of suspicion from quarters such as the Black African Cricket Clubs and on social media that Boucher and co are whitewashing the game after the Africanisation of the previous administration. Those fears won’t be helped by Boucher’s paternalistic choice of words when it comes to Maharaj or Harris’ involvement. Like batting consultant Jacques Kallis, Harris is a personal friend of Boucher’s.

However, it is worth knowing that he has been mentoring Maharaj for a prolonged period of time, mostly over the telephone, after Maharaj approached him several summers ago. Harris and Maharaj had planned to meet up before but were unable to coordinate schedules until recently. Harris still has a full-time job and is only employed on a consultancy basis.

“We’ve worked on getting him closer to the stumps and bowling more wicket-to-wicket, rather than from wider. If you bowl from wider, the ball has got to turn quite a lot to catch the outside edge,” Harris said. “And we’ve also worked on getting his front arm higher, because sometimes it drops and then he bowls a little shorter. I could definitely see the improvement in Cape Town.”

Maharaj’s figures may not immediately reveal that but Harris hopes the results will come in Port Elizabeth, South Africa’s slowest surface and the most likely to take turn. “We’re expecting it to play more in his favour than other wickets. In South Africa conditions are generally not suited to spinners, which presents its own challenges.”

South African spinners are used to playing second fiddle to the seamers, and usually operate on green tops which limits their role to a containing one for the bulk of their careers. That means they have to get used to doing the donkey work, something Maharaj has never shied away from. “He is a hard worker and he can bowl long spells,” Harris said. “He takes it seriously and he wants to improve and if he can get 10-20% better than what he is, why not?”

Importantly, Maharaj knows he has to keep getting better because there are several others nipping at his heels. Three of the top five first-class bowlers in South Africa are spinners and one a recent debutant: George Linde, who was capped in India, currently tops the domestic wicket-takers’ chart, Jon-Jon Smuts is third and offspinner Prenelen Subrayen is fifth, all of whom Harris hopes will push Maharaj to stay a step ahead of the rest. “It’s sometimes harder to keep your spot than it was to get into the side because you always have a target on your back,” Harris said. “It’s good to have that and I don’t think it will negatively affect Keshav.”