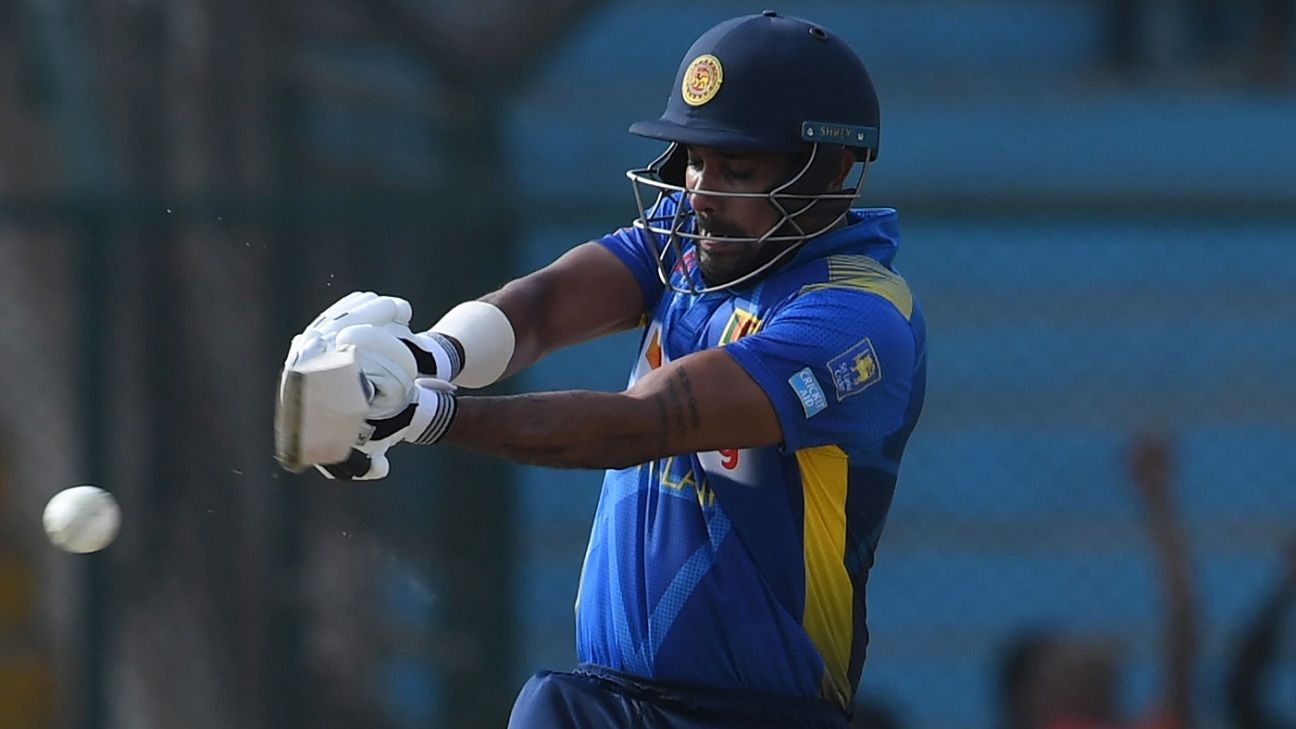 Less than 15 months ago, Danushka Gunathilaka found himself banned from all forms of cricket, further action pending following the results of a Sri Lankan police inquiry. He had been suspended for breaching curfew during the middle of a Test, but far more gravely, the offence was linked to an incident of alleged sexual assault by an individual known to the batsman. While he was cleared of any criminal wrongdoing, the incident saw him earn a harsh reprimand from his then-captain Angelo Mathews, who declared no indiscipline would be tolerated.

It was only the latest disciplinary scrape Gunathilaka got into, and he was banned for half a dozen games. It wasn’t yet clear how much longer he would stay out of contention for the national team; occurrences like these can have career-altering implications. He was, to put it mildly, emphatically not in control.

Those were matters off the field, and to get a sense of why Sri Lanka Cricket has arguably treated him with kid gloves for so long, you really need to watch him on it. Back into the team for a tour that saw his entry eased by the withdrawal of several first-choice players, Gunathilaka put on a show that emphasised control above all else.

Dealing with the triple-left arm threat of Pakistan’s pacemen, he wouldn’t let himself be intimidated; he was never more ruthless than in dealing with the short ball. His control percentage for short deliveries bounced at him from Mohammad Amir, Usman Shinwari and Wahab Riaz was a spotless 100%. He began with a flick to fine leg off the first ball from Shinwari, a second boundary would be had courtesy a back-foot punch through the covers. Amir bowled just one short ball to him all innings, only to see the batsman swivel across and help it behind fine leg. He wouldn’t try that length to Gunathilaka all innings again.

The other quicks found the short stuff just as ineffective against him. Nine balls around that length produced 13 runs with two boundaries, with the spinners finding it just as hard to work him out. Pakistan’s two lead spinners, Shadab Khan and Mohammad Nawaz, conceded a combined 44 runs in 39 balls against him. He was in control for all but three of those balls – 92.3%. Across the 134 balls he faced for his 133, his control percentage registered at 88.7.

“I think it was a good century for me, and I take a lot of positives from that knock,” Gunathilaka said. “I’m sure this’ll help me in the future. It comes right after my injury, which has kept me from playing any international game for the past five months. This was a good opportunity for me and I think I did really well. I was happy I was able to showcase my skills, and hopefully I can do this consistently now.”

However, it isn’t numbers that have seen Gunathilaka work his way back into the team after breaking curfew in the middle of a Test match and risking opening himself up to a police inquiry. It isn’t his control percentage that won him back a place on the team after turning up to training without his gear.

It was the manner in which he began that presumably has had SLC continue to invest in him. He asserted his authority on the game with those two boundaries in the first over, and finding four further exquisite ones before the field would spread out. Not that that mattered, though, as a reverse sweep in the 15th over indicated the boundaries would keep coming despite Pakistan’s best-laid plans. There was no telling where they’d go – his wagon wheel would reveal no cranny of the ground had gone unexplored – and the elegance of the shot-making would be the only predictable point of a relentless onslaught.

When Nawaz dropped it short, Gunathilaka rocked back and slashed a beautifully timed square cut to the boundary. When he went full, he saw him charge and dispatch him back over his head. Even the slog was so brimful of easy power it looked sexy. When Wahab – who had the sort of day confirmation bias tends to set aside while he’s out of the team – went full and fast, Gunathilaka would clear his front leg, and, moments later, wide long-on with devastating efficiency. Wahab would try again. This time he went wider while keeping the same full length, as if Gunathilaka hadn’t spent all afternoon gloriously driving through the covers right in front of the Majid Khan enclosure. Parallels don’t come much sweeter than that.

The flamboyance was shelved as he approached the hundred, a pragmatic single to the on side bringing up just his second ODI century, another indicator of unfulfilled potential. This tour, after all, has been all about getting the job done, and for a change, the tables had been turned. Repeatedly spurned by Sri Lanka for one reason or another, this was a tour the board needed its players to sign up to, and Gunathilaka, having played no international cricket since January, saw yet another opportunity to return.

There’s little point claiming this must be a turning point – how can one possibly know? – and if history is any indicator, the road to redemption is rarely without its bumps. But on a day when Pakistan recalled two of their own problem children back into their T20I side, here was a reminder of why these men are able to walk back into their jobs after slip-ups that would see them sent packing in just about any other profession. Karachi cricket fans don’t have a reputation for applauding elegance as much as effectiveness, but for a few hours, he had them marvelling the art as much as the craft.

It was almost midnight when he left the post-match press conference. This was a curfew Sri Lanka were quite happy letting him breach.