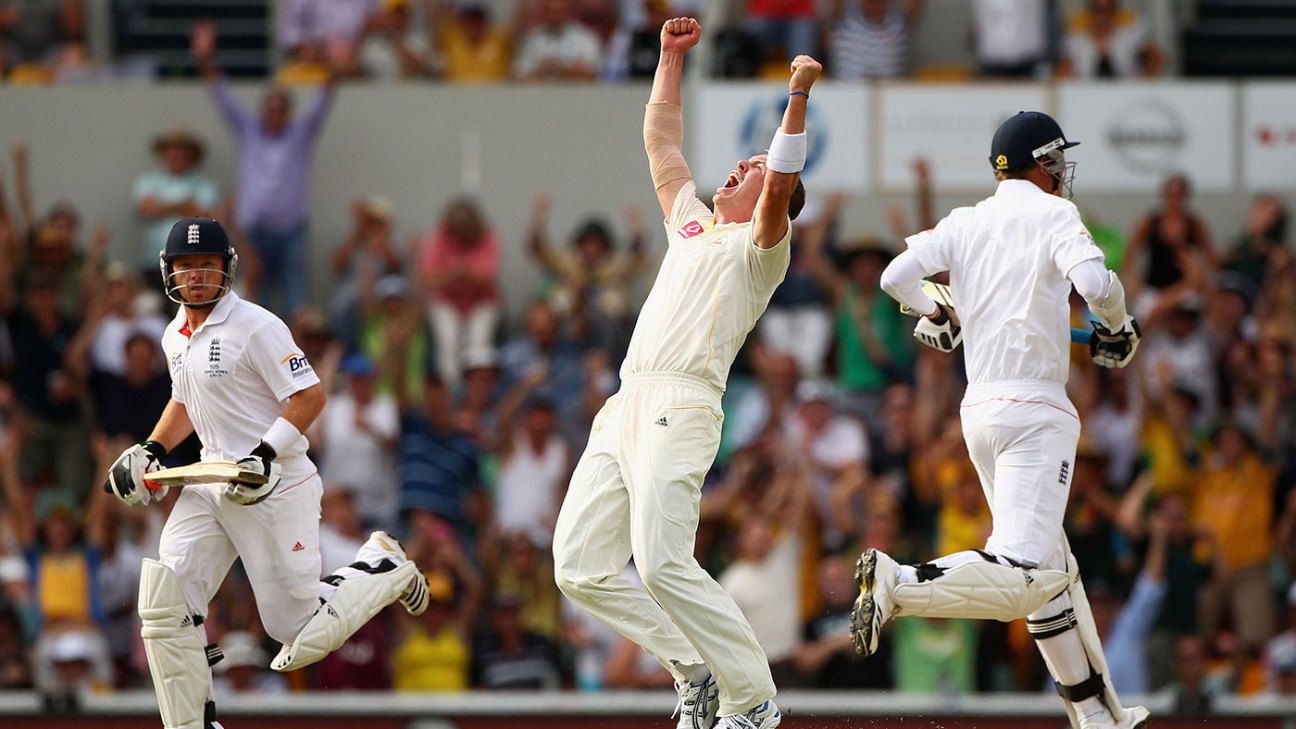 Peter Siddle announced his retirement from international cricket during the Boxing Day Test. He is one of just 17 Australians to take 200 Test wickets, finishing with 221 scalps from 67 Tests. A lion-hearted performer, he was a captain’s dream after starting his career as a firebrand in 2008 before reinventing himself as a steady, skilful swing and seam bowler later in his career where he played a key role in the retention of the Ashes in England in 2019. Here are five highlights of his Test career.

His first ball in Test cricket in Mohali 2008 rattled Gautam Gambhir’s helmet, but his first Test wicket was the prized scalp of Sachin Tendulkar. Having toiled all day on a slow pitch, he beat Tendulkar for pace with the second new ball, drawing him into a drive and producing a thick edge that flew low to slip where Matthew Hayden took an excellent catch. He bowled more overs than any of his team-mates in his debut Test in an attack that included Brett Lee and Mitchell Johnson.

Siddle’s second Test was in Perth where South Africa famously chased down 414. He took just one wicket for the match and Australia subsequently lost the series in Melbourne. In the dead rubber in Sydney, Australia got some revenge and Siddle was Man of the Match taking 8 for 113 including his maiden five-wicket haul in the first innings. The most important wicket in that match came in the second innings, as South Africa were trying to save the game when he forced the in-form AB de Villiers to chop on for 56 just before tea on the final day to set up victory. Australia would then travel to South Africa and beat them away from home. Siddle took 12 wickets in that 2-1 series victory, providing the suffocating lengths and lines that became his trademark at one end, while Johnson terrorised at the other. He took 11 of his 12 wickets in the first two Tests which Australia won.

Hat-trick on his birthday

“He’s given him! He’s given him! Peter Siddle has got a hat-trick on his birthday!” That was the iconic commentary from Mark Taylor when Siddle took a hat-trick against England in the first Test of the 2010-11 Ashes series at the Gabba. Late on day one, he found the outside edge of Alastair Cook, who would go on to have the best series of his career. He then blasted through the defence of Matt Prior first ball, before pinning Stuart Broad on the toe with a yorker to celebrate a famous hat-trick. The moment was dulled a touch by Broad’s subsequent review but it meant Siddle could celebrate twice. He told Channel Seven on the day of his retirement that he relives that hat-trick every year on his birthday and has watched the clip many times.

The other iconic moment of Siddle’s career came in Adelaide 2012 when he pushed himself to his physical limit and beyond for his country. On a flat pitch, after Australia lost James Pattinson to injury in the first innings, Siddle bowled 63.5 overs for the match to all but swing the game Australia’s way, defied only by a stunning unbeaten century from Faf du Plessis. Siddle bowled 22 overs on the final day and took three wickets including breaking the key partnership of du Plessis and de Villiers to give Australia a sniff of victory. But after claiming two of the last four scalps required he slumped to his haunches, completely exhausted, falling two wickets shy in the final over of the day.

‘The best none-for I’ve ever seen’

Siddle became an England specialist by the end of his career. He had some outstanding days in the UK including taking 5 for 21 against England in Leeds in 2009, and a Man of the Match display at The Oval in 2015 after bizarrely not playing the previous four Tests. He went two years without playing Test cricket between 2016 and 2018 before a recall from Justin Langer following a prolific county stint with Essex. Langer set him for the 2019 Ashes and questions were raised when he was selected ahead of Mitchell Starc for the first Test at Edgbaston. He bowled beautifully without luck, having catches dropped behind the wicket. His returns of 2 for 52 and 0 for 28 look innocuous but his work in combination with Nathan Lyon in the fourth innings, who took six wickets to win the game, prompted Langer to label Siddle’s spell the “the best none-for I’ve ever seen.” Siddle also made a critical 44 with the bat in the first innings. Australia were 8 for 122 when he entered and he combined with Steven Smith in an 88-run stand that swung the momentum on the opening day.