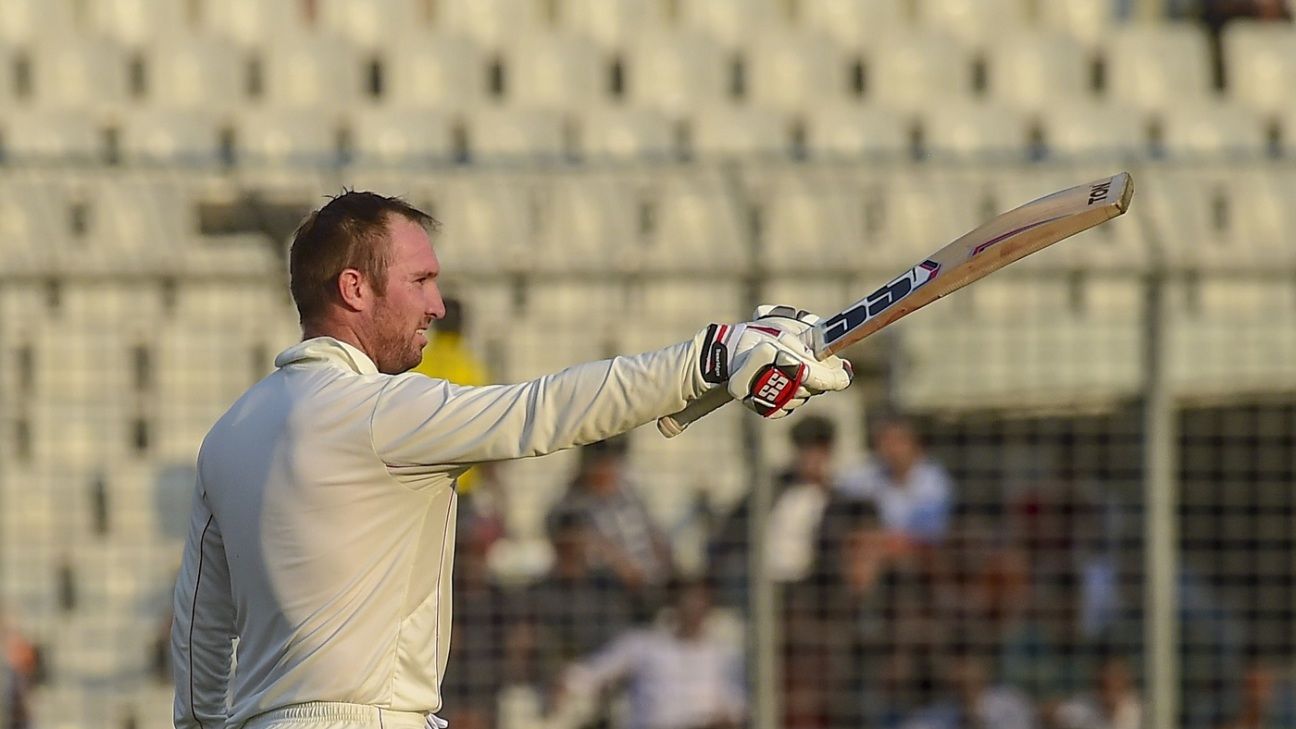 Brendan Taylor stepped down the track to loft Taijul Islam over cover in the 93rd over. That four took him to 99. In Taijul’s next over, Taylor bunted the ball towards midwicket for a couple, and brought up his first Test hundred on foreign soil, 14 years into his international career.

Soon after his career had started in 2004, Zimbabwe had slipped into a self-imposed exile from Test cricket for six years. Since their return in 2011, they’ve played only 24 Tests and Taylor has been a part of 18 of those. He has for long been Zimbabwe’s batting mainstay, across formats, and he enhanced his reputation further with his single-minded approach during the third day in Dhaka.

Against an attack that posed an uphill challenge, Taylor put together two partnerships that pushed the home side back on what is probably the most difficult pitch for batsmen in the country. After adding 56 for the third wicket with Brian Chari, Taylor put on a more enterprising 139 for the sixth wicket with PJ Moor. Both Chari and Moor struck fifties, while Taylor went onto make 110 off 194 balls.

Taylor injected intent into Zimbabwe’s reply to Bangladesh’s 522 for 7, after a slow start to the day, and showed great control. Bangladesh’s patience was tested during the Taylor-Moor partnership, which threatened to take the visitors past the follow-on mark. But, Taijul Islam’s stunning catch at deep square-leg to dismiss Taylor in the 99th over gave Bangladesh some respite.

Taylor, though, said that the innings was rewarding for him, particularly because he had promised himself to be more disciplined in his approach, after he gave his wicket away cheaply in both innings in Sylhet.

“I was pretty disappointed in the last Test match,” Taylor said. “Our second innings was going really well and I threw my wicket away, so I tried to be a lot more disciplined in this game and tried to bat as much time as possible. That’s all we have to do, bat time out of the game. We’re not going to win this game, we can only draw this game. Getting a hundred in these conditions, it’s very foreign to us, so it’s very rewarding, but it’s an uphill battle.”

Taijul, who became the third Bangladeshi bowler to take three consecutive five-wicket hauls, was Zimbabwe’s main threat. Taylor compared him to the likes of Mohammad Rafique, Abdur Razzak and Shakib Al Hasan, who had troubled Zimbabwe in the past.

“Taijul is in some serious form,” Taylor said. “He’s stepped up into the gap with Shakib not being there. When they play together, they are a very strong attack. He’s done an incredible job.

“I have played more Test matches against Bangladesh but I always felt that they are one of the harder teams to play because of their spinners. Over the years [Abdur] Razzak, Shakib [Al Hasan] and even Mohammed Rafique, they’ve always been a tough challenge, whether we play in Harare or Bulawayo. So, today is probably one of my better ones. Hopefully, we can take something out of the game and bat as long as we can when it’s going to be very difficult.”

Taylor was still hopeful of a draw that would give Zimbabwe their first overseas Test series win after 17 years.”I can’t tell you what it will mean for us,” he said. “It will be an incredible feeling and a wonderful achievement. Bangladesh have generally dominated us here for years, so even just to get a Test win was huge in Sylhet. That’s something that I will cherish for a long time.

“The discussion tonight will be that we have a lot to play for [in Dhaka]. There’s no lying down and giving up, we have to keep fighting.”