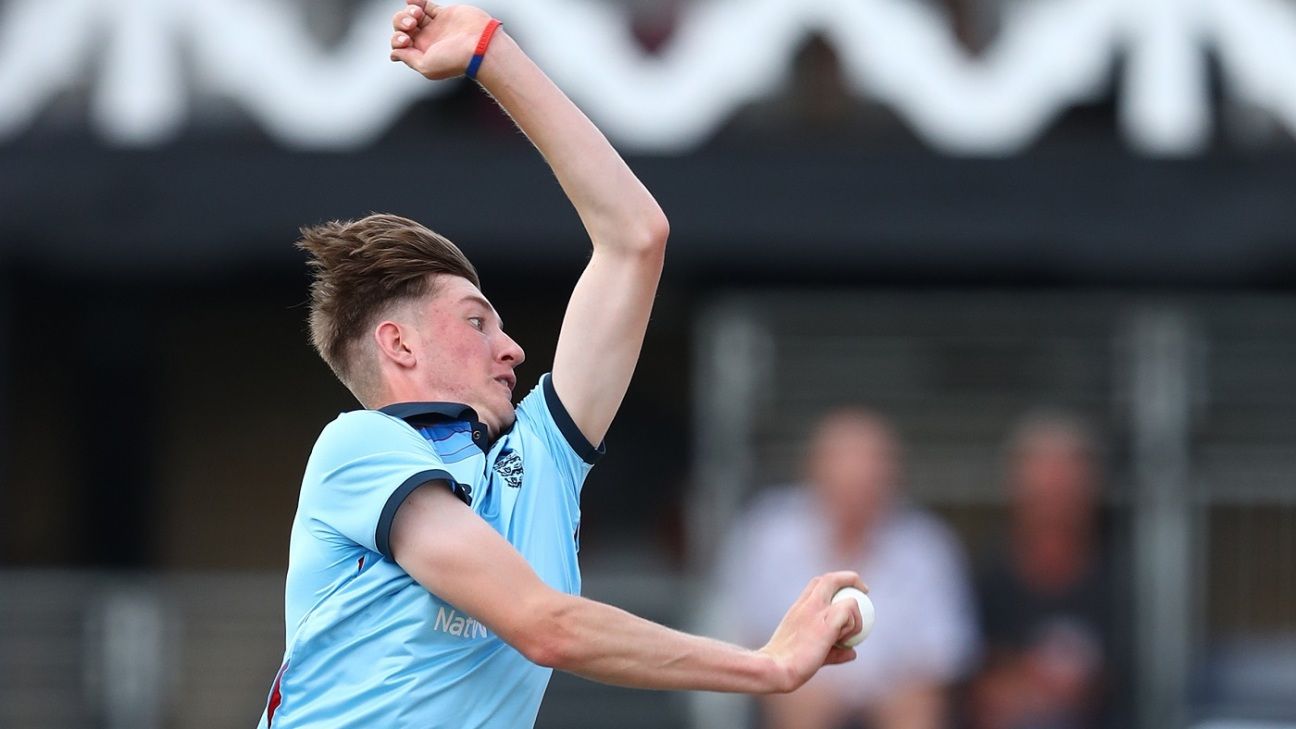 England allrounder George Hill, playing his first game of the Under-19 World Cup, finished with figures of 4 for 12 to help England bowl Nigeria out for 58 in 27.5 overs in the final Group D game at Kimberley. England, for whom this was their first win of the tournament, won by eight wickets with opener Sam Young finishing the game off with a six, as England racing to 64 for 2 in just 11 overs.

Nigeria had opted to bat first, but the England seamers reduced them to 19 for 3 early. A 23-run fourth-wicket then took Nigeria past the forties, but then offspinner Hamidullah Qadri, who also took four wickets, and medium-pacer Hill bowled them out soon after. Nigeria captain Sylvester Okpe top-scored with 16.

Young was brisk in England’s pursuit of 59, crunching five fours and two sixes in his 33-ball 39, while Hil, who batted at No.4, was not out on 7 when the winning runs were hit. Both teams will move to the Plate League stage of the tournament, having failed to come in the top two of their group. West Indies topped the group, with Australia finishing second.

Four days after being bowled out for 41 by India, Japan slumped to 43 all out in their final Group A match, against Sri Lanka. In a match reduced to 22 overs a side, Sri Lanka chose to bowl, and took just 18.3 overs to rattle through Japan’s line-up, and only 8.3 to complete their chase.

None of the Japan batsmen got into double figures, their No. 4 Debashish Sahoo coming closest with 9. Four Sri Lanka bowlers – Dilshan Madushanka, Sudeera Thilakaratne, Ashian Daniel and Navod Paranavithana – took two wickets each, with the other two coming via run-outs.

Paranavithana fell early in Sri Lanka’s chase, before Mohammad Shamaz and Ravindu Rasantha steered their side home with an unbroken partnership of 38. The result confirmed that New Zealand – whose match against Japan didn’t produce a result – joined India in the quarter-finals.

Zimbabwe beat Scotland to notch their first win of the Under-19 World Cup, with Tadiwanashe Marumani leading the way. The opener smashed 85 off just 55 balls, including 12 fours and 4 sixes, as Zimbabwe won by eight wickets in just 17.1 overs after keeping Scotland to 140 all out.

Put in to bat, Scotland were in deep trouble at 42 for 5 with the top five all back in the hut, but a lower middle-order rally prevented a complete rout. Allrounder Kess Sajjad made 68 off 71 from No.7, and was the last wicket to fall. He shared a 66-run stand for the sixth wicket with Daniel Cairns (28), and did the bulk of the scoring all through his time at the crease.

Sakhumuzi Ndlela, the right-arm medium pacer, had done the early damage, taking four of the first five wickets. He ended with figures of 4 for 27, while Dion Myers and Tadiwanashe Nyangani had a couple of wickets each.

In the chase, Marumani made it a no-contest, playing the dominant role in a 121-run stand for the second wicket that came off just 14 overs. He was out with just two needed for victory, and Milton Shumba finished things off in style, hitting a six with the scores level.

Neither of Zimbabwe or Scotland have finished in the top two of Group C though, and both will thus be progressing to the Plate League knockouts. From Group C, Bangladesh and Pakistan will progress to the quarter-finals, having finished on top of the group.