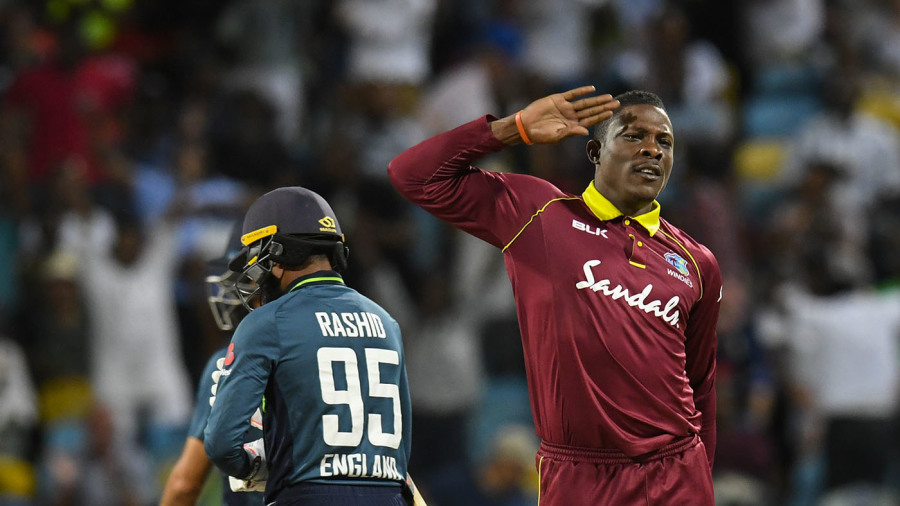 When England virtually strolled to victory in the first ODI, despite needing to produce a history making chase in the process, their status as favourites was well and truly justified. But Eoin Morgan‘s assessment that they were beaten by a better team on the day of the second match – and the resulting 1-1 series scoreline – shows how far West Indies cricket has come in the space of a month. And how much potential they have to go further.

A convincing 2-1 Test series victory, followed by a world record six-studded performance in the ODI series opener had local fans and players alike believing in this West Indies team. Friday’s 26-run victory had them partying in the packed stands and on the field.

Obviously, there are different personnel involved between the series and West Indies’ apparent revival has been in the making for longer than the duration of this tour by England – Jason Holder has been building something of note within this side since taking over the captaincy as a 23-year-old in 2014, not least confidence. There is now a feeling that, as in the Tests, this series is far from the fait accompli many expected based on rankings and recent performances.

Chris Gayle has shown his value yet again for the home side, with scores of 135 and 50 in the first two ODIs. But Shimron Hetmyer‘s classy 104 off 83 balls and Sheldon Cottrell‘s 5-46 from nine overs in their most recent match were even more encouraging for West Indies. At just 22 years of age, Hetmyer is widely regarded as a star of the future. He scored 81 in the first innings of the first Test and has already scored four centuries since making his ODI debut against New Zealand in December 2017. Cottrell, meanwhile, proved West Indies have some good depth in their fast bowling stocks, seizing his opportunity in the absence of Kemar Roach and Keemo Paul – who are both injured – and the suspended Shannon Gabriel.

There is no doubt England, as the world’s No.1 side, will rebound. They are far too good a team not to. But, if West Indies can stay on their current path and correct the poor fielding which has dogged their first two matches, it will be game-on in Grenada.

That tired old adage, “catches win matches” has not been proven in the first two fixtures of this series. Jason Roy dropped a dolly off Gayle in the first match when Gayle had scored just nine of his 135 runs but then went on to lead England’s win with his 123 off 85 balls. West Indies dropped at least three critical catches in the second match but still managed to win by 26 runs with 14 balls to spare and that was after Holder’s lament following the first match: “We just didn’t hold our chances and the chances we put down were crucial.”

West Indies have been by far the worst offenders with seven dropped easy catches to England’s two across the first two matches – that’s being generous in not counting a couple more very tough chances – and Ashley Nurse among them has put down at least three. Given that the series is locked at 1-1 and the quality of the contests so far, both sides would do well to remember that when it comes to holding onto those chances, every little bit helps.

West Indies are expected to name an unchanged side to the one that beat England. Andre Russell will join the squad tomorrow and is likely to be available for the fourth and fifth ODIs. After initially telling CWI his injured knee could not withstand the rigours of 50-over cricket, his recovery has progressed better than expected to the point where he can be considered for selection after this match.

The pitch at the National Cricket Stadium in St George’s, Grenada, is said to be good. Possible rain is forecast and, although temperatures are expected to be relatively mild, humidity could be a factor even if there are no interruptions to play.

“You need options in this day and age, Cottrell added variation, I love his energy, he’s one for the future. And it’s good to see the young players stepping up.”
Jason Holder is pleased with the emerging talent in his side.

“Collectively we need to chase a total like that in partnerships, but we failed to nail it down.”
Eoin Morgan laments England’s failure to dig in during the second-match chase