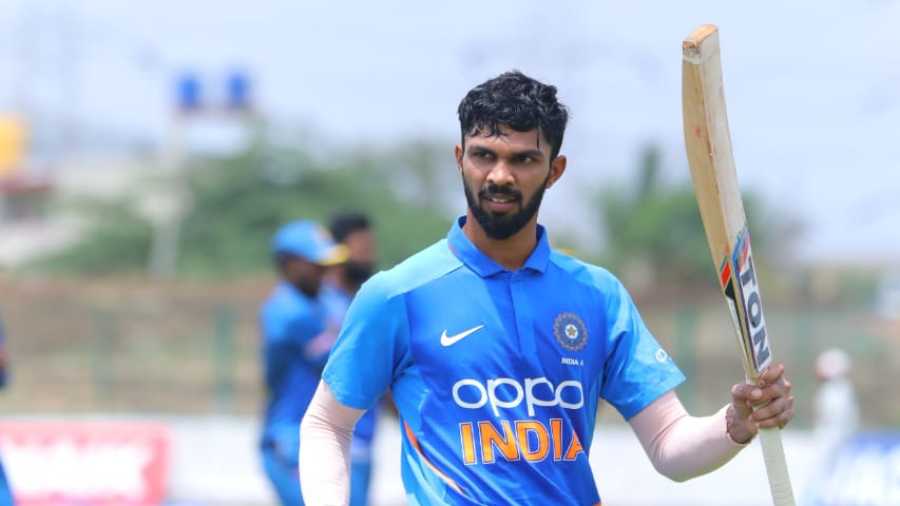 Ruturaj Gaikwad‘s 113 and Baba Aparajith‘s 101 secured India B an emphatic 108-run victory over India A in the opening fixture of the 2019-2020 Deodhar Trophy, in Ranchi. In reply to India B’s formidable total of 302 for 6, India A rolled over for a meek 194 inside 48 overs, with left-arm quick Roosh Kalaria picking 3 for 20.

India A’s decision to bowl returned little dividends. Gaikwad returned to form after an unimpressive run at the Vijay Hazare Trophy earlier this month while Aparajith extended his excellent form from the same tournament even as R Ashwin, the star bowler in the India B ranks, picked 2 for 40 off his allocated 10 overs.

India B started sluggishly, scoring 20 for 1 in eight overs, with opener Priyank Panchal falling for 3 off Jaydev Unadkat. India B, however, picked up the pace courtesy – for the most part – of Gaikwad, who attacked both pacers and spinners alike and trotted to 80 off 90 balls, before slowing down a touch with the century in sight. Dropped on 86 by Abhimanyu Easwaran off Ashwin, Gaikwad brought up his century off 117 balls, but fell lbw to Ashwin trying a reverse sweep, even though he was struck outside the line.

Aparajith carried on to bring up his sixth List A century and sixth 50-plus score this month, playing second fiddle initially to Gaikwad until he got to his half-century. The 25-year-old batsman was run out in an all-Tamil Nadu dismissal, when Vijay Shankar’s straight drive deflected off Ashwin’s hand at the bowler’s end to catch Aparajith short of his ground. Big hits from Vijay (26 off 16) and K Gowtham (19* off eight) got India B to a competitive total.

In reply, the Vijay Hazare Trophy’s top-scorer Devdutt Padikkal chopped on to Kalaria for 10 while a fiery spell from Mohammed Siraj accounted for the other opener Abhimanyu Easwaran and the No. 3 Vishnu Vinod, making Amandeep Khare join captain Hanuma Vihari at 52 for 3 in the 14th over.

Kedar Jadhav dropped Vihari at slip on 12 off Shahbaz Nadeem, with India A on 66 for 3 at the start of the 19th over. Two excellent cut shots for fours from Vihari injected vigour in his strokeplay, and with Khare he put on 55 for the fourth wicket to take India A past 100.

Vihari then added 61 off 70 balls with Ishan Kishan, who was run out by an excellent throw from the deep by Vijay at the bowler’s end. The dismissal of Vihari for 59 two balls later decided the eventuality of the match to a great extent, leaving India A teetering at 168 for 6.

Ashwin and Unadkat fell in quick succession, while an offcutter from Kalaria ended Shahbaz Ahmed’s 25-ball 18, bringing the game to a close as the injured Sandeep Warrier was retired hurt and didn’t come out to bat.

Vihari’s India A will face India C, led by Shubman Gill, on Friday at the same venue.