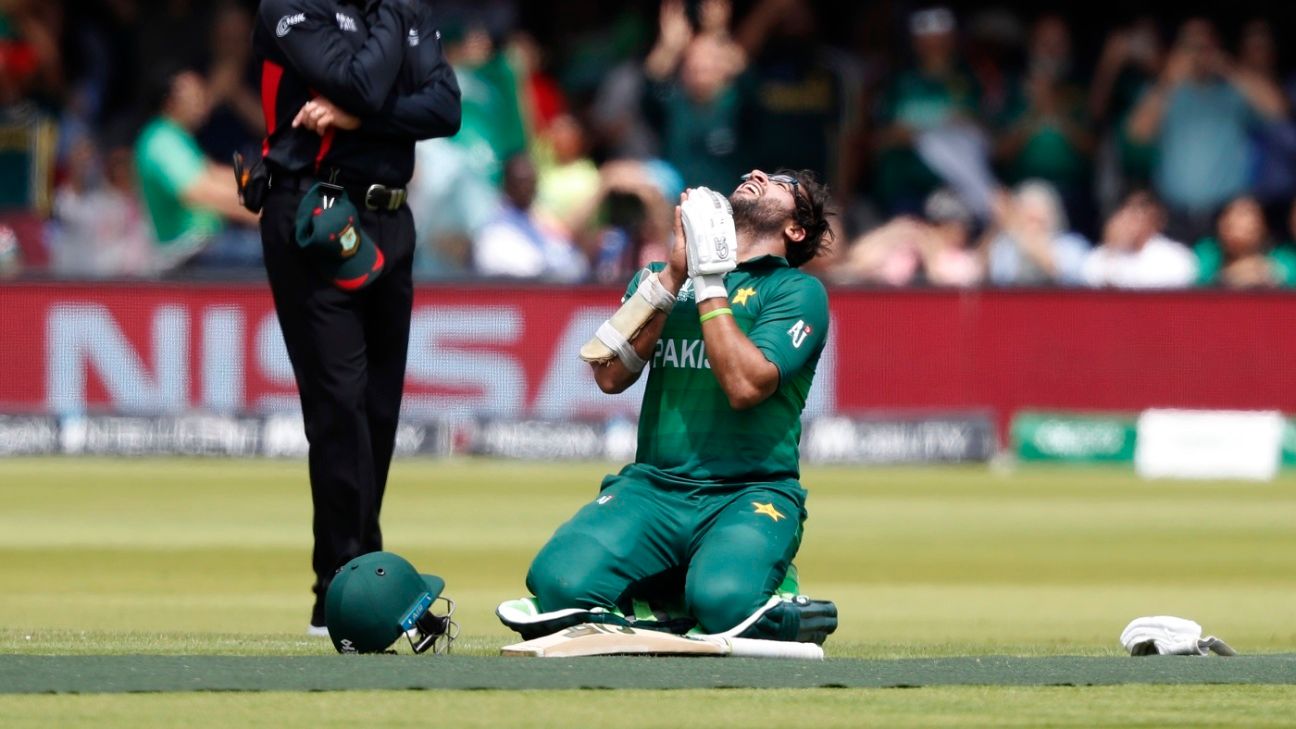 It’s a big point of interest in cricketing circles in Pakistan – Inzamam-ul-Haq‘s tenure as chief selector is over following Pakistan’s 2019 World Cup campaign. The PCB is currently reviewing the national team’s performance since 2016, and there is uncertainty over whether Inzamam will get an extension. What, then, does Imam-ul-Haq‘s future look like? “I don’t care about the pros and cons of my relationship with him [Inzamam, his uncle],” the youngster said in a press interaction in Lahore on Tuesday.

Imam, 23, made his international debut in an ODI against Sri Lanka in Abu Dhabi in October 2017, and has played all his cricket for Pakistan with Inzamam as the selection boss. He had a decent but unspectacular World Cup, scoring 305 runs in eight innings at an average of 38.12 and a strike rate of 76.25, hitting one century and one half-century. But his overall ODI average is an excellent 54.58 and he has formed a formidable opening partnership with Fakhar Zaman over the past couple of years.

His presence in the Pakistan team has been a subject of debate all along, though, but Imam isn’t too fussed about the criticism.

“This is something that you people, the media, speak about,” Imam, addressing the media alongside Babar Azam at Gaddafi Stadium, said when asked the nepotism question – not for the first time. “Our public is innocent and they believe whatever they are told. I believe in Allah. I am playing because he has destined it to be so.

“t was a good campaign as we won five out of nine and couldn’t qualify because of our net run-rate. We are also disappointed for that, as are our fans”

“But such talk has taught me a lot and made me strong mentally. It does hurt, but I try to take it positively. It is true that even if I perform in ten matches but fail in two, I am criticised. But I try not to be bothered and try to win my fans over with my performances. Neither you nor I can say what my future is. It is only Allah who knows. My responsibility is to perform and the rest is on up to the PCB.”

Imam has the runs, especially in the 50-over game, but has often been too slow in gathering his runs; his strike rate is among the poorest among those with at least 1000 runs since the 2015 World Cup.

“I do feel that I can improve my career strike rate from where it is today,” he said. “But, we have to realise my role in the team. I open with Fakhar, who is an aggressive batsman. He is given the role to play aggressive cricket while I have to anchor the innings. Babar and I have the same roles. Sometimes the opposition bowls well and you have give them the respect because of which things don’t go to plan for us. But whenever either of us has batted deep, we have touched 300-310.

“I am still in the process of learning and you continue to learn in international cricket with every new challenge. I still feel I am very young. I am very confident in my abilities and blessed to have team-mates who keep backing me. A player cannot be satisfied with his performances and I want to set the bar high for myself and continue to grow. Once I start to feel satisfied, I will stop learning.”

At the World Cup, only Babar [474 runs] scored more than Imam for Pakistan, but Imam’s numbers got a boost because of his run-a-ball hundred in the final league game against Bangladesh, earning him a mention on the Lord’s Honours Board too. He had scored 44 and 53 against England and Australia respectively, but wasn’t able to carry on.

Asked if more runs from him might have helped take Pakistan to the semi-final, he said, “I also feel the same way. I would have been very happy personally had I performed in the main matches, which would have benefitted the team. I was trying to score big and follow up on my performances from the series against England [234 runs from four innings, at a strike rate of almost 90]. But sometimes things don’t turn out as planned. Perhaps we could have qualified had I started to perform earlier.

“We will learn from our experience. It was a good campaign as we won five out of nine and couldn’t qualify because of our net run-rate. We are also disappointed for that, as are our fans.”