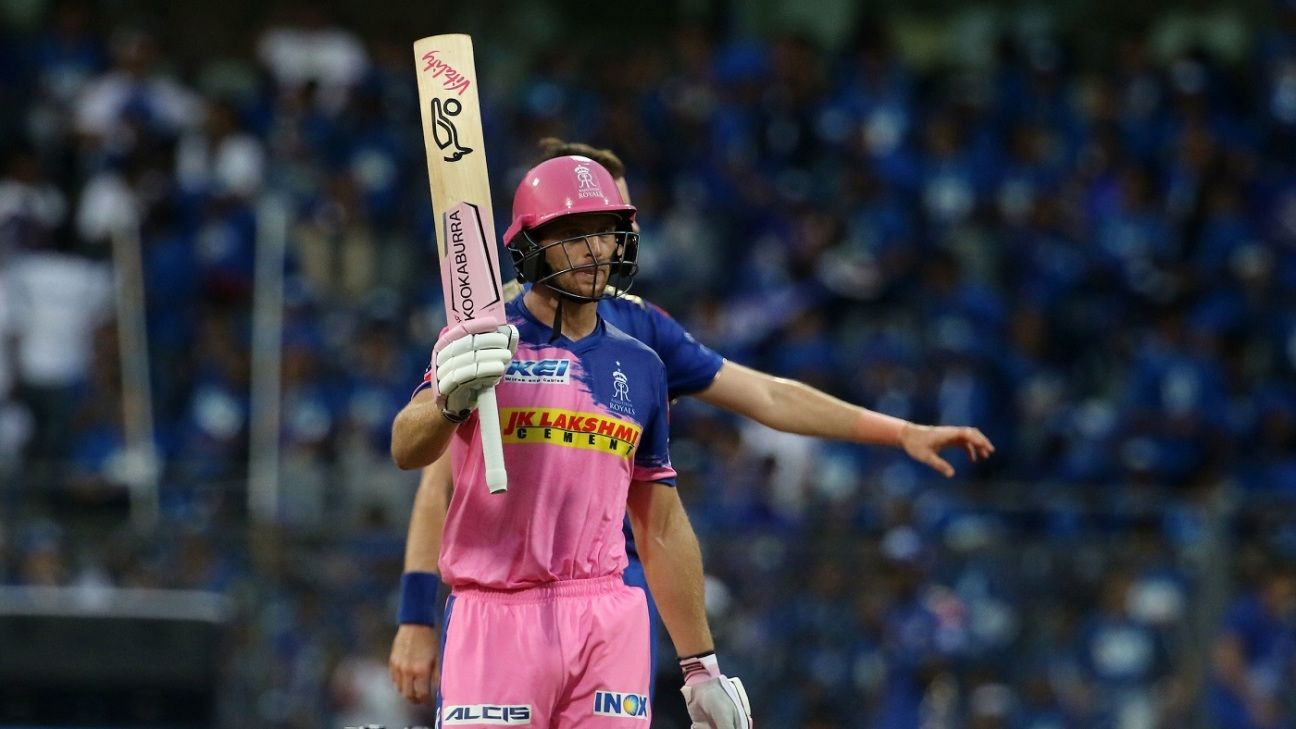 Jos Buttler was making a mockery of a chase of 188 and was in such outrageous form that he hit each ball of the 13th over to the boundary. And Rajasthan Royals, from needing 70 off 48 balls, were suddenly looking at an equation that said 42 off 42. Then it said 30 off 30. Then 20 off 24. Then… Well, this happened.

16.2 Bumrah to Smith, no run, shortish and outside off, run away to point

16.3 Bumrah to Smith, no run, short and skidding into the body of Smith. He pulls, misses, and cops a glancing blow on the mid-riff

16.5 Bumrah to Samson, OUT, full and straight at 142.1ks, Samson shuffles a fair away across off, plays across the line, and wears it on the front pad in line with middle and leg. Samson has been given out lbw, he chats to Smith and calls for a review. The tracker returns umpire’s call on leg stump and Samson has to go

Tripathi. A slip in place

16.6 Bumrah to Tripathi, 1 run, on a length and around off, dabbed to third man

Jasprit Bumrah, among the best all-format bowlers in the entire world right now, just keeps doing his thing. But you’d still think the game was firmly in Royals’ hands. After all, they still needed only 17 off 18 balls

17.1 KH Pandya to Tripathi, OUT, tossed outside off, Tripathi holes out to deep midwicket. He drags a slog-sweep against the turn and across the line. Caught Hardik Pandya bowled Krunal Pandya. What’re you doing, Rajasthan Royals?

17.2 KH Pandya to Smith, no run, dropped short and wide, cut off the back foot but can’t get it past point

17.3 KH Pandya to Smith, 1 run, flatter and shorter outside off, hauled away to wide long-on off the back foot

17.4 KH Pandya to Livingstone, 1 run, chopped from off stump to short third man

17.5 KH Pandya to Smith, 1 run, slower and spinning away outside off, chipped down to long-off

17.6 KH Pandya to Livingstone, OUT, Oh dear, the Royals continue to tumble. Drifts in on middle, full and straight. Livingstone drops down to one knee. He goes for an almighty slog-sweep like Tripathi had done earlier this over. He can’t touch it. And Krunal rattles the stumps. Six runs and three wickets off the last two overs

A nervous team was in full-blown panic now. Royals rely on their top order for nearly all of their batting strength and with Ben Stokes sitting out with illness, Mumbai Indians were starting to believe. Especially because it was time for Bumrah to run in again with Royals needing 14 off 12

18.1 Bumrah to Smith, OUT, Has Smith nicked off? The finger goes up and Smith walks off. Bumrah ventures wide of the crease, angles a length ball into Smith and then gets it to straighten away. Smith has a flat-footed waft and feathers it behind to Kishan

18.2 Bumrah to Gowtham, 1 leg bye, 141ks yorker from wide of the crease, Gowtham falls over. This yorker is just too good for him. But, this seems to be heading down the leg side. Not given, Rohit challenges the on-field not-out decision.

18.3 – Bumrah to Gopal, 2 runs, back of a length and outside off, punched on the up straight of Joseph at mid-off. Joseph chases hard and slides at the edge of the boundary. He jams his right shoulder into the turf and writhes in pain. The Mumbai team doctor is out to tend to Joseph

18.4 – Bumrah to Gopal, no run, short and bursts in from wide of the crease, Gopal backs away. Wafts and does not make contact. Was there a tickle on that? Nope

18.5 – Bumrah to Gopal, FOUR, 144.8ks short and outside off, the extra pace of Bumrah works against him. Gopal manufactures some swinging room and scythes it away fine of deep third man for a crucial four

18.6 Bumrah to Gopal, 1 run, edged and dropped by Kishan to his right.Sharp chance. Gopal makes room again, this is much fuller and swerving away. Draws a healthy outside edge, but Kishan can’t cling on

Royals need six off six balls with four wickets in hand. Hardik Pandya to bowl it

19.1 – HH Pandya to Gopal, 2 runs, Mid-off runs back, dives, but this skier eludes him. Fuller on off, Gopal swings for the hills, slices it in the end and gets away

19.2 HH Pandya to Gopal, no run, banged in short on middle, backs away. Swings again and misses

19.3 HH Pandya to Gopal, FOUR, full and outside off, Gopal backs away, manufactures swinging room and scythes it up and over mid-off. He wins it for the Royals.