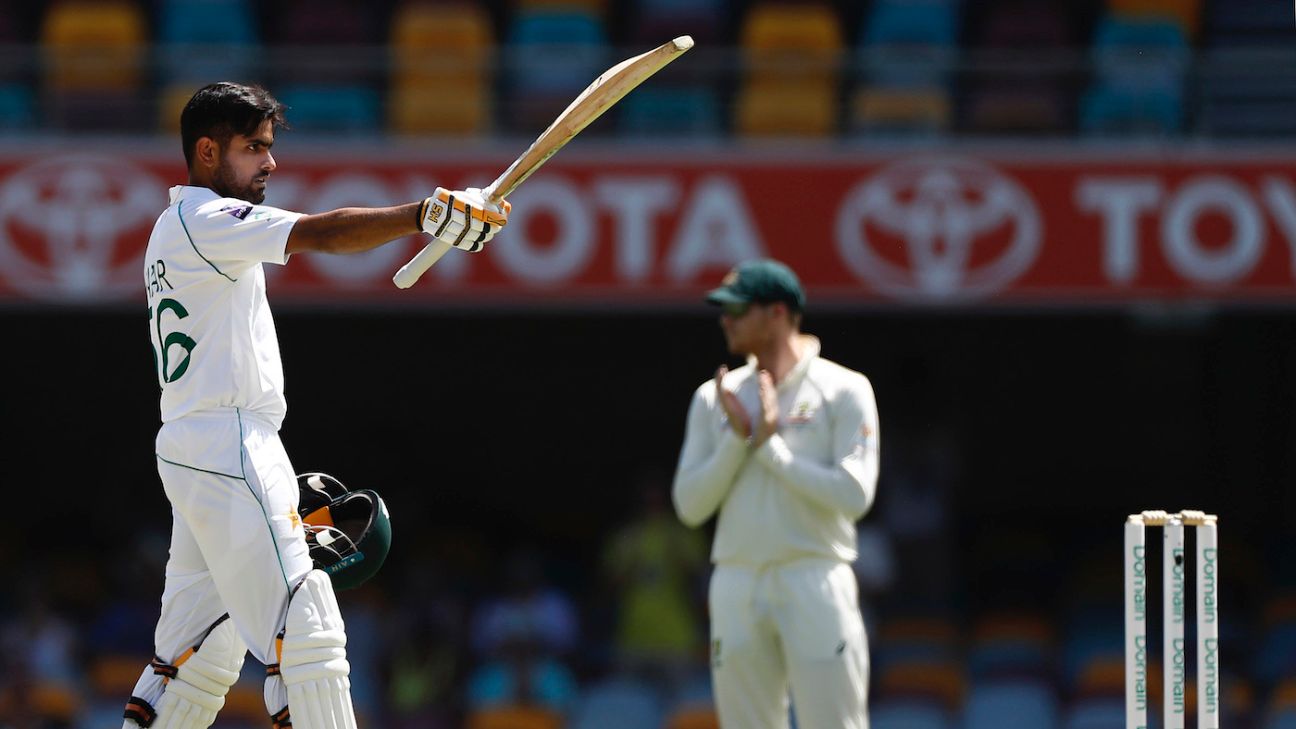 Regret from an uncharacteristically careless early swipe in the first innings led Babar Azam to a second Test hundred, cementing his growing reputation among the world’s foremost all-format batsman. Azam’s hundred, alongside Mohammad Rizwan’s 95, provided some resistance on the fourth day at the Gabba, though ultimately not nearly enough to prevent an innings defeat, and a 13th straight loss in Australia.

Azam drove expansively at a wide delivery from Josh Hazlewood just four balls into his innings on the first day, part of a post-lunch collapse that wasted a sound start and eventually saw Pakistan fall to a distinctly underwhelming 240 all out. That dismissal was not only out of sync with his white-ball prowess but also a burgeoning body of Test performances.

So good has his white-ball game been that it sometimes overlooks his steady rise in Tests. Since the start of 2018, he is Pakistan’s leading scorer in the format. An overall Test average of 36.21 masks that surge: he is averaging 50.88 since 2018 and has seen his Test average rise from less than 24 at that point. No Pakistani batsman has more than his nine 50-plus scores in that run, which includes two hundreds, a 99 (also against Australia, last season) and an electric battle or two with Dale Steyn.

He came to these shores as Pakistan’s T20I captain and runs in the three-match series as well as in the warm-up games meant expectations going into Brisbane were high. No less an authority than Ricky Ponting had identified him as the one batsmen he wanted to watch this series.

“There was no pressure [around the hype],” Azam said. “That is my shot [the drive he edged first up] but I went and played it too early, which I shouldn’t have done. I had a lot of regrets about that. So I practiced a lot on leaving balls that are slightly wide, and I applied it to my second innings. I went and took an unnecessary chance early on in my first innings and I shouldn’t have done that.”

The discipline second time around was notable, not least in surviving a testing early spell from Hazlewood, who has dismissed him five times so far in Tests. But for much of the rest of it, he moved unperturbed to a second hundred, an innings stuffed full of not only the off-side whips and drives on which he has built his reputation but also an accomplished technical base.

“I focussed a lot on my concentration, especially after I reach 50,” Azam said. “I want to look at how I can make it a big knock. So I try to maintain the same focus for the second 50 as I do for the first. I didn’t work separately with anyone. Test cricket teaches you all this. When I was failing to convert [earlier in his career], I sat and analysed why I am flopping. I just changed my mind-set and have given 200% on my concentration.”

Inevitably and understandably given he is Pakistan’s best batsman, there will be discussion at some point about Azam moving up the order. He has moved up and down, beginning his Test career at No. 4, moving up one spot immediately before eventually moving down the order to where he is now: mostly at No. 5, with occasional forays at six. His highest average is from six – nearly 45 – but he won’t stay down there long.

“When I started Test cricket I had no number since Younis bhai and Misbah bhai were still around,” Azam said. “At times I would also bat five or six. I batted No. 3 when I came to Australia last and then went off to No. 4. It’s not like they didn’t give me a number. It was based on the team’s requirement and the plan. I don’t ask for a number to bat at. My job is to perform regardless of where I bat.”

Not that there is much of a sample yet to pick from but Azam did agree his hundred here was his best – or, more accurately, the better of his two Test hundreds thus far. “You can say that (it was my best). Scoring runs in Australia is very difficult. They play very well and bowl really well in their home conditions. To perform against them you get extra confidence, which I’ve got from scoring this hundred.”