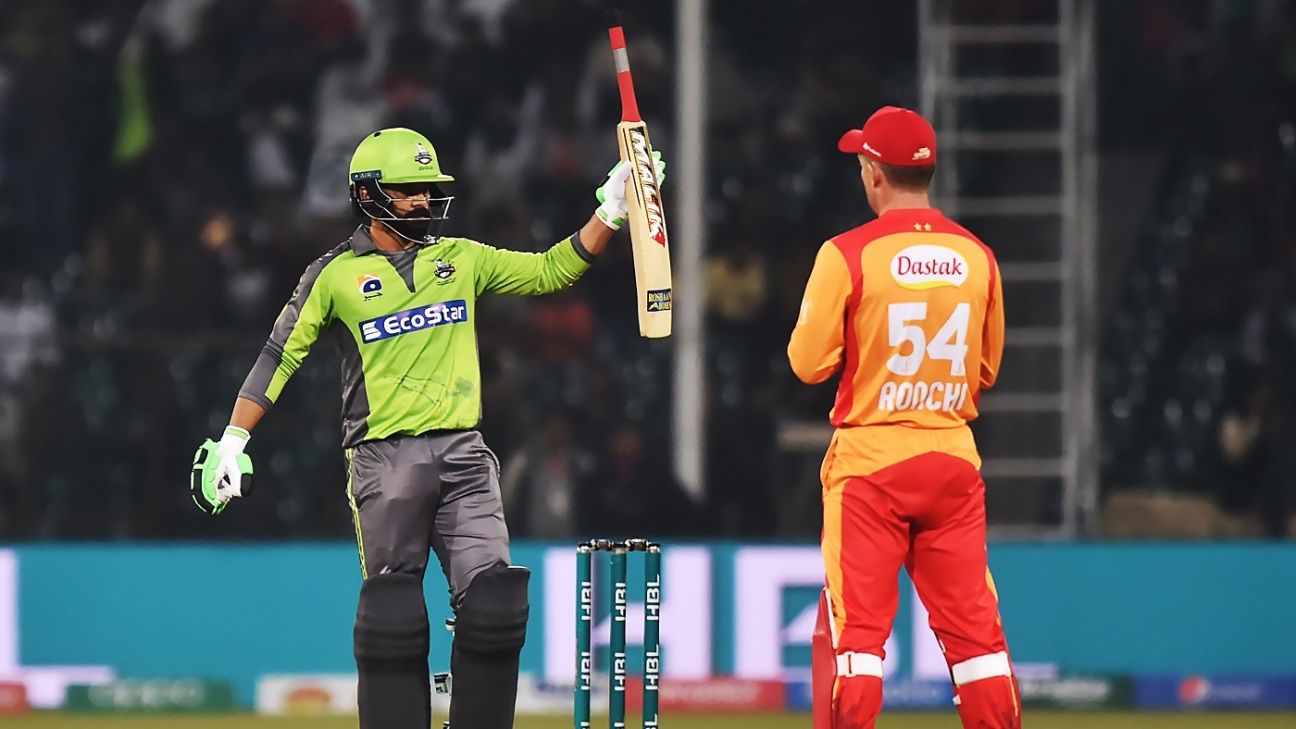 In a strongly worded reprimand to Mohammad Hafeez, the PCB chief executive officer Wasim Khan said the batsman should be “focusing on his own cricket” instead of giving opinions on “right and wrong” after Hafeez questioned the return of Sharjeel Khan to competitive cricket.

Sharjeel had received a five-year ban from the PCB for the role he played in the PSL corruption scandal from 2017. The board suspended his sentence following an “unconditional apology” in August 2019, paving way for a sooner-than-expected comeback. Even so, it seemed unlikely that he would play in this year’s PSL until the Karachi Kings bought him at the auction and deployed him as their opening batsman.

Sharjeel could only make 199 runs from 10 matches, which raised questions about whether he was physically fit enough to play at the top level. Hafeez was replying to one such question on Twitter when he said, “Shouldn’t we set Standards of Dignity & Pride Higher than any other “Extra Talent” to represent Pakistan.”

The PCB CEO didn’t take kindly to that. “Current players should not be going up on social media to criticise other players or talk about what policies the cricket board should or shouldn’t have,” Wasim said through a video link from Lahore. “They can have their opinions about various things about world cricket and cricket in general but not about the rights and wrongs of players and the boards and they should leave that to cricket board to answer.

“I will be personally speaking to Mohammad Hafeez about that and I don’t think it’s his place to be doing it. No other player in the world does that so why should our Pakistani players do that? I don’t think they have any space to do that and I don’t think they should be doing that. That’s my personal view. Coming from an English environment, I never saw an English player tweet about policies, procedures, talking about other players’ right or wrong. My view is, he should focus on his own game, focus on the cricketing opinion he can give but don’t give personal opinion about other players.”

This is not the first time Hafeez has questioned a player on his return from a ban. In December 2015, he and current Test captain Azhar Ali stayed away from a training camp ahead of a tour of New Zealand because Mohammad Amir, who was returning from a spot-fixing ban, was picked to be a part of it. Both of them eventually joined training after the PCB intervened and have since played several matches alongside Amir.

Sharjeel was a promising talent for Pakistan before his ban. He played 25 ODIs, 15 T20Is and one Test and in that time cultivated a reputation for being a hard-hitting batsman. PSL 2020 was his first taste of action in over two years. The 30-year-old had to miss the whole of the Pakistan domestic season since he was still undergoing the rehabilitation part of his sentence.

“He has done his time, whatever was set,” Wasim said. “He has carried out that ban. He is back and was picked up by a franchise and he is available to play again. In terms of him getting selected [for Pakistan] going forward, that is up to the selectors. There is a long way for Sharjeel Khan to go before he is considered to play for Pakistan again.

“First of all, there is an importance around fitness. [Head coach] Misbah[-ul-Haq] had said that verbally and he is emphasising the policy on fitness with us as well and [bowling coach] Waqar [Younis] has also spoken about it as well, that we are moving in a different direction.

“One of the things Sharjeel Khan could have done in his time when he wasn’t playing and inactive is that he could have got himself fit. In your life, you have controllables and non-controllables. Fitness is controllable, what goes in you mouth, what you do, how you keep yourself fit, that is all under your control. If you are serious about playing for Pakistan, get yourself fit. There is no excuse.

“I am sorry but I am a stern believer that he turned up playing PSL unfit. He will not get selected for Pakistan as long as he stays the way he is. He now has a few months – get yourself fit, show that you have an ambition to play for Pakistan, show you have commitment and desire to get yourself fit and then you will be considered. I am sure Misbah and the selectors are looking it at that way – they have a policy and it’s important that people abide by that.”