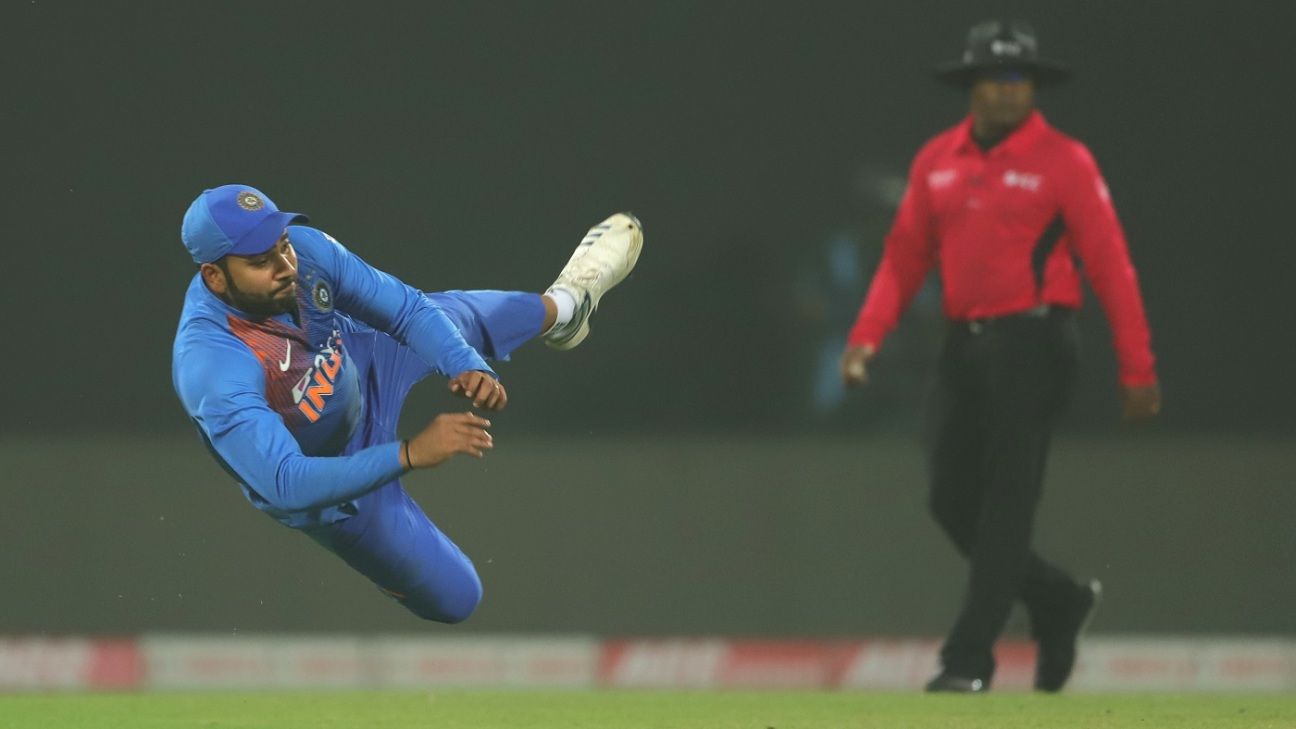 India are the top-ranked Test side in the world, and only behind England in ODIs, but they haven’t quite been up there in T20Is, where they are currently fifth in the ICC rankings. For India’s stand-in captain Rohit Sharma, though, it’s not something to lose sleep over. With the next T20 World Cup just under a year away, he says the focus is on strengthening India’s bench, while not compromising on results.

“Of course this a format where we are trying a lot of players,” Rohit said at a press conference ahead of the second T20I against Bangladesh in Rajkot, when asked why the team wasn’t up among the best in the format. “The key players are not involved so we’re trying a lot of younger players in the lot, sitting on the fringe.

“Probably that’s one of the reasons, to be honest. The other formats, we have our entire squad playing the game. You get what you want from that squad. This is a format where you can try [other players], and there’s no harm in that.”

India have won just two of their five T20I series since November 2018, both wins coming against tenth-ranked West Indies. Following a whitewash at Australia’s hands earlier this year, they lost a series against New Zealand and drew one against South Africa. A loss in the first T20I against Bangladesh in Delhi has led to questions being asked anew.

“We’ve seen a lot of players who have emerged from this format and have gone on to play ODIs and Tests. We want our bench strength to be as strong as possible so this is probably the reason why you see so many new guys coming into the fray”

India are without regular captain Virat Kohli, MS Dhoni continues to be on an indefinite break, and a number of fast bowlers including frontman Jasprit Bumrah are missing at the moment.

“We want to try a lot of players and make then ready for other formats,” Rohit said. “This is the format where these individuals can come out and express themselves so they’re ready for ODI and Test cricket also. We’ve seen a lot of players who have emerged from this format and have gone on to play ODIs and Tests. We want our bench strength to be as strong as possible so this is probably the reason why you see so many new guys coming into the fray.

“It doesn’t mean that we have to not win games. Winning is the priority, but again these guys will learn from it. This is how a lot of guys, including me, learnt. That’s how it happens.”

India have handed four T20I debuts this year, to Navdeep Saini, Mayank Markande, Rahul Chahar and Shivam Dube. While Markande did not get another chance after his debut against Australia, the other legspinner, Chahar, who made his debut against West Indies in August, was included in the squads for the games against South Africa and Bangladesh. Dube earned his maiden call-up in the Delhi T20I against Bangladesh, while Saini has missed out because of injury.

In the first T20I against Bangladesh, the relatively inexperienced bowling attack was handled competently by the seasoned Mushfiqur Rahim and Soumya Sarkar. Young Khaleel Ahmed, given the job of bowling three overs in the last six, went for 18 runs in the 19th over, which pretty much sealed the game for Bangladesh, leaving them needing just four off the last over.

“Bowlers need to come and get crucial wickets and defend the score. That’ll be the idea. We aren’t focusing on one department. We lost as a team and not as individuals.”

Another area that has come under the spotlight is India’s cautious approach while batting in the Powerplay; they only scored 35 in the first six in Delhi.

“Conditions were not ideal,” Rohit, who lost his wicket in the first over of the match, said. “The pitch was a little soft. The shot-making was not easy, so we have to assess and see what sort of score we want in the first six overs, then seven to 15, and the last five overs. You have to break it down like that. When you are playing on a pitch like that, you’ve to see what the ideal score would be to defend. That was the idea. But if the pitch is good you’ll see a different team India approach tomorrow.”