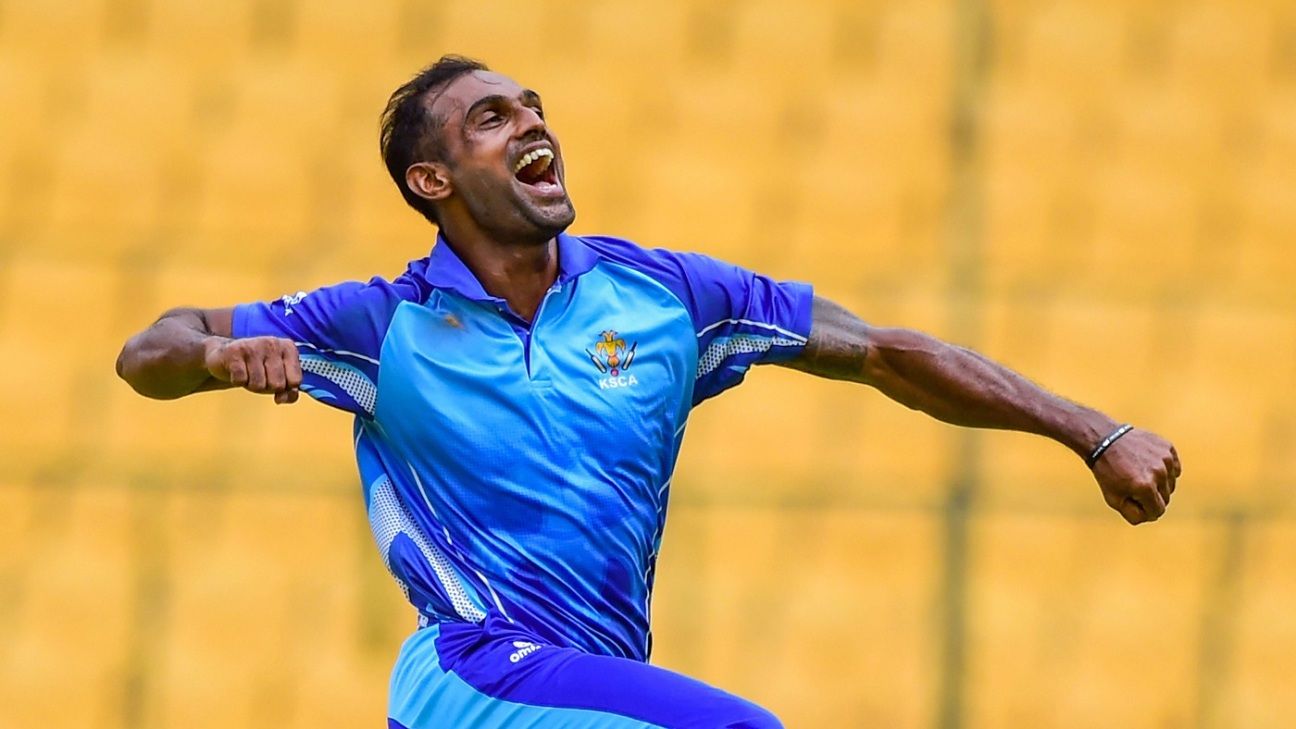 Abhimanyu Mithun is having a domestic season to remember. First, he picked a birthday hat-trick and a maiden five-wicket haul during Karnataka’s win over Tamil Nadu in the Vijay Hazare Trophy final last month. On Friday, he not only picked another hat-trick but became perhaps the only bowler to pick five wickets in six balls in T20 history. At least no bowler has those many in matches ESPNcricinfo has ball-by-ball data for.

Mithun’s feat came in the semi-finals of the Syed Mushtaq Ali Trophy – India’s domestic T20 competition – against Haryana in Surat. Coming into his fourth over after conceding 18 off his third – the most expensive over of the innings – Mithun’s strikes prevented them from going past the 200-run mark.

Before Mithun started the over Haryana were rampant at 192 for 3, with Himanshu Rana and Rahul Tewatia having stitched a robust partnership. stitching a robust partnership already. Between overs 15-19, Haryana had picked 57 runs, and a 200 plus score seemed on the cards. But Mithun had plans up his sleeve – slow the pace down, and it worked.

Rana, who had blasted his second fifty in the tournament, his highest in the format, mistimed a pull straight into the hands of Mayank Agarwal at deep midwicket. Tewatia then holed to wide long-on. Mithun achieved his maiden hat-trick in the format after Sumit Kumar failed to read a slower one and scooped one sraight to square leg.

Off the next delivery, he bowled a knuckle ball that Amit Mishra mistimed to cover to become the second bowler after Lasith Malinga (against New Zealand in September) to take four wickets in four balls (in the same over) in T20 cricket this year. A back-of-the-hand slower delivery which Jayant Yadav did not read was easily pouched by KL Rahul behind the wicket to complete the fifth.